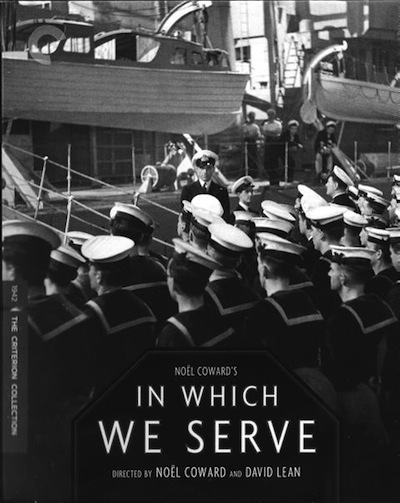 All you need to know about the demeanor of 1942’s In Which We Serve comes from a scene three-quarters of the way through the nearly two-hour movie. A sailor of a lesser rank receives a letter that says his superior’s wife and mother have been killed in the blitz, and he has to go and tell the other man the bad news. They speak plainly, their voices maintaining a hushed reverence. It’s the epitome of the cliché of British reserve. Forget the upper lip, everything is stiff. And if you want to know just what kind of drama this propaganda production is, the scene ends with the younger man telling the older patriarchal figure that, though that fellow’s family is dead, his own wife survived and had a baby. One generation passes away, and another carries on.

The first collaboration between David Lean and Noël Coward had one specific purpose: to celebrate the troops and prepare a nation at war to handle the hard times ahead. There will be loss and heartbreak, but there will also be much to be proud of. The British Navy? Best there is! 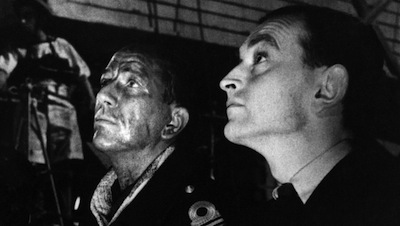 In Which We Serve is a somber picture. It was instigated by Coward, who not only wrote, but he co-directed with a young David Lean and also starred in the movie as Captain “D.” Lean had worked on other movies, editing notable pictures like Anthony Asquith’s Pygmalion and the Archers’ own propaganda piece The 49th Parallel [review]; however, excepting some uncredited work directing sequences of Major Barbara [review], he had never worked behind the camera. Coward brought him on to aid in helming this dream project: a tribute to the Royal Navy that would attempt to portray true naval life. In this, In Which We Serve is successful. It’s one major recommending point to this day is its incredible footage of the naval ships being built and operated. It’s celluloid as essential to the historical record as any wartime documentary.

This stuff is fascinating, as is some of the battle footage. The filmmakers don’t overdue it in the combat scenes. The visual language for overly dramatic fight sequences was perhaps not yet developed, but there is something riveting about the unadorned nature of the skirmishes here. Shot from the ship’s deck, these scenes largely feature men taking coordinates, loading guns, and firing as the German ships circle back and forth, emptying ammo clips and dropping bombs. Sure, it’s a little dry, but the whole of In Which We Serve is dry. Even when it is melodramatic, it’s as dry as Noël Coward likely preferred his martinis.

The careful measurement of In Which We Serve’s narrative is both a fault and a virtue. While it likely served to rally the British people behind their armed services without hitting any regrettable racist caricatures or resorting to jingoist language, the lack of blood and guts ultimately drags. In Which We Serve is a long movie, easily too long. The upside is that Coward has invented a fantastic structural conceit for the film. 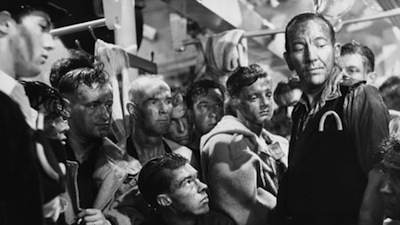 In Which We Serve begins out on the ocean as the HMS Torrin contends with a Nazi squadron. They end up beating the German’s ace pilot, but not before he delivers a crushing blow. A handful of men make it overboard, and they cling to a life raft, watching their ship sink and reminiscing about what got them there. The main focal points are the Captain (as played by Coward), and two men in his service, one an officer and one a lower-ranked enlisted man (the ones mentioned at the outset, and played by Bernard Miles and John Mills). We see the captain’s family, complete with wife (Celia Johnson) and kids, alongside the officer’s childless but loving marriage and the younger man’s new romance. He marries just before shipping out (his wife is Kay Walsh). The back-and-forth structure, including the captain’s own underwater reverie, dreaming of his beloved in anticipation of drowning, allows us to see how the camaraderie of warriors develops and also look at the consequences back home. How the battle affected the loved ones who were left behind must have been of utmost concern to the English populace.

All of the lead actors are very good, with Mills being the most memorable as the always-genial Shorty Blake. The most striking supporting performance, though, comes from a very young Richard Attenborough, stepping on screen a few years before his creepy star turn in Brighton Rock. Here he plays a disgraced soldier getting a second chance. Attenborough makes for a very convincing onscreen drunk.

Despite neither Lean nor Coward having directed before, and forgiving the overlong running time, they show an assured hand while dealing with an extremely ambitious, complicated production. Combat footage is never easy, and I would guess particularly not on the water. In Which We Serve never looks faked or chintzy. It’s a quality war picture, and even if it is totally dated, it serves its purpose. 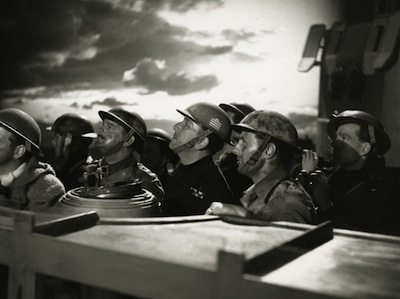