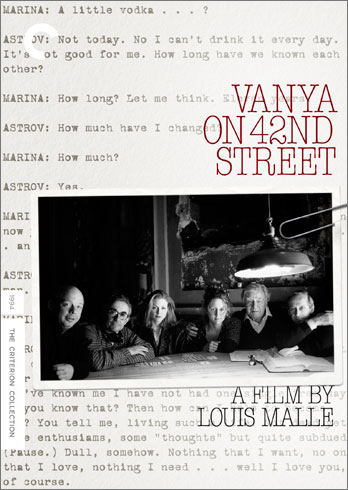 In 1981, Louis Malle teamed with theatre director André Gregory and actor Wallace Shawn to challenge the common perception of what belonged on a cinema screen. The film My Dinner with André [review] famously showed little more than two men on a night out, talking art, philosophy, and life over a meal. The result was surprisingly riveting. My Dinner with André remains a true cult hit amongst the art-house set.

More than a decade later, the three joined together again, with Malle filming Gregory's off-off-Broadway production of a David Mamet translation of Anton Chekhov's Uncle Vanya. I say off-off-Broadway facetiously: the performance was not on a traditional stage, but within the space of a long disused theatre. In fact, the stage itself was unusable, having long ago given over to decay--a kind of fitting metaphor for Chekhov's drama, which itself has themes of age and obsolescence. In 1994, and even now, theatrical drama was facing its own increasing unimportance in the realm of popular entertainment. Home video, the internet, you name it--it's probably getting more traction than theatre.

Somewhat ironic, then, that cinema could be used as a tool to show how vital live drama really can be. Vanya on 42nd Street is a spartan, yet effective chronicle of one of Gregory's cast rehearsals. Indeed, Malle prepares a little dose of "reality" at the start. The director and his cast meet on the street and enter the space. As the play begins, we see Gregory and a few spectators watching from chairs just a few feet away from the players. At the act break, André calls for everyone to take a break. This is acting! It is theatre! It is not real, it is performance! 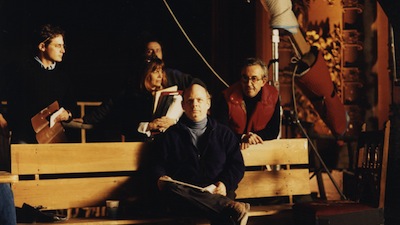 The trick here is that, as Vanya on 42nd Street goes on, Malle breaks the illusion less and less. We stop seeing André Gregory, we stop seeing the tagalongs, and as an audience, we stop being aware of the unconventional space. The performance is purely theatrical, but the filming and editing (by Nancy Baker, who also edited Harlan County USA), simplistic as they may be, are purely cinematic. What we thought we were getting--a detached recording of a live happening--is not what we get at all. Instead, as spectators, we lose ourselves in the lives being portrayed. Just as we would in any movie, and by extension, just as we would in any good theatrical production.

And this Vanya is indeed good. Wallace Shawn plays sad, broken Vanya, while Julianne Moore is Yelena, the woman he loves, and Brooke Smith is Sonya, the niece he adores. The narrative takes place during the visit of Sonya's father (George Gaynes), an out-of-touch professor who benefits from the work Vanya and Sonya do on the estate, which was left to Sonya by her late mother. Yelena is his second wife, and in addition to Vanya, she has attracted the attention of the local doctor (Larry Pine), despite Sonya's own interest in the man. Their existences become entangled, even as they become mired down in the old scholar's selfish demands and reckless plans. 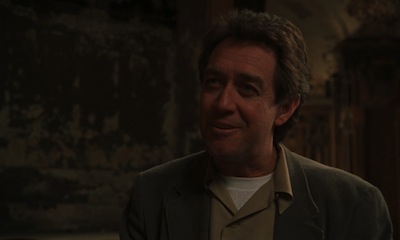 I have never read the original Chekhov, nor have I seen Uncle Vanya on the stage, but I had previously seen two BBC productions made for television, including one just a couple of years before Vanya on 42nd Street. They were a part of The Anton Chekhov Collection, a boxed set I reviewed for DVD Talk. Here is what I had to say about those programs, and the play itself:

Uncle Vanya is one of Chekhov's most famous plays and thus one that is produced the most often out of his library. In this set, we get two full productions on a double-sided disc, a 1970 film on Side A and a 1991 version on Side B. The play itself is an update of The Wood Demon, and that early effort has matured with Chekhov's skills. This remake is more sophisticated, with Chekhov trimming out a few characters and dropping some of the more strident, overwrought politics. The men in the play now feel the weariness of age, and as such, they no longer can subscribe to unbendable beliefs. They have felt the sting of failure, and they are aware of their own history. Alcohol also plays a more important role in their misery, much as it does in Platonov.


The Vanya character now takes the place of Uncle George, and he is a middle-aged man with nothing to call his own, no mark of distinction, resentful of his dead sister's husband, in love with the old man's new wife. Vanya in the 1970 version is played with inebriated bitterness by Freddie Jones. It's a stagey performance, with the actor bellowing and gesticulating wildly at times, and at others dropping to an overtly poetic whisper. It's hard to tell if he's intentionally pretentious, playing Vanya as a sort of soulless poser. Jones certainly is no competition for Anthony Hopkins, who plays his friend, the doctor Astrov, the new version of the Wood Demon. He's still an environmentalist, as well as a  vegetarian, but he is now a drunk and far more aware of his own outsider status and not as convinced that he can change the minds of others. His cynicism has made him a realist. Hopkins shows greater restraint than Jones, his sadness more soulful, wearing it like a heavy shirt. There is a dichotomy created between the two, a gulf of real feeling that Jones ends up traversing due to his character's more ignominious end, his drama queen status made all the more tragic by his inability to do anything to stop his own suffering.


The 1991 staging (for a series called "Performance"), interestingly enough, brings back Ian Holm as Astrov. The more mature actor taking on the more mature version of the role he played on DVD 2. The whole cast is slightly more "all-star," with Rebecca Pidgeon (known from countless David Mamet roles) playing the niece Sonya and Mary Elizabeth Mastrontonio (The Abyss) as her stepmother, Yelena. David Warner, perhaps best known as Billy Zane's ruthless right-hand man in Titanic, takes on Vanya.


The shooting style for this much later production is essentially the same as on the others, though the picture quality is noticeably better. The biggest difference is that the histrionics have been toned down in this Vanya and the performances grounded in a more weary reality. Holm and Hopkins take similar approaches, though Holm plays the doctor as far less arrogant. Warner's Vanya is a vast improvement, much less soppy, more aware of his bitterness and all that he feels he has lost. He has as much anger as he does self-pity.

The latter production is much more in keeping with the tone of Malle and Gregory's version, though the sparseness of their set piece also lends an even greater sparseness to the acting. Wallace Shawn is remarkably reserved as Vanya, saving all his energy for one powerful outburst when it becomes clear that his world is close to tumbling down. Larry Pine also advances the doctor to a point where he is, essentially, at the end of his rope. For all the talk of Vanya's more drastic impulses, the doctor is the one who seems to really be taking his last shot at happiness and meaning. Vanya, in the end, will carry on; the doctor leaves to we know not where.

I was also quite impressed with the performances of the female leads. Brooke Smith is heartbreaking as the self-aware "plain" girl who can't inspire the men in her life to notice her as more than a reliable worker. For the role of Yelena, Julianne Moore shows the new wife as mysterious, not entirely remarkable, but alluring--embodying all that the doctor says about her in his final, bold attempt to steal her away. She's asked for none of this, and wishes no ill will on her stepdaughter. The weariness of the life forced upon her is palpable. 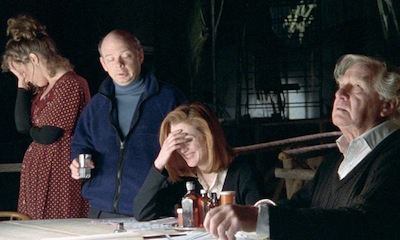 Vanya on 42nd Street comes to a quiet rest. There is no curtain, and no curtain call. Instead, the credits come on and the actors return to frame, as does André Gregory. Really, Louis Malle should have joined them. He is as much a part of this grand experiment as anyone--but then, that could be the one fundamental difference with cinema. Discounting our current information/hype-driven culture, the ones behind the camera never really take a bow. The lights merely come on, and we go home, far more disconnected than we realized, far less in touch than we would be if this were all occurring live.

It's also fitting that Vanya on 42nd Street was Louis Malle's final film. Though there is much left to be resolved for its cast of characters, the lack of resolution is its one finality. This is how life concludes: midway through whatever personal toil we have accepted as our lot (or, as it were, had foisted upon us). Whether it was intended to be his last film or not (he died a year later), it's the perfect punctuation for a mercurial career spent changing the boundaries of cinema, of experimenting with and expanding on the language of filmic storytelling. Uncle Vanya is a text full of meaning, and Vanya on 42nd Street is a potent and meaningful rendering of the same. 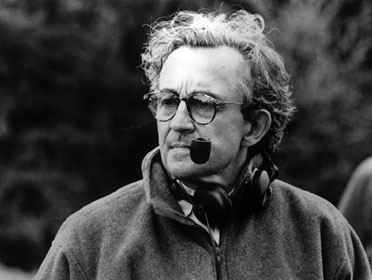