SIDELINE: ONE WRITER, MISSING IN ACTION

I'm embarrassed to be writing one of these posts, but I owe my regular readers an apology. I hate when bloggers go off the rails and don't meet their commitments, but here I am, three weeks behind on my reviews. A variety of the usual factors have contributed to me not getting any reviews done this month; it's all fairly predictable, I won't go into it too heavily. Needless to say, I am keeping track, and I will make up for the missed weeks as soon as I can.

The one thing I will point you to that has been a heavy-duty time suck is that I decided to serialize a novel online. It's called Bobby Pins and Mary Janes. The book is written, but I am copyediting and preparing posts for the launch on April 27. This, naturally, is time-consuming, and I am trying to set it up so I am not updating every week just in time. I have the first couple of posts ready to go already, but lead time disappears fast!

I am going to cut and paste the press release for the book below. Please consider visiting the site -- bobbypinsandmaryjanes.com -- and bookmarking it. It's a new adventure that is both exciting and terrifying, but there's no stopping it now!

Regardless, thanks for your patience. I will be back!

Beginning on April 27, website bobbypinsandmaryjanes.com will go live with the opening pages of Jamie S. Rich’s fourth prose novel, Bobby Pins and Mary Janes. Described as “The Devil Wears Prada for the comic book industry,” this lengthy work of literary fiction chronicles a life within the world of indie comics, complete with moody editors, sensitive cartoonists, and more than a little four-color romance.

Bobby Pins and Mary Janes is a workplace drama, but also a novel of identity, exploring one character’s crises of conscience during her mid-20s. Parker Reid is a college graduate who always dreamed of literary grandeur, but she’s found herself working in a creative field she never anticipated.

“Parker’s work struggles reflect her personal struggles,” Rich explained. “She has been on her own for a couple of years, and she remains on her own. At the start of the book, she is having an affair with her employer’s top cartoonist, but by the end of it, she will have flirted with a married man, chased the safe option, and also had to contend with the unrequited love of her best friend from school. Is this the life she wants? Should she settle for a relationship the same way she settled on her job?”

The aforementioned fictional cartoonist is the creator of an original comics series called “Valerie Flames,” an ongoing series about a young girl whose adventures cross the mysteries of Nancy Drew with the escapades of Tintin. Character designs for Valerie Flames and her cohorts were drawn by Joëlle Jones, Rich’s frequent collaborator. Together they have produced the graphic novels 12 Reasons Why I Love Her and You Have Killed Me. Valerie’s adventures will be represented in the online version of the novel via sections of script. “The script interludes not only demonstrate what this invented comic book might be like,” Rich said, “but also establish a meaningful parallel with the main narrative. The technique is like Margaret Atwood’s The Blind Assassin mashed-up with Michael Chabon’s The Amazing Adventures of Kavalier and Clay.”

“The world of comic books is one I know well,” Rich commented. “I began as an editorial assistant at Dark Horse Comics when I was 21, and I spent six years as editor-in-chief at Oni Press. I’ve written my fair share of funnybooks, as well.”

Bobby Pins and Mary Janes follows on the heels of Rich’s previous prose works, including his popular first novel, Cut My Hair, and his most recent, Have You Seen the Horizon Lately? Yet, it’s his second book, The Everlasting, that the new novel has the most in common with thematically. “The Everlasting was the story of a 25-year-old boy who couldn’t make up his mind about what he wanted in a relationship. Bobby Pins and Mary Janes is like the response to that--like a retaliation record in a rap battle. It’s the flipside of the story from the girl’s point of view.”

When asked why he chose to serialize the book online, Rich’s answer was simple: “I finished writing this book a couple of years ago, but for a variety of reasons, it ended up on the back burner. In the time since, technology has changed and grown, and I wanted to take advantage of that. Plus, the serialization gives me specific goals for getting the material out there. Every Friday, another section of the novel has to arrive. When it is done, I may take it further, but for now, this is the platform.”

Each posting will be readable directly on the bobbypinsandmaryjanes.com tumblr, or downloadable as a pdf. “I want people to be able to load it into their chosen reader and take it with them.” In the run-up to the first post, Rich has been teasing visitors to the blog with images that inspired him while writing the story, including a random sketch by Joëlle Jones that became his visual marker for main character Parker Reid.

Press looking to cover Bobby Pins and Mary Janes can contact Rich at golightly[a]gmail.com. He is available for interviews and can also send the first postings for early review 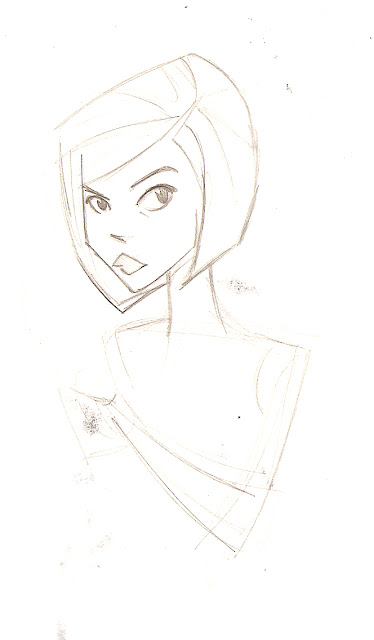