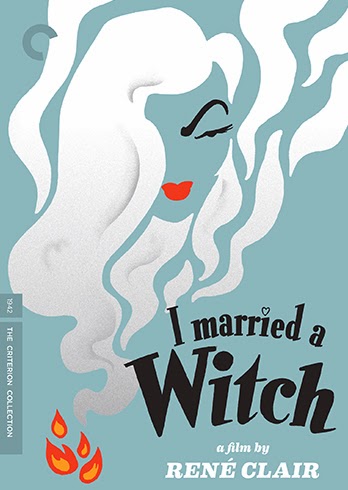 Like many cinephiles, I've been indulging in my fair share of spooky films for the Halloween season. We're only a couple of weeks in, and I could end up either overdosing or becoming immune to bumps in the night.

René Clair's 1942 comedy I Married a Witch is a nice antidote, fitting thematically with the horror holiday, but providing quite a few laughs to ease the tension. Veronica Lake stars as the movie's title witch, Jennifer. In the amusing prologue, we learn that Jennifer and her sorcerer father (Cecil Kellaway) date back more than 200 years, when Jennifer was burned at the stake for seducing a mama's-boy pilgrim. As revenge, the man's family has been cursed to always be unlucky in love. With each successive generation, things go wrong for the men of the Wooley clan, leading up to the 20th Century and Jonathan Wooley (Fredric March), a politician running for mayor and set to be married to a wealthy heiress (Susan Hayward).

Sensing it's time once again to throw a spanner in the works, Jennifer convinces her father to let her ditch her spectral form and take on a new human body that she can use to seduce Jonathan. The old warlock agrees, knowing that the only thing more torturous than marriage itself is to not be able to marry the woman you really want. They contrive for Wooley to save Jennifer, now a blonde of some va-va and vavoom, from a burning hotel. As planned, once their paths have crossed, she invades his life with designs on invading his heart. This flirtation causes Wooley much distress, since, if he's found with her on the eve of his nuptials, there will be no way to avoid a scandal. Hell, for the first portion of the movie, post-fire, Jennifer is naked except for a fur coat--her father forgot how to cast the spell to generate clothes--and so she's difficult not to notice. The ribald jokes that rise out of this scenario alone are worth the price of the disc. I Married a Witch isn't exactly a sex comedy, but for 1942, it's certainly not afraid to be sexy. 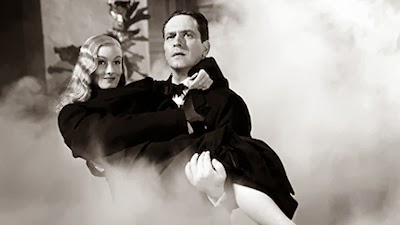 Clair does well with the snappy, screwball pace of I Married a Witch. The style of comedy ends up closely resembling that of its producer, Preston Sturges, even if he did remove his name from the picture following creative differences with his director. The script relies on smart dialogue and an endless string of complications--including a few that you won't see coming. March is good as the man being buried in romance and innuendo, and he's ably backed up by Algonquin Round Table-alum Robert Benchley, a master wit in his own right, playing Wooley's closest advisor.

Both are eclipsed scene by scene by Veronica Lake, who I don't recall ever being funnier. The blonde beauty may best be known for playing the female lead in Alan Ladd noir vehicles, but I Married a Witch makes me want to explore more of her light comedies. Lake, of course, proved she could trade quips and barbs in Sullivan's Travels [review], but Jennifer provides a more dynamic role. The actress gets to be more active and drive the plot, much like Barbara Stanwyck in The Lady Eve [review]. She's charming and tenacious and possessed of an excellent comic timing. She also handles the switch-up well, showing an ability to adapt that is essential to this kind of comedy. To put it simply, you can believe the bad girl fell in love. 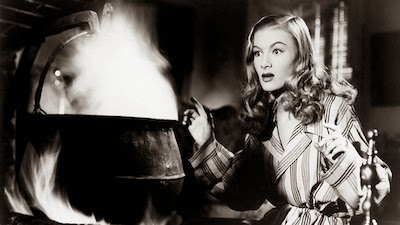 Apparently I Married a Witch was a major inspiration for Bewitched, particularly for the domestic element. Indeed, Bewitched could practically be the sequel. Jennifer is not supposed to alert mortals to her existence, and so when she confesses to Wooley, dear ol' dad has to take punitive actions. The magic stuff is clever and actually quite funny, including gags involving a witch's broom and Jennifer's old man, while still a spirit, hiding out in a liquor bottle, becoming imbibed with spirits of another kind.

The Blu-Ray restoration of I Married a Witch looks fantastic, with an excellent level of detail and nice balance between light and shadow. It's a great way to see the movie, and I imagine even moreso for fans of the film, who I assume are used to seeing it more lo-fi, in a different format, via older prints. This was my first time, and I was impressed. I Married a Witch is fun, buoyant entertainment and will likely become my new Halloween tradition. 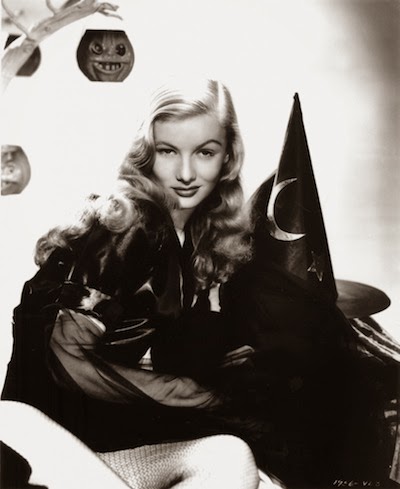 WHAT HAVE I BEEN UP TO INSTEAD OF BLOGGING?

Quite a lot, as it turns out.

Trust me, I am horribly ashamed of not keeping my weekly schedule for the last 16 or so months. I've done my best as a deadline-conscious compulsive, but I've fallen woefully short.

Here is my confession...

The above is actually a teaser for a new online interview program launching today. It's called From the Gutters, and it's basically me sitting down with other comic book creators and talking shop.

Here is another teaser showing our nine first-season guests:

The first episode features Matt Wagner, and it's live as of...well, right now!

In addition to all that, I've been busy bringing my own comics together (Amazon links at bottom).

This week, we released It Girl and the Atomics, Round Two: The World is Flat.

On November 27, my collaboration with my sartorial little sis', Natalie Nourigat, a little romance tale called A Boy and a Girl.

In case you missed it, you can get a lot of info at my recently redesigned website, including a store with signed books: confessions123.com

There's plenty more to come. In the midst of all that, I have a Monkeybrain comic debuting via Comixology, and a six-part serial called "Integer City," drawn by Brent Schoonover, staring in Dark Horse Presents #30. 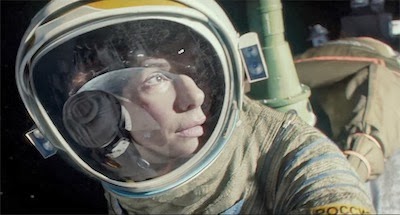 * Adore. You heard of wife-swapping? How about son-swapping? Naomi Watts and Robin Wright are best friends who start having sex with each other's sons. It's all very literary.

* Gravity. See this in the biggest, loudest theater you can. Then again, if you need me to tell you that, you must be living somewhere no one can hear you scream.

* Inequality for All, a documentary about the widening gulf between the 1% and the working poor, as well as the disappearing middle class. Luckily, your host for this sobering journey is the affable Robert Reich.

* Short Term 12, one of the year's best. Brie Larson stars in this potent drama about counselors for troubled teens who find some of the kids' problems hit a little too close to home. 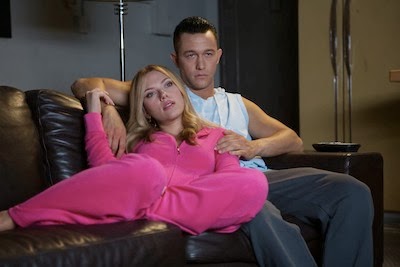 We're shaking things up a bit. Online, the column I write will now be broken up and the individual movies listed on their own; the Friday paper will still print them all together. These first few, naturally, are the old way.

* September 6: go on pilgrimage in the documentary Walking the Camino, see Richard Elfman introduce a colorized Forbidden Zone, and watch the Everything is Terrible! website come alive.

* Cutie and the Boxer, a documentary about two Japanese artists who have been married and living in New York for four decades.

* Gideon's Army, a personal look at public defenders and the Herculean nature of their professions.

* Salma, the true story of an Indian poet who transformed confinement into art.

* The Trials of Mohammad Ali, a documentary looking at what happened to the champ when he stopped being Cassius Clay and started to stand up for what he believed.

* A Tribute to Les Blank: Three nights of Southern culture, music, and food.

* Plus, two creative, off-the-beaten path screenings: From Nothing, Something asks a variety of artistic types why they do what they do, and Vanessa Renwick shows us what it is she does in the Wild Beasties program. 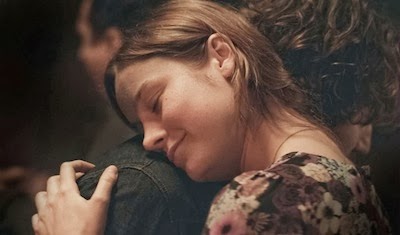 * Between Us, a smart indie drama with Julia Stiles and Taye Diggs.