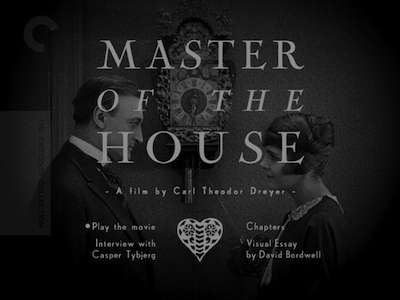 Well, I'm guessing Carl Theodor Dreyer got some extra special TLC from his mother the first time he visited home after making this one.

The Danish director's 1925 silent film Master of the House is a charming household drama, a paean to mothers and wives everywhere. It's sentimental and melodramatic and unashamedly so, and while not as deep as later efforts like The Passion of Joan of Arc or Gertrud, it does fit into the director's filmography of profiles of interesting women. 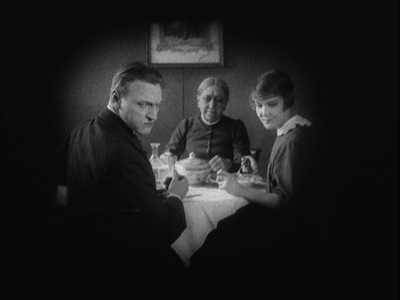 Based on a play by Svend Rindom, and adapted in conjunction with the playwright, Master of the House is the story of a watchmaker (Johannes Meyer) and his family after they have fallen on hard times. Viktor has had some business troubles, and he takes his frustrations out on his long-suffering wife (Astrid Holm) and their two kids. Ida is a saint, rising early to make breakfast, and as we find out later, staying up late to sew for other people in order to make sure her husband is fed in the style to which he is accustomed. Her reward for these efforts is scorn and derision. The text makes no bones about it: Viktor is a tyrant. Ida and the kids can do nothing right, and they walk on eggshells whenever he is around.

The story turns when Viktor's old nanny, Mads (Mathilde Nielsen), sees what a beast he has become. She colludes with Ida's mother (Clara Schonfeld) to get Ida to leave Viktor, feigning illness. While she is away “recuperating,” Mads will run the household, using her sway over her one-time ward to give Viktor a taste of his own medicine and put him in his place. This scheme will work, of course, and the ladies pulled it none too soon: once Ida is away from Viktor, she has a breakdown for real. As it turns out, the only thing holding her together was how clenched she was around her husband. The time away will allow her some legitimate rest. 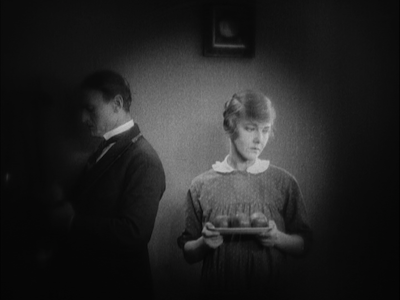 Master of the House balances its amusing plot with the darker implications of the abusive family dynamic. It's funny watching Viktor forced to do housework, as well as suffering other “manly” humiliations, culminating in Ida tricking him into thinking his wife has fallen for another. Nielsen is marvelous as the cantankerous older woman, even managing to pull off a there's-something-on-your-tie gag, flicking Viktor in the nose when he looks to see. (How long has that joke been around? Did cavemen pull it?) Dreyer is careful to underline that Viktor does really love Ida, and Ida adores him, giving a reason for why the reconciliation is necessary. Likewise, the love his daughter (Karin Nellemose) has for her daddy reinforces that there was a time when things were better in the Frandsen home. Viktor is, above all, a villain for whom we can have compassion. Master of the House embraces forgiveness as an essential component of redemption. 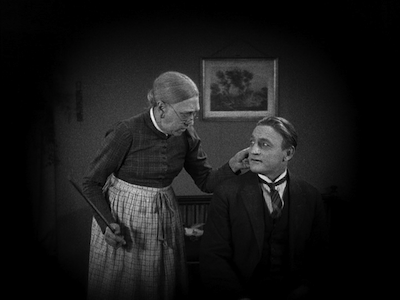 Dreyer's storytelling technique is pretty simple here. His emphasis is on character, and he uses tight close-ups to allow his actors to communicate their emotional processes, making up for the lack of dialogue. Multi-character scenes are deftly cut together, moving from person to person, making sure each has their space. Dreyer served as editor and art director in addition to writer and director, and his control of the mis-en-scene is evident throughout. He carefully choreographs each performance, finding nuance in the non-verbal expression that far exceeds the cartoony cliché that many imagine when they think of silent movies.

The new Blu-ray/DVD release reconstructs the original musical score written by Gillian B. Anderson, and here performed on piano by Sara Davis Buechner. As with the best silent film scores, the music works subtly, often fading into the background even while maintaining a consistent presence. Buechner's playing never overshadows the performances by the actors, but instead elevates the appropriate moments. The music serves as support, but it's not a crutch. Dreyer doesn't need it to sell the emotional peaks and valleys. The work is being done up there on the screen. 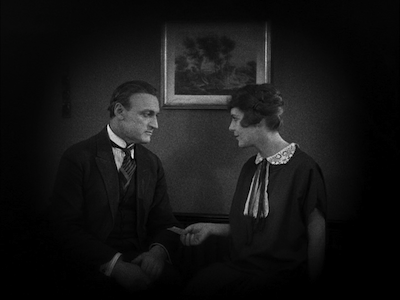 The image restoration on Master of the House is also excellent. The print appears to be largely intact, with only a couple of jumps where it looks like maybe some frames are missing. The picture quality is clear, with very little surface damage evident. The intertitles are presented here in English, but in a style that appears to be consistent with the aesthetic of the time. Mention should also be made of Beatrice Coron's cover illustration for the Criterion release, which effectively captures the old-fashioned, storybook quality of Dreyer's film.

All in all, while not as essential to the canon as previous Criterion titles from the director, Master of the House makes a nice addition to one's Dreyer library. It's a likable domestic drama that wears its message proudly on its sleeve--the opening and closing title cards lay it all out for you--yet somehow manages to avoid being preachy within the narrative itself. 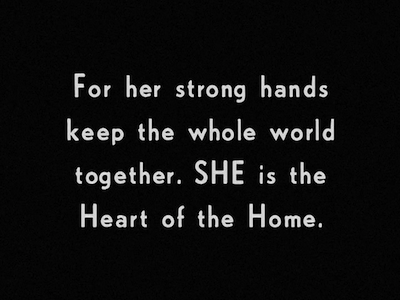 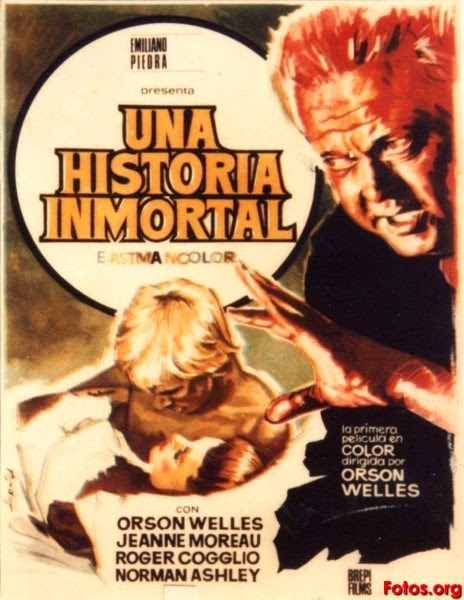 Never released on home video in North America, Orson Welles' 1968 adaptation of Isak Dinesen's The Immortal Story has long been a missing piece in my Welles' viewing history. Glimpsed only briefly as clips in documentaries about the filmmaker, it remained elusive until Criterion added it to their Hulu Channel [edit: and now BD/DVD].

Clocking in at barely an hour, Welles made the film for French television, and it was intended to be part of a longer anthology of Dinesen adaptations. Like so many other Welles projects, the planned second half fell apart before cameras rolled. What remains, then, is a short curiosity in the great director's canon, far from his best work and possibly the most dispassionate movie he ever directed. 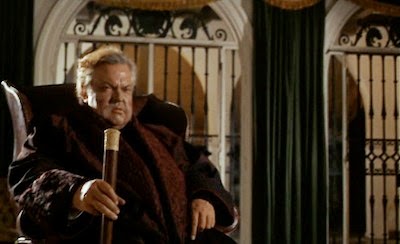 Welles himself stars as Mr. Clay, a rich businessman living in Macao. Old and isolated, he spends his nights compelling his assistant (Roger Coggio) to read to him from his account books. Bored of all the numbers, he begs his servant to tell him a story. In doing so, they discover they both have heard the same urban legend about a millionaire who paid a sailor to impregnate his young wife so that he'd have an heir worthy of inheriting his money. Only, Mr. Clay has always believed the tale to be true. Angry to have this reality removed from him, he vows to make the story actually happen. He will choose a sailor, and the assistant, Levinsky, will find the woman to play the part of his wife.

Levinsky's choice is Virginie Ducrot (Jeanne Moreau), the daughter of a business partner that Clay drove to suicide. Virginie has lived a modest life since, hating the man who now occupies the house where she grew up. Levinsky is surreptitiously offering Virginie a chance at revenge. By having a middle-aged woman pretend to be the wife, he will undermine Clay's "truth." 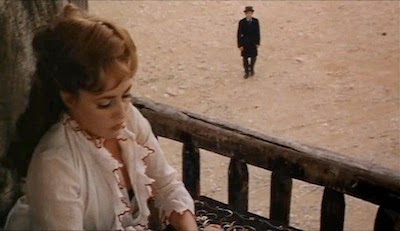 That is the long and short of The Immortal Story. The film's narrative consists almost entirely of one-on-one conversations between the various characters: Clay and Levinsky, Levinsky and Virginie, Clay and the vagabond sailor (Norman Eshley). Outside of a brief intro where a local merchant (Fernando Rey) gossips about Clay's role in destroying Virginie's family, The Immortal Story is essentially a quartet, with the script working over each character's motivation and their larger interpretation of events. It's all a bit stuffy, and not helped much by the lackluster filmmaking. The camera is mostly stationary, with very simple framing. Outside of a motif where the audience is placed on the outside of an event, peering through gates and curtains and the like, The Immortal Story shows a surprising lack of artistry. Welles was apparently unhappy about having to shoot the film in color, and you can feel his lack of enthusiasm in every scene.

He doesn't fare much better as an actor. He spends most of The Immortal Story sitting down, caked in old man makeup, croaking out his lines like a lethargic bullfrog. Coggio plays off of Welles' exaggeration by going in the opposite direction. He portrays Levinsky with a pronounced reserve.

That means it's up to Jeanne Moreau to carry this thing. It helps that her character has the most depth, as well. The actress is smart and compelling, entwining Virginie's insecurities about age with the bitterness she has for Clay. The only thing the old man manages to create in his endeavor is tenderness between the older woman and the virgin sailor. Moreau's whole being changes in their sequence together, as Virginie has found herself experiencing a real human connection, something she has lacked for a long time. Though, not even Moreau can do much with the embarrassing sex scene, screaming out "It's an earthquake! Did you feel that?" upon climax. Thankfully, this scene, shot in extreme close-ups, is mercifully brief.

I suppose I could say the same about The Immortal Story as a whole, but that would be a bit extreme. It's not terrible, it just comes across as half-baked, providing a momentary distraction for Orson Welles and proving to do the same for his fans. 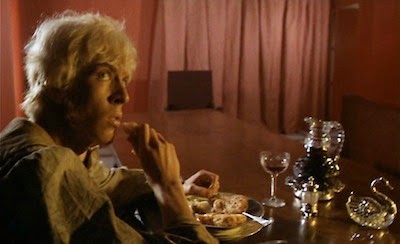