This review was originally written in 2008 for DVDTalk.com. 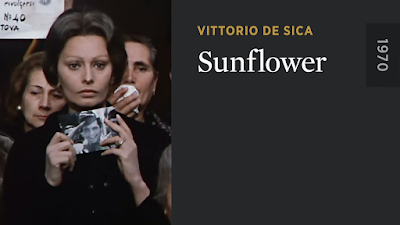 Sophia Loren made three films with Italian Neorealist pioneer Vittorio De Sica and a whopping thirteen with co-star Marcello Mastroianni. 1970's Sunflower, a romantic drama set in World War II, is the kind of sweeping love story that could be pretentious and overdone in most hands, but De Sica brings his usual humanity to the project and, as a result, brings out two very down-to-earth performances from his stars, both of whom can play it much bigger than allowed.

Loren plays Giovanna, a simple Neapolitan girl who engages in a little fun with a soldier, Antonio (Mastroianni), on the eve of his going to war. On a lark, the two get married so he can score twelve days leave for his honeymoon, and they end up falling in love with each other. The actors appear to be having fun together, and their very real chemistry makes their passion and affection absolutely convincing. The couple can only hold off the army for so long, however, and Antonio is shipped off to the Russian front, where he goes missing, failing to return with the rest of the troops when the war ends.

Sunflower is told in a flip-flop fashion, starting with Giovanna's hunt for her lost husband and jumping back in time to show us how they came together, fell in love, and how Antonio was lost. The battle sequences using archival footage are elegantly done, De Sica superimposing the red flag of war over the fighting. As a director, he is just as facile with the bigger moments as he is with the smaller ones, and this goes a long way to making Sunflower (Italan title: I Girasoli) another winner in the set. As a more mature actress, Sophia Loren is more comfortable on screen here than in many earlier films, and she seems absolutely confident with her age, once more proving her appeal comes from within at least as much as it does from her appearance. 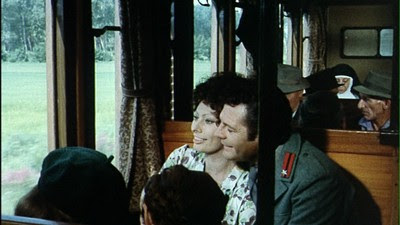