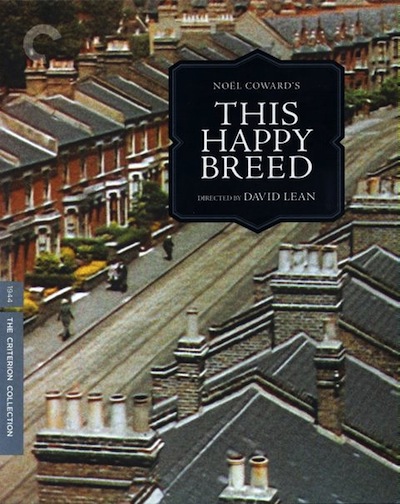 There is a breezy simplicity to the 1944 Lean/Coward collaboration This Happy Breed that almost completely obscures the ambition of the piece. Based on Coward's original play, David Lean's team--including Ronald Neame on script and camera, as per usual--remove any staginess from the production and create a seamless history of one family's ups and downs from just after the end of World War I to the sketchy days just prior to World War II.

Robert Newton and Lean regular Celia Johnson star as Frank and Ethel Gibbons. Following Frank's discharge from the service, the Gibbons family--two daughters, a son, Ethel's mother, and Frank's sister--move into a home on High Street in London. Next door is one of Frank's army buddies, Bob Mitchell (Stanley Holloway, My Fair Lady [review]), and so this new homecoming is also like a reunion. Bob has one son, Billy (In Which We Serve's John Mills [review]), who wants to be a sailor, and he will eventually fall for Queenie Gibbons (Kay Walsh). The length of their relationship is one of This Happy Breed's many subplots. 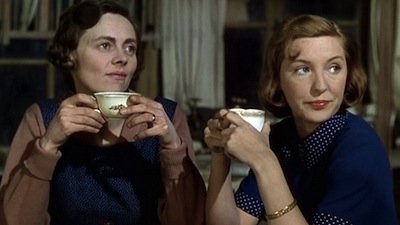 The script moves swiftly, leapfrogging over the years, showing the changing times through the news, popular entertainment, and the advancement of technology, particularly the radio. The film examines just about everything: the influence of Communism and workers strife, increasing freedom for women, crackpot spirituality, and the encroaching winds of war. Parent and child disagree and then find common ground. Hotheaded youth succumbs to everyday life. Babies are born, family members die, and through it all, Frank and Ethel persevere, growing older and more gray. This Happy Breed is punctuated with two drinking binges by Frank and Bob--one midway through the picture on the night that Queenie disappears and the other near the end, when Neville Chamberlain woos England into believing that war is being averted. The men represent a generation that has seen much trouble in their time, and who are cautious about how easy it will be to avoid such trouble again.
This Happy Breed is phenomenally compact, and yet it doesn't sacrifice depth of story or character. It would have been rather easy to rely on cliché and stereotype, and in some ways, that happens--the other daughter, Vi (Eileen Erskine), falls for a rabblerousing Bolshevik (Guy Verney) who ultimately settles into the expected role of wage earner and social conservative--but the brilliance of Noël Coward's dialogue is how he uses average conversation to reveal so much about the people engaged in the talk. These are people really saying something, not just filling the time between opening and closing credits. One of the best scenes is when Frank gives his son, Reg (John Blythe), advice on the day of his wedding. Robert Newton nails the speech, covering his nerves with a stern, fatherly tone, and Coward's writing expertly dances around sensitive issues without resorting to trite euphemism. Frank says plenty about the birds and the bees both without ever mentioning either by name.

This Happy Breed doesn't build to a big crescendo. Rather, the story evolves to a natural place, and life's changes dictate how the Gibbons family will exit their cinematic excursion. In many ways, it reminds me of William Wyler's The Best Years of Our Lives

, even if it is on a completely different continent and on the opposite side of WWII. The drama is never overwrought, the sentimentality never mawkish, and the decisions never easy, holding up a compelling mirror to an audience who likely had no difficulty recognizing themselves in the faces in the glass. 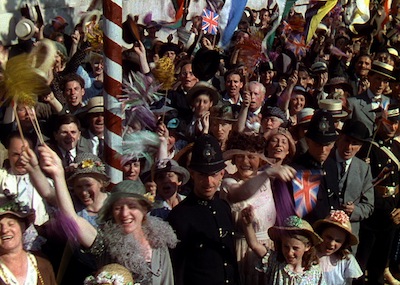