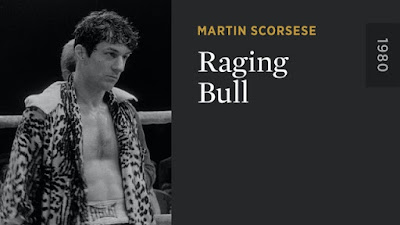 Last week, after seeing David O. Russell's marvelous new boxing movie The Fighter, I commented to a friend that it doesn't make any sense that I haven't gotten into watching boxing proper, because every time I see a boxing movie, I think I should. It's my favorite sports genre. In fact, I don't really consider boxing movies to be sports movies. They are separate from the rest, their own thing. I would never automatically want to go see a baseball movie, or one about football or basketball or hockey, but if it's about a boxer, okay, sign me up.

Of course, one of the greats of the genre is Raging Bull, Martin Scorsese and Robert De Niro's 1980 biography of Jake La Motta. You could easily claim that it's the heavyweight champion of all boxing movies, and I don't think I'd argue with you. It's a pugilistic masterpiece, a dangerously choreographed piece of work that explodes in great dervishes of fury and falls back with the heaviest of heartbreaks. 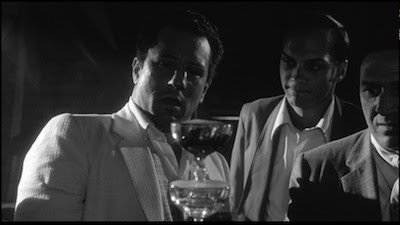 Jake La Motta was a middleweight fighter whose heyday was the 1940s. An Italian boy raised in the Bronx, La Motta was a force of nature. Throughout Raging Bull, he is regularly referred to as an animal, even if he's only called by his nickname once. For Jake, every moment of his life is a fight, whether he's dancing on the canvas or drinking in a nightclub or eating his dinner at home. Every person in his life is an opponent, and he is always working out the angles to make sure that no one gets the better of him. Every conversation is an opportunity for one of his foes to underestimate him, and every riposte a potential knockout punch.

Raging Bull follows Jake over the decade as he swings his way toward an eventual title fight, the distant achievement that eludes him for the bulk of his career--most other boxers are scared to brawl with him--and once he's got it, it's only downhill after. The bouts are shown briefly, lingering longest on the more important matches, including his longtime rivalry with Sugar Ray Robinson (Johnny Barnes). Scorsese famously kept his camera inside the ring, keeping us close in the clinches, letting us feel each pummeling. This gives Raging Bull its lasting immediacy, while the decision to shoot in black-and-white ensures its timelessness. History is alive in the moment, yet there is the usual classic Hollywood vibe that only Scorsese can do without making it look like he's playing dress-up.

For as memorable as these skirmishes are, however, they are only a small part of Raging Bull. The movie is adapted from Jake La Motta's autobiography, with a script by Paul Schrader (Mishima [review]) and Mardik Martin (Mean Streets), and it shows the rise and fall, warts and all. The unsavory elements include a thrown fight and a later vice charge. They also show Jake's violent streak, and his abuse of those around him. The two most important relationships in Jake's life are his brother Joey (Joe Pesci) and his second wife Vickie (Cathy Moriarty). He meets Vickie when she is 15 and while he is still married. It's hard to say what she sees in him, but he clearly sees the beautiful young blonde as some golden prize. He's a jealous creature, though, and one used to getting his way. He browbeats both Vickie and Joey, both of whom only want the best for him, and when words aren't enough, he raises a hand to them, as well. 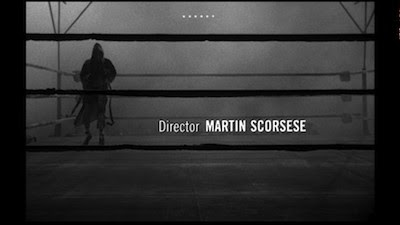 In 2009, James Toback's documentary Tyson earned a lot of praise for the way it probed the personality of Mike Tyson and the culture of violence that created him. Toback uses the fighter's own words to try to poke at the contradictions in his character. Is he the beast most believe him to be? Scorsese explores similar questions about La Motta, though Raging Bull is more effective because, unlike Toback, Scorsese doesn't seem desperate to exonerate his subject. He's just as fascinated by what the warrior lifestyle is doing to the man who takes the punches, but he also sees the tragedy such a figure inflicts on the world around him. Sure, the business and lifestyle of boxing might force a man into dark corners, but such a man is trained to fight back. La Motta turns the hurt around tenfold.

I could go on and on about the virtues of Raging Bull. Thelma Schoonmaker's invisible mis-en-scene deserves praise, as does Michael Evje and Gary S. Gerlich's tremendous sound design. They use distorted wildlife noises to soundtrack the fight scenes, and they pull the audio in and out, mimicking the elasticity of time Jake experiences in the ring. Michael Chapman's artful photography pulls similar moves. Dialing down the playback speed to a molasses crawl effects the reality of a complex action like a good punch combo. They say an expert in any field experiences the moment when they perform their most complicated tasks differently, something similar to how, when we're in a car crash, the scant few seconds leading to impact seem to go on forever. At the same time, Scorsese and Chapman orchestrate tremendous zooms and pans, capturing the speed and force of a La Motta jab. 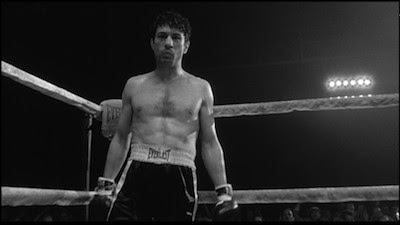 Likewise, not enough can be said about the unbelievable cast. Pesci is a fireball, and he and De Niro have an unmatched rapport onscreen. As a duo, they have never been as fresh as they are in Raging Bull. You can believe they are brothers who have lived together all their lives. The rhythm of their back-and-forth lacks any self-consciousness, it just flows naturally. Cathy Moriarty is also remarkable as Vickie. It's easy to miss the range she shows here if you don't keep in mind that the actress, who was approaching her 20s, starts off the movie playing 15, several years younger than she actually was, and ends playing a few years older than her real age. The change isn't sweeping--not as obvious as, say, De Niro's weight gain as Jake--but keep your eye on her, see how her body language and presence changes from her first scenes with Jake, when she's got a slight touch of the awkward teen in the way she quietly slumps, and then compare it to the strong woman who eventually stands up to the bruiser. 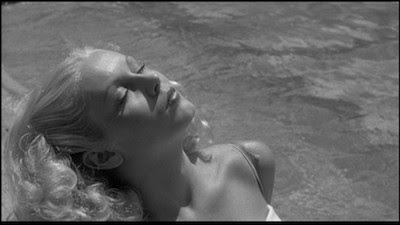 The movie still belongs to De Niro, of course. He's in nearly every scene, and though it's one of his more mimicked roles, it's one of his least mannered. The De Niro tics disappear under La Motta's agility and, eventually, his girth. Though the actor is less recognizable under the prosthetic nose and curly hair, it's not really about the props, it's about how he carries himself. We've seen him rage in other movies, we've heard him pull out the New York accent, but Jake is a whole other person. He's not Travis Bickle or Jimmy Conway, he's not even really De Niro. It's easy to take swipes at the actor now for a perceived lessening of quality control in regards to choices he makes, but you know what, screw you. He made Raging Bull; your snark pales by any comparison.

Raging Bull regularly tops lists of the best films of the 1980s and rides high on any more expansive round-ups of cinema's best. As with most of the other usual suspects, be it Citizen Kane or It's a Wonderful Life [review] or Casablanca, the reverence exists for a reason. Raging Bull really is that good. Time passed and repeat viewings only stand to prove the level of craft that Martin Scorsese, Robert De Niro, et al., were operating at. Good storytelling and solid application of technique is the impenetrable armor of classic cinema: you can never pierce it or tear it down. 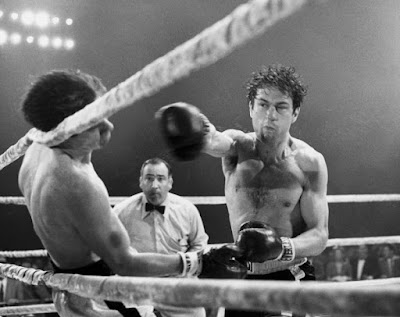