I just found this older review of The Crimson Kimono posted to my Confessions of a Pop Fan blog in 2005. Follow this link and you'll also find a review of Samuel Fuller's Underworld U.S.A., a quick take on The Naked Kiss, and a bunch of broken images. (You can't have it all!) 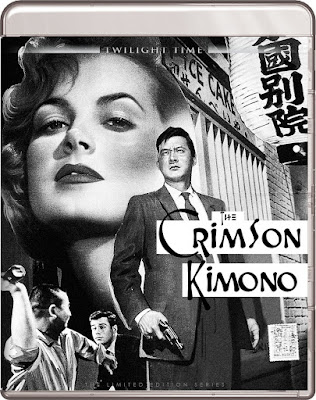 The Crimson Kimono (1959), a cop drama set in Los Angeles. Fuller opens on a fictional Main Street, zooming through its seedy blocks to a strip club where Sugar Torch is just getting off the stage. She heads back to her dressing room, but someone is inside with a gun. She tries to run, but Sugar is shot down in the middle of the street. Enter our detectives, Charlie and Joe, played by Glen Corbett and James Shigeta. Charlie is your average white meathead, and Joe is a Japanese American with a touch more sensitivity. They’ve been friends since they were in the same unit in the Korean War. Fuller makes several visual side notes about the war, including showing memorials for other Asians who served in the armed forces and a sly revelation of an Army propaganda sign on the streets of Little Tokyo (which pops up again in the background of Underworld, U.S.A.). In fact, Fuller shows a surprising sensitivity for race in this film, using real locations, Asian actors, and shining a spotlight on the friendship between the detectives and the questions of racism and interracial romance that come between them. In fact, he is so interested in this side trip, he pretty much lets the murder case drop for most of the final reel of the film. You see, the key witness is a young painter named Chris (Victoria Shaw), and Charlie falls for her pretty hard. Joe does, too, and the guy can’t help but lure her away just by being much more well-versed in the sorts of things an artist would be interested in. He doesn’t want to act on it, but the two can’t resist, and when the pair finally reveals their feelings to Charlie, Joe misinterprets the various reactions that follow as racism. Everything becomes wrapped up in Joe figuring out he’s wrong.

The murder does get solved. The plot is tied around the participants in creating a geisha-themed stage act for Sugar Torch, which is where the titular crimson kimono comes from. The hunt for the killer culminates in a chase through a parade in Little Tokyo, and its resolution directly relates to Joe’s getting his head straight. Fuller is always fun. He’s not interested in subtlety. Even when Joe talks about the way his artist father delicately painted cobwebs, Fuller hits you over the head with the poetry. But that’s the point of his movies. The audience straps itself in and rides with him. Unfortunately, the print the NW Film Center acquired was of inconsistent quality, and it was often badly spliced--not a good thing when you consider that Fuller’s editing here was rivaling Seijun Suzuki for jump cutting. Still, nothing bad enough to really mar the experience. 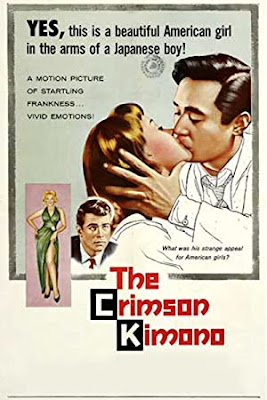