“Of all the seven deadly sins, jealousy is the most deadly.” 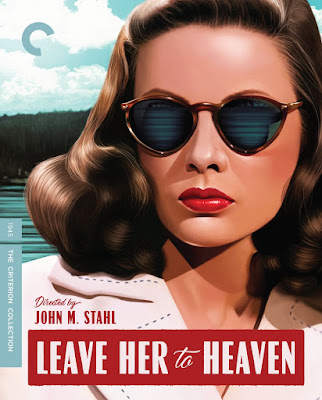 It’s ironic, I suppose, that I became positively obsessed with Gene Tierney the first time I saw Leave Her To Heaven. I tracked down every film I could at the time, which meant following a lot of the Fox reissue series from the DVD era. It was a good mini label, often using A&E and AMC programming as extras, and they numbered the spines. Someone was paying attention to the Criterion obsessives.

Why I say it’s ironic is because Tierney’s character Ellen is obsession personified. Driven by jealousy, she fixates on her husband, determined to share him with no one else. Not his brother, nor her sister, nor eventually even their own child. Ellen is so alluring and so attentive, he’s blind to it far longer than he should be, ignoring all warnings. And, of course, as a film fan, I was glued to her every move. 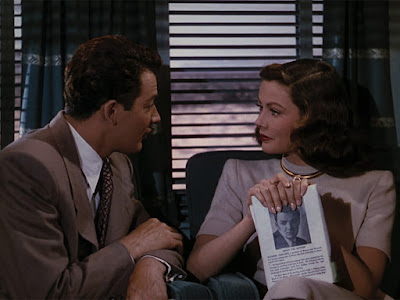 Leave Her To Heaven is considered a hybrid of film noir and the “women’s picture,” as perhaps best personified by Douglas Sirk. Like many classic movies, I sought out Leave Her To Heaven  based on a Martin Scorsese recommendation. My purism rejected the notion of a Technicolor noir, but resistance was futile. I ultimately had to see it and sample this cinematic Reese’s peanut butter cup. You got my noir in your melodrama!

When it comes down to it, though, Leave Her To Heaven has few noir trappings. It’s set in a rural domain, it’s mostly in sunlight, and it’s far more romantic than fatalist. It’s actually more of an upending of the “bad husband gaslighting his wife” movies, like Fritz Lang’s Secret Beyond the Door [review], Max Ophuls’ Caught [review], or Sirk’s own Sleep, My Love [review]. Director John M. Stahl--working from a screenplay by Jo Swerling, adapting a novel by Ben Ames--instead has the wife slowly undermining her husband’s faith in himself, ironically chipping away at his love rather than securing her position as the only thing in his life. (Fun aside: Stahl directed versions of both Imitation of Life and Magnificent Obsession before Sirk’s more famous remakes [review of both versions of Magnificent Obsession].) 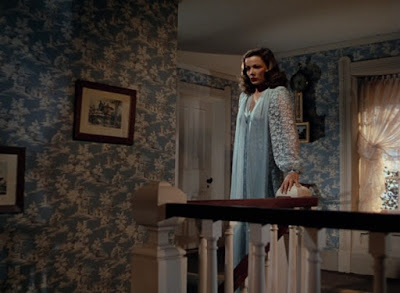 Cornel Wilde plays the husband, novelist Richard Harland. Criterion viewers will know him for The Naked Prey [review], his triumphant directorial/starring vehicle, but he doesn’t fare as well here. He’s a bit of a weak link, failing to be charming or seductive. Honesty, his rap is so bad, down to quoting his own book, I have cause to wonder if Ellen picks Richard because he’s a bit dim and thus easily manipulated. Likewise, most of the supporting cast is fairly mediocre, giving more room for Tierney to control the frame. Her only competition is from her Dragonwyck co-star Vincent Price, who here plays her jilted lover, but who really gets to shine as the district attorney in the courtroom scenes that occupy Leave Her to Heaven’s final act. Price manages to distinguish himself because his character is the only one as driven as Ellen. His passion in front of a jury is blazing. 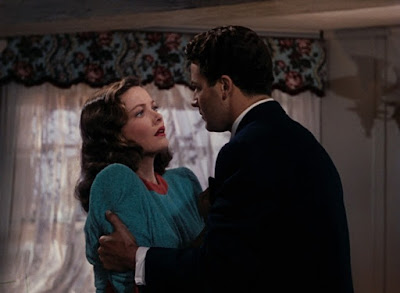 But then, he also doesn’t have to compete directly with Tierney. It also helps that he’s hot in ways that she’s cool, creating a balance between them. Tierney’s take on Ellen is sculpted out of ice and steel. The key to her villainy--and, arguably, to her sexiness--is how together she is. It’s not just that Ellen would never have a hair out of place, but that she rarely has an emotion out of place. She might seethe when she sees some competition for Richard’s affection, but the wheels immediately start turning on how to get the advantage back. Her best moment is that iconic scene on the lake, the one that is highlighted on the Criterion Leave Her to Heaven cover. In that segment, we see her coldly seize an opportunity and then course correct in order to cover her tracks when it appears she might get caught. 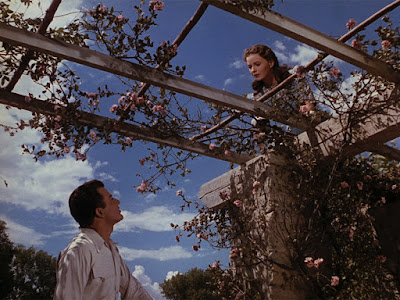 Leave Her to Heaven was shot by Leon Shamroy, the cinematographer of Elizabeth Taylor’s Cleopatra, but it’s worth noting that there is also a Technicolor director, Natalie Kalmus. The colors here are phenomenal. Tierney in particular stands out for her gorgeous clothes, like the baby blue swimsuit and nightgown that she wears for a couple of her worst deeds--a color that the internet tells me should resemble “trust, loyalty, wisdom, confidence, intelligence, faith, truth, and heaven.” I doubt this is a choice that was made without consideration. All of Leave Her to Heaven has an almost unreal pastel look to it, arguably Stahl’s replacement for the shadowy confines of noir. In his world, evil is bright and pink and has shiny red lips. 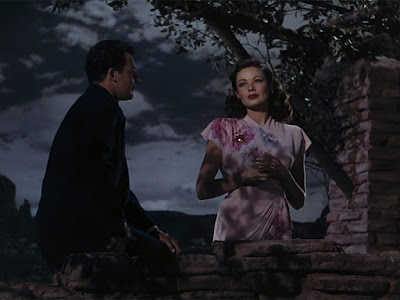