YOU CAN'T TAKE IT WITH YOU - CRITERION CHANNEL 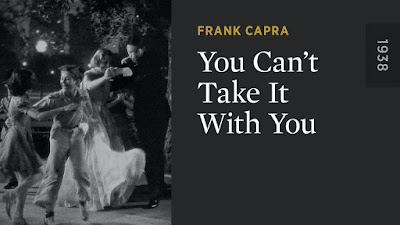 1938's You Can't Take It With You was adapted from a popular play by George S. Kaufman and Moss Hart, who also brought us The Man Who Came to Dinner, A Gentleman's Agreement, and the Judy Garland version of A Star is Born. Their text provides Frank Capra and writer Robert Riskin with what was then their largest central cast to date. Jean Arthur returns to Capra's set as Alice, the most stable member of the eccentric Sycamore family. When she becomes engaged to Tony Kirby (Jimmy Stewart, another Capra mainstay), the son of a wealthy financier, the fun-loving, free-living Sycamore family comes face to face with the uptight Kirby family. The two clash over issues of class, finance, and social propriety, and the question of whether or not the two can coexist is integral to whether or not Tony and Alice can really get married. 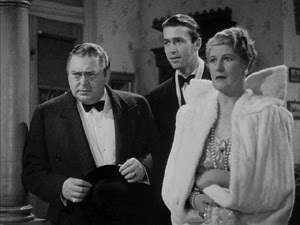 It took me a little while to warm up to You Can't Take It With You. The Sycamore family was a tad too obnoxious to stomach at first, almost like the Addams Family but without any of the cool creepy stuff. I came around largely due to the performance of Lionel Barrymore as the clan patriarch, Grandpa Martin. He sets the tone for their crazy lifestyle. As a former businessman who left the life of high finance for a life of high relaxation, he can school the Kirby patriarch, A.P. (Edward Arnold, Man About Town) in the loneliness that is the product of living your life as a series of acquisitions and mergers. You Can't Take It With You is actually more about those two than it is about the love affair between Tony and Alice. Grandpa Martin is the quintessential Capra man, and he has to teach A.P. to live as the Sycamores do.

Once I got past the initial noisiness of the Sycamores (as well as the hypocrisy of their household: it's all right for them to do as they please as long as they have black servants making it all possible), I started to really enjoy You Can't Take It With You. The role of Tony seems tailor-made for Jimmy Stewart. The boy is caught between two worlds. He has the sort of dreams you can only pursue as a Sycamore, but the sense of responsibility you get saddled with when you try to be a Kirby. The scenes of him wooing Jean Arthur when they are on their own, away from both families, are funny and charming, and next to the clash of the two older men, Tony's wrestling with his own soul is the main attraction of You Can't Take It With You. 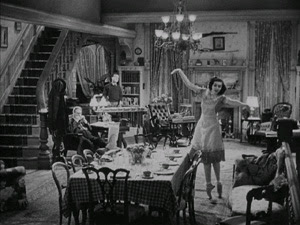