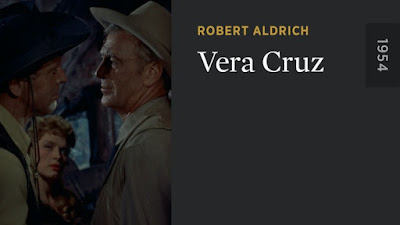 The 1952 cowboy picture Vera Cruz is one of the first big Hollywood movies to be shot in Mexico, so it's only fitting that it be a story about the Mexican fight for independence from European (and particularly French) occupation. The focus of the script is two American outlaws, both with different approaches to how they do business. One is a dangerous man, a smiling gunslinger named Joe Erin, and played by young star Burt Lancaster; the other is a man of honor, Benjamin Trane, portrayed by an elder statesman of American movies, Gary Cooper. Joe has gone to Mexico to escape a bounty on his head. Benjamin has traveled south of the border in order to leave behind a painful past: he lost his livelihood fighting for the Confederacy in the Civil War. That conflict was about a house divided, two sides of the same coin struggling for supremacy. So, too, is the Mexican revolution a division amongst the people. And likewise there is the division between the two mercenaries who choose to fight it.

Despite being an unlikely pairing, Joe and Ben team up, heading a posse that is hired by the foreign-occupying Emperor Maximilian (George Macready) to escort a rich aristocrat (Denise Darcel) across the country to the town of Vera Cruz, where a boat will take her and a treasure chest of Mexican gold back to France where she will buy more soldiers to hold back the revolutionary army. Joe and Ben make plans to steal the gold for themselves, but then they turn around and make plans to also steal it from each other. Joe romances the rich woman, while Ben makes eyes at a sexy Mexican bandit (Sarita Montiel). She also just so happens to be working for the Mexican army, who want the gold themselves. And, of course, Maximilian's lancers have a pretty good notion that all of these double- and triple-crosses are underway, and they set up their own ruse to keep their hands on the Emperor's coinage. 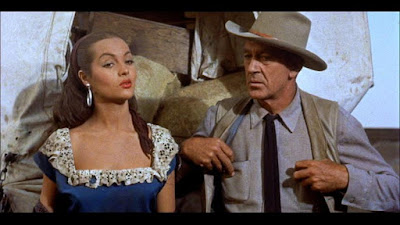 Vera Cruz is directed by Robert Aldrich, who also helmed The Dirty Dozen, another famous film about a band of rough customers facing impossible odds. The screenplay by Roland Kibbee (Valdez is Coming) and James R. Webb (Cape Fear) may feature a healthy cast of characters--Joe's original team includes such recognizable character actors as Charles Bronson, Ernest Borgnine, and Jack Elam; the Emperor's right-hand man is played by Cesar Romero--but the focus here stays tight on the main stars. The odds build against them as the movie progresses, ending in a giant battle between the Mexican and the European forces that claims a lot of lives. It's a gut punch of a finish, especially after the turbine engine plotting that gets us to this particular port of call. Vera Cruz generates speed as it goes, the chase growing more dangerous, the action more exciting. The resolution brings to bear all the compromises and consequences in a way that is both bleak and surprising. 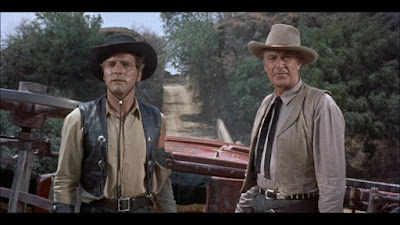 It's hard to see how it could go any other way, though. When there are two central but opposing forces, there will have to be some kind of reckoning between them. Gary Cooper and Burt Lancaster are perfectly cast as the hero and the anti-hero, and their disparate acting styles mesh surprisingly well. Cooper is stoic, mannered, and every bit the Hollywood hero; Lancaster is feral, unpredictable, and physical. He's not quite as twitchy and method as some of his contemporaries, but he's definitely more willing to engage in behavior otherwise unbecoming of a leading man than Cooper. As the other complications build up, so too do we see how nasty Joe really is and the full depth of the inherent good that defines Ben. The latter can't pretend to be the villain any more than the former can play at being the hero.

The movie itself embodies all of these things as well. Vera Cruz is full of the humor and the bravado and the clear-cut morality of classic westerns, but it also prefigures the darker themes and violence of the horse operas to come. Heavy is the head that wears the white hat, and what Cooper walks away from at the end of Vera Cruz may be more than a pock-marked battlefield and a chest of gold, it could be seen as a metaphor for the whole Western genre. 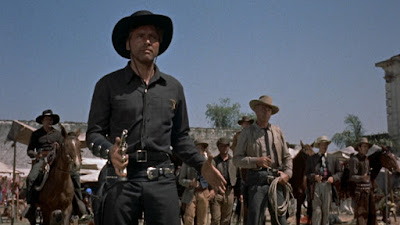