“You’ve got the subtlety of a bullfrog.” 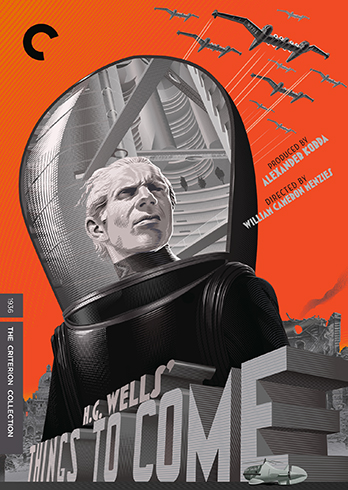 I popped Things to Come into the player expecting to see a quaint vision of modern times as imagined in 1936, fodder for my own fantasies that the here-and-now could, indeed, be better. What I found was something altogether different, and yet also apropos in its own strange way. For this film, Alexander Korda enlisted H.G. Wells to adapt his own novel into a screenplay, and then charged effects man William Cameron Menzies (The Thief of Bagdad [review]; Foreign Correspondent [review]) to direct. Seeing what they came up with, I find myself less concerned with how Things to Come reflects a potential 21st Century, and more fascinated by what it must have looked like to its original audience...and even moreso how they might have been shaken by it just a short while later.

Wells sets his story in the far-flung future of 1940, and the movie opens on Christmas of that year, with England on the brink of a second World War. Amidst pleas to focus on the yuletide, two men debate the prospect of conflict: John Cabal (Raymond Massey, 49th Parallel [review]) sees it as inevitable, while Pippa Passworthy (Edward Chapman, Rembrandt [review]) believes man will not make the same mistake again. Naturally, the more optimistic of the two is wrong, and Britain engages in a decades-long war with their aggressive neighbors. 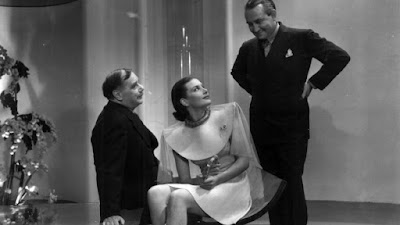 Though billed as “Everytown” throughout the film, these opening scenes look distinctly like London, and so the wholesale destruction of the city must have been extremely disconcerting for contemporary British audiences, especially if they had memories of having seen Things To Come when the German raids on England began just a few years later. I imagine it would have been something akin to what we might have felt had aliens come and destroyed the White House after the release of IndependenceDay. Menzies’ attention to detail is still: the images of bodies amongst the rubble of a one-time thriving community deliver a potent anti-war message. And as the battles rage on for the next several decades, only coming to a sort-of end in the mid-1960s, I can’t help but think of the open-ended war America currently finds itself in.

The Everytown scenario ca. 1966 is one of tentative peace. The townspeople are still at war with the hillspeople, and true to Cabal’s predication that war will stifle progress, technology has taken a few steps back. Fuel is scarce, and machines don’t run. Cars are now pulled by horses, just like the carriages they are meant to replace. The remaining citizens have also just come through a zombie-like plague, “The Wandering Sickness,” conquered not by medicine but by brute force. His plan to shoot anyone infected has elevated the Boss (Ralph Richardson, The Fallen Idol [review]) to a place of leadership. More Donald Trump than Hitler, “the Boss” continues to rule through fear and bullying, mostly content to close Everytown off from the rest of the world rather than expand too far into other pterritories. It’s a successful plan, and he would have gotten away with if if not for an aged Cabal arriving in a high-tech plane, wearing spaceman armor, and touting a new peace under the rubric “Wings of the World.” The Boss naturally distrusts this man from the skies, as any tyrant opposes science and invention that he can’t bend to his will. Cabal promises there are more like him coming, and the future of civilization depends on whether Everytown will join this cultural elite or be crushed by them. 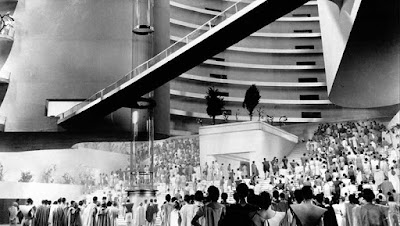 Looking back over the cycle of history, I wouldn’t exactly call H.G. Wells or Things to Come prescient. Mankind is far too predictable for that, it’s more that Wells has correctly identified a tragic cycle. Even so, it’s amazing to see how past generations grappled with their fears of oppression and being left behind by change, and how slow progress really is, war be damned. The key to putting Everytown back on the map is oil, and a battle is waged over a coalmine that will give them enough fuel to best their foes. Keeping the people ignorant is key to the Boss’ continued rule, and while men of skill are bullied into servitude, women’s ideas are still dismissed out of hand. 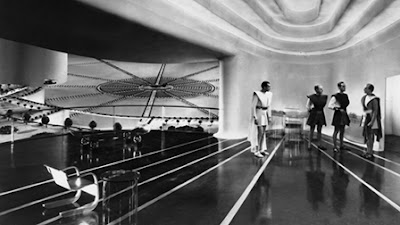 That Wells seems to be on the right side of these things speaks well for his philosophical character, but the future utopia he offers as an alternative seems ironically shortsighted. When Wings Over the World come in and unseat the Boss, using a “gas of peace” to put the townspeople to sleep, effectively removing their choice of whether to join or resist (and presented as a noble alternative to the poison gas we see in a depressing wartime scene early in Things to Come), it’s hard not to view the new management as more fascistic than what they’ve come to replace, good intentions opening the highway to hell as they do. This is even harder to ignore as we jump ahead in the 2000s and see the utopia that the airmen are ushering in: it’s sterile, impersonal, and referred to as “white” in a way that feels for more loaded than anyone intended, given that there is not one person of color in all of Things to Come. Likewise, the terraforming that makes this new civilization possible looks more like an ecological disaster now than the triumph of industry it must have appeared to be in the ’30s.

That said, the special effects that Menzies achieves, working with such talented people as production designer Vincent Korda (To Be or Not To Be [review]), special effects artist Ned Mann (The Private Life of Don Juan [review]), and director of photography Georges Périnal (The Blood of a Poet), are nothing short of astonishing, including the scenes where gigantic drills destroy an entire mountain. The future world that follows is a self-contained, towering labyrinth--reminiscent of Krypton, all artificial structures and impossible curves, brought to life by a nigh-seamless melding of models, rear projection, and full-size sets. This imaginative future is made all the more believable by the complicated tableau of Everytown. Menzies and his team give as much attention to the city in ruins as they do the world of tomorrow, bringing a realism to Shakespearian drama that essentially gives Things to Come its spine. 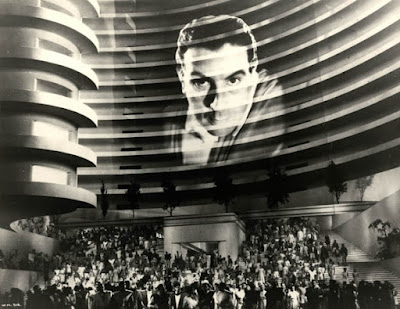 Here Theotocopulos looks more like an imposing fascist than what he opposes.

Even with all that to appreciate, though, it’s hard to tell what message Wells is trying to convey with his future society, and whether or not this brave new world is as difficult to maintain as other fictions have led us to believe. Things to Come creates a dissenting voice in Theotocopulos (Cedric Hardwicke, Richard III), a man that asks if there has been enough progress, if we should not focus on the society that already exists, and the initial debate from the 1940 scenes is reignited via Cabal and Passworthy’s grandchildren (played again by Massey and Chapman). Yet, there is something sinister in Cabal’s dismissing of Theotocopulos as merely representing “artists” whose work will be made small by his scientific accomplishments, especially when Cabal wins, successfully launching a rocket around the moon with his “space gun.” In his closing speech, Cabal declares that mankind cannot be stopped, nor should they. “All the universe or nothing,” he tells Passworthy, his face in profile, framed by the universe in all its sparkly glory. Is Wells not merely trading an ignorant tyrant for an intelligent one? Hitler and Mussolini dethroned in favor of Gore Vidal and Neal Degrasse Tyson. (And is this not what Superman’s parents warned us about?!)

With nothing really to balance that ending out, we can only presume that Wells believed some of what he preached, even if his cohorts in Things to Come merely wanted to make a timely motion picture with some pretty cool special effects. Their speculative fable was likely a rousing glimpse of better times that would become much needed in their immediate lifetime. Now it is an inadvertent time capsule, not of history as it was, but as it could have been. It’s also no less a meaningful parable all these years up the road, if perhaps a bit more complicated and in need of a more nuanced interpretation. 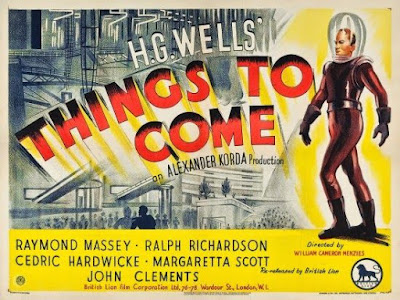