“You know, sometimes I think it’s giving the good Lord the worst of it to say He invented people.” 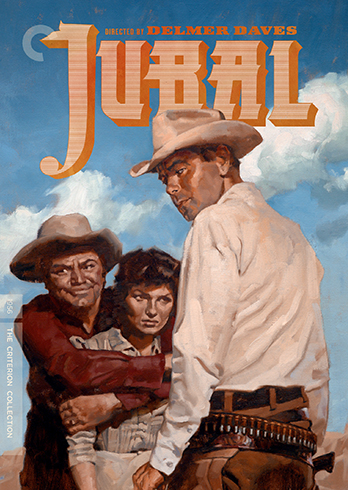 Loosely based on Othello, the 1956 western Jubal is a cowboy picture of intimate proportions. It focuses on Jubal Troop (Glenn Ford, Gilda [review]), a self-described victim of bad luck, who finds one good turn, only to be undone by another. From the sound of it, this is his circle of life. Same sheep dip, different day.

The script by director Delmer Daves (3:10 toYuma) and Russell S. Hughes, based on a novel by Paul I. Wellman, opens with a surprising image of a man falling down a mountain and onto the open road, where he is found nearly frozen to death before being taken to a nearby ranch to warm-up. This is Jubal, a lone wolf who left a gig sheepherding--a lowly position in the eyes of the other ranch hands--and stumbled into hard times on his search for someplace to hang his hat. The owner of the ranch, Shep (Ernest Borgnine, From Here to Eternity, and the star of the Marty motion picture) takes pity on the lost soul and offers him a job, despite the protest of one of his men, the acerbic Pinky (Rod Steiger, On the Waterfront, and star of the television version of Marty [review]). I suppose it’s just good instincts that make Pinky hate Jubal from the get-go, and not just the smell of lamb on him. Jubal is as honest as Pinky is craven, he is as hard-working as Pinky is shiftless. 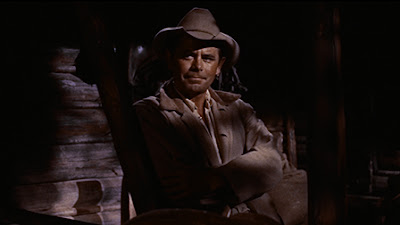 So it is that Shep’s young wife Mae (Valerie French, The 27th Day) fails to seduce the new employee the way she did Pinky. Not that the truth matters. Pinky will later use the idea of an affair to turn his boss against his rival. He is the Iago who plants doubts in Othello’s head, only this time Desdemona has much to answer for, and the would-be Cassio takes center stage.

I would say that Daves works in broad strokes, but the charm of Jubal is not just how simple the plot  but how complex the characters. The landscape is wide, but the people are small and driven by specific mechanics. There is plenty of life being lived here, on the screen and off. Shep and Mae have a complex relationship, where he loves his wife completely, perhaps partially because he knows he is a bit of a Frog Prince and no one expected him to be the man she’d end up with--though, given that this is Borgnine performing at his most gregarious, we don’t begrudge him this good fortune. Jubal is the straight man, but he is also a bit of a brooding anti-hero, running from a trauma in his childhood, caught between the femme fatale and the sweet blonde who could give him a happy life (Felicia Farr, Kiss Me, Stupid). And just what the hell is wrong with Pinky? Steiger plays the bad guy with an indefinable weirdness. He has a certain charm, yet like everything else about him, it’s impermanent. Pinky is a chameleon of convenience, his lies transforming with such ease, no one around him seems to notice he is changing his story. 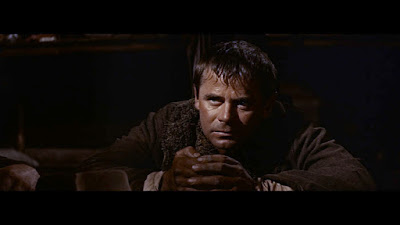 Even amongst the “Rawhiders,” ultra-religious nomads that end up on Shep’s property, Daves doesn’t paint an exact picture of moral goodness. In fact, their leader, Shem (Basil Ruysdael), named for the son of Noah who’s lineage gave birth to Abraham, notes that following the commandment of “love thy neighbor” is the hardest to stick to. The struggle of the characters in Jubal is to do right by one another. Jealousy, greed, and ego all threaten to knock man and woman alike from the proper path. Outside of the religious camp--which itself features dissenters and sinners--the most true to his code is Reb (Charles Bronson, Once Upon a Time in theWest). Even Jubal faces temptation and blinks (though just barely). Reb tells him, “You don’t have to play every hand you’re dealt,” yet Reb never once attempts to turn in his own cards and take care of himself first.

The ability to show how insignificant man is compared to the rest of the world is arguably exclusive to two genres: war films and westerns. In both, the landscape can overtake the individual, and the natural world tends to carry on while humans cut each other down. In Jubal, Daves and director of photography Charles Lawton Jr. take time to step back and enjoy the countryside. The widescreen photography shows the Wyoming wilderness in its full breadth, extending far beyond the petty concerns of the men who work it. Though we never see the characters going against the elements, there are hints of it, particularly how these transplanted predators are left to fear the unseen native predator, a mountain lion that is attacking their livestock. Pinky plays the wolf in sheep’s clothing when rescuing a calf whose mother has been taken down (maybe he’s the one who really stinks of sheep dip), and the cat is also used as a ruse to get Jubal alone with Mae on the night when it all goes wrong. But is that Mother Nature having the last laugh, or once again man using her as an excuse to do bad things? 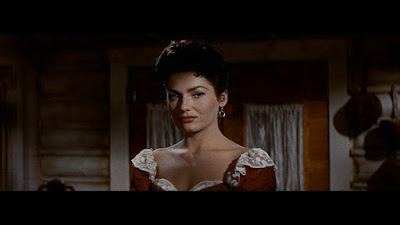 The ending of Jubal has some predictable elements, but also some darker details. Punishment is meted out to just about all who’ve earned it (though Shep doesn’t really deserve his fate, and Mae’s comeuppance is disproportionate to her misdeeds, the usual outcome for a femme fatale), and happiness comes to those who deserve it, too. In that, it avoids being the sort of tragedy that gave the script its jumping-off point, but I guess that’s the Hollywood innovation on the classic, the addition of the American Dream to Shakespearian formula: in the saddle, the good guys usually win. 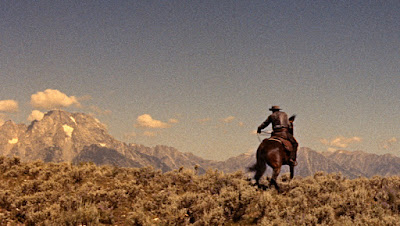