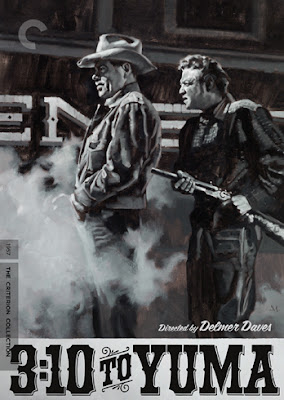 Based on a story by Elmore Leonard (Justified [review]), 3:10 To Yuma is a tight little thriller of a western. Shot by Delmer Daves a year after he made Jubal [review], it flips the script on that earlier morality play. Though don’t be fooled by its stripped-back cast and lack of color, 3:10 to Yuma is anything but simplistic or black-and-white.

Glenn Ford returns to Daves’ set, but this time as the bad guy. Outlaw Ben Wade gets himself into trouble when he uses a farmer’s cattle as a roadblock to rob a passing stagecoach of its gold. Little does he know, this careless act makes a reluctant hero of Dan Evans (Van Heflin, The Prowler), who just wants to keep his home intact until the longstanding drought breaks and gives his farm life again. Echoing Heflin’s role as the father in Shane [review], Dan’s inaction during the initial robbery causes two separate reactions in his sons: the older sees the sense of avoiding a gunfight with a dozen crooks, his youngest son thinks his dad should have taken them out singlehandedly. 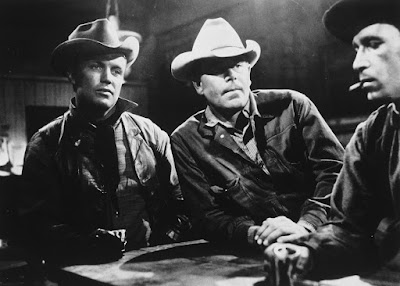 When Wade ends up getting himself caught stopping for a little romance in the nearby town, the local marshal (Ford Rainey) and the owner of the stagecoach (Robert Emhardt, No Time for Sergeants [review]) concoct an elaborate plan to distract Wade’s gang while Dan and the town drunk (Henry Jones) sneak him to Contention City (what a name!) where they can put their prisoner on the titular train to Yuma. Spoiler alert: things don’t go as planned.

3:10 to Yuma has plenty of shootouts, but the real thrust of the story is the dynamic between the two men, between the family man and the outlaw. Though their lives are very different, at the core, they are essentially the same, they just made different choices. Both abide by their personal sense of right and wrong, which is largely defined by their isolationism. Sure, Wade steals from other people for a living, but he’s mostly willing to leave anyone alone who leaves him alone. The cash his action brings him would solve plenty of Dan’s problems, and Wade uses that to lean on the farmer, to try to bribe him into undoing his handcuffs. At the same time, Wade sees something peaceful and honorable in the family life Dan has chosen. It’s a different type of security than money can buy, though for Dan to have his ideal and take care of his family with no outside help, it seems money is necessary. The tensest scenes come when the pair is locked in a hotel room, watching the clock, and the slick criminal is working on his captor’s conscience. 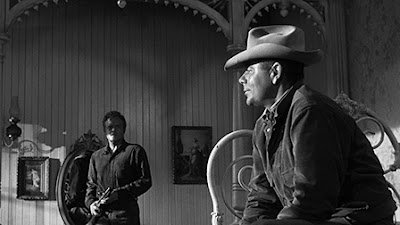 Ford strikes me as a better heavy than he is a straight leading man. Here he is confident and charismatic, aware that he is the smartest man in the room, and yet rarely showing that conceit to any of his marks. As the villain in this piece, he is defined by two conflicting actions: shooting his own man at the stagecoach rather than see the heist go south, and wooing the barmaid (Felicia Farr, also playing the opposite to her Jubal character, trading her blonde hair for dark) with what appears to be genuine affection. The cold first action is what heightens the urgency of the manhunt, and the warm second is what brings that hunt to a close. One can surmise that the dalliance with the girl was worth it, though one is also sympathetic to her poor decision. Daves chooses to film them after the deed in an uncomfortably close two-shot, Wade’s face partially obscured, hers fully exposed so that we can see she is at once satiated and broken-hearted, knowing that there is no tomorrow for this one-night stand.

On the other end of things, Dan’s thoughts are all about tomorrow. If he gets through this, he can get enough money to purchase temporary water rights from his neighbor. At the same time, he holds out hope that the rain will come, that a man will be rewarded for doing the right thing, that he won’t need to indebt himself to another. Though religion never really comes into it, not even in the tangential way it influences Jubal, Dan’s is the plight of the religious man, with his sons representing the angel and the devil on each shoulder, pride and reason, and his wife (Leora Dana) providing the center. She makes her own dumb choice in the final third of the film, but at the same time, it’s one motivated by her dedication to her marriage, and one that fortifies Dan’s resolve, even as most of his allies desert him. 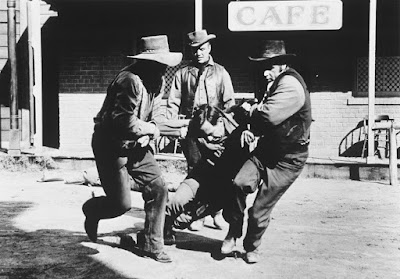 Of course, this isn’t a true religious parable, nor does man need religion to adhere to an ethical code--something a lifetime of westerns and noir will teach any cinephile. The action here is all ground-level, and the temptation earthly. There is also a fundamental plot that is so pure here, James Mangold barely messed with it for his excellent 2007 remake [review]. That last rush to the station is still a rush! When it comes down to it, it’s all about keeping on the right path, about getting the bad guy to his destination regardless of the obstacles that appear in front of you. Thus, if Wade is the true devil, he offers Dan true redemption, even giving his own helping hand at the end. 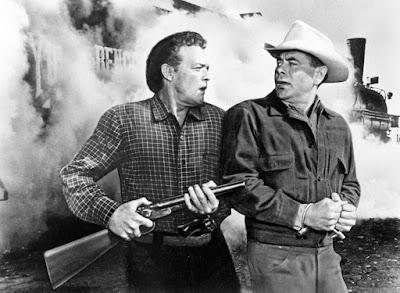