"What is romantic about spending your life telling women they are everything they are not?" 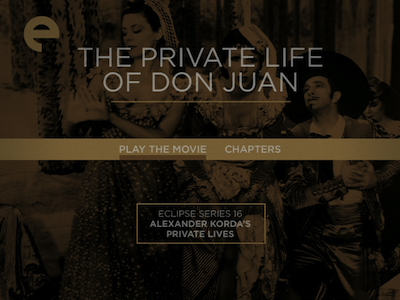 The jocular tone of Alexander Korda's 1934 film The Private Life of Don Juan is evident from the get-go, as is its sexual undercurrents. Or should I say overcurrents? The movie opens on a fountain spraying high into the air as a minstrel sings the ballad of the titular lover, the unseen Don Juan, desired by wives, hated by husbands. Women all across Seville are forlorn because their love lives have dwindled since the famous ladies man departed, only to have their spirits lifted as a mysterious figure, appearing to us only as a shadow, arrives beneath their despondent balconies to toss them a flower. Could it be that Don Juan has returned to woo them anew? Passion erupts, just like that fountain, rising up and going...well, nowhere. 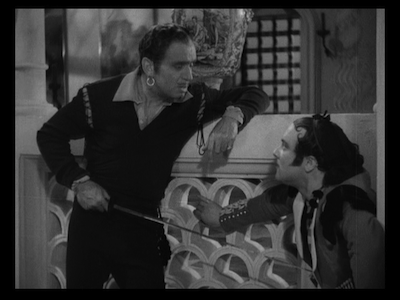 The Private Life of Don Juan isn't so much a romantic comedy as it is a comedy of romance. Korda and writers Frederick Lonsdale and Lajos Biro (a regular on Korda movies, but who also wrote von Sternberg's The Last Command [review]), working from a play by Henri Bataille, aren't interested in the legend of Don Juan, except to skewer and deflate it. Screen legend Douglas Fairbanks, here in a rare talkie and also starring in his final feature, leads the film as the heroic lover. He has snuck back home under a veil of secrecy, hoping to avoid being jailed for debts that his angry wife, Doña Dolores (Benita Hume), has purchased in order to lord them over his head. Don Juan has seen better days. He is older and tired, maybe a little like the aging actor who plays him, not as ready to perform as in the old days, and also finding that he is being replaced. The man handing out flowers wasn't Don Juan, though now the whole town thinks it was. It's a new casanova looking to follow in the Don's footsteps.

Opportunity strikes when Don Juan leaves his wife waiting yet again, choosing instead to woo the pretty dancer Antonita (Merle Oberon). While he makes love to her, his doppelganger is straining his back to climb a balcony in another part of town. When the fake Don Juan is run through with an angry husband's sword, the real deal sees a way to sneak off, avoiding handcuffs by playing dead until he can save up enough to buy his way out of jail. Only, once Don Juan has gone, a new industry springs up around his memory. A scandalous, exaggerated biography becomes a best seller, and an opportunistic playwright crafts a stage production celebrating his alleged exploits. Fearing his legacy has gotten beyond his control, Don Juan returns to Seville to announce he is alive. 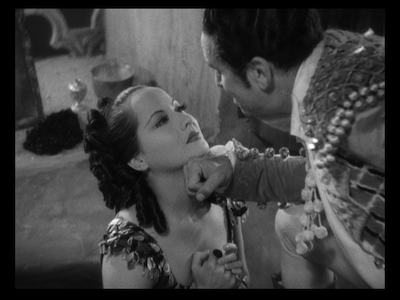 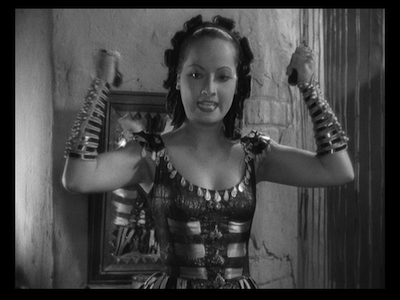 And here is where the true sting comes. No one will believe this middle-aged man is the real Don Juan. Antonita remembers him as younger, with a different mouth and blue eyes. The theatre audience laughs at the legendary lothario when he interrupts the play. There is no way for the man to live up to the mythology that exists around him. The truth is not important. When the play's author asks the audience which they'd prefer, a Don Juan who is just a man or the one who is a heroic phantom, they choose the phantom. 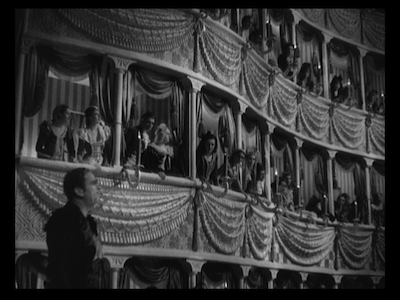 It's a fairly prescient depiction of the downfalls of fame. Old Hollywood and its stars had a particular knack for creating actors to fit a predetermined image. Douglas Fairbanks Sr. was known for his stunt work and his suave persona, and he must have more than once been in a situation where the truth couldn't live up to the publicity. One has to respect his lack of ego for poking fun at himself here. He's still very charming on screen, smiling and laughing, even as the Don Juan act falters. In the film's final scene, his usual lines are turned down, the woman he says them to has already heard them. Don Juan has no defense. That gambit is all he has. It's a revelation both mirthful and mournful. The old soul is accepting his new position. The myth is learning to be fine with being just a man.

, the indie director's own film about the twilight of a ladies man. It's the movie that Bill Murray's character, also named Don, is watching early in the film, as he realizes how alone he really is. Jarmusch has picked this section for a reason. Korda's scene has a lot of emotional subtext. Here is the man, believed dead, standing amongst a legion of black-clad women who have come to mourn his passing--and he knows not a one of them. These aren't his actual lovers, these are women who believed in the fantasy, who are crying over something they never had. In reality, for all his conquests, Don Juan is alone. Sure, he is amused to be cut loose, but then frustrated that he can't reclaim his identity. Don Juan has to shed everything to learn what's truly important. He has to understand his biggest fib is not his practiced rap, but everything he pretended to be. People believe the lies because there was no other truth. 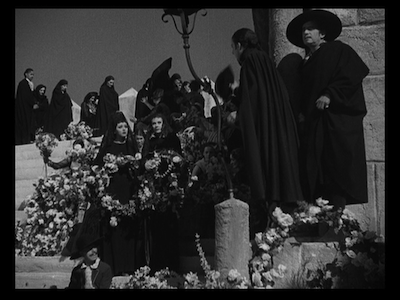 The Private Life of Don Juan has a heavy meaning, but it's not a heavy movie. Far from it. It's the lightest of the Alexander Korda pictures in the Eclipse set. The episodic script moves quickly from one scenario to the next, a series of quick comic bursts, some of them schticky, some of them sensual, sometimes both. The culmination is probably when the exiled Don tries to show a barmaid (Binnie Barnes) that he can be everything his biography claims him to be, but it takes a couple of tries to deliver the "hot lava." Korda is having fun peeling back the curtains to peek into the bedroom, to show the construct behind the myth. Just as Flora Robson stole The Rise of Catherine the Great [review] in her showy supporting role as the Empress, The Private Life of Don Juan is taken over by Melville Cooper, playing Leporello, the long-suffering organizer of Don Juan's life. He's the one who makes sure Don Juan eats the right food to stay in shape, and who organizes his social engagements. Cooper is like the 1930s equivalent of F. Murray Abraham, blustery and forceful and very funny. The biggest laugh comes midway through the film when he cuts one of Don's hostesses to the quick, saying his favorite meal is a gabby old woman's tongue. And not while it's still in her mouth. 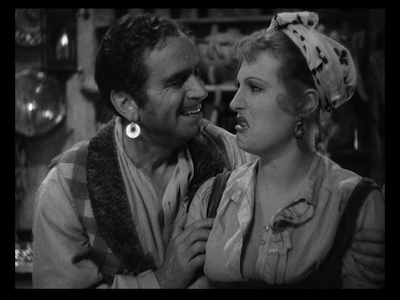 What really makes The Private Life of Don Juan work, though, is that Korda doesn't sacrifice that glib tone in order to make his point. Don Juan settles down and expresses his lesson learned, but he delivers his epiphany with the same blithe manner as he has said everything leading up to it. It's a new seduction, you see, one that is about allowing himself to be seduced as much as he is doing the seducing. He's falling in love with life in a whole new way. 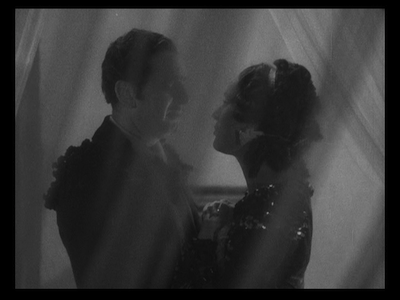 Every review of this movie I've seen misses the entire point: it is not a light comedy, it is a meditation on celebrity, and specifically on Douglas Fairbanks himself, his amazing career.....it's a superb swan-song...beautifully directed and produced.....and with an extremely touching performance by Fairbanks, who was literally living this part. It is a very nuanced, gentle, humble, naked performance, unlike anything he'd ever done. He dialed it down a lot (an actor known for being larger than life). Like Mary Pickford's "Secrets", this reveals that Fairbanks was a great actor, had figured out acting for sound, and could had more great performances in him if he had wanted to continue. As it was, he died four years later.

During the filming of this, Fairbanks himself was involved in a huge show-biz scandal when he was photographed leaping out of his mistress's window....his wife, Mary Pickford, America's Sweetheart...humiliated publicly, divorced him soon after, and people pretty much rallied behind Mary, and cast Fairbanks as the villain. I believe that had this scandal not happened, the film would have been a hit, and rejuvenated Fairbanks' fading career.

As "The Iron Mask" is Fairbanks' farewell to the silent film, this movie is simply Fairbanks' farewell to film itself and acting. The more you know about Fairbanks' career and life, the more you'll "get" the movie. (movie audiences at the time definitely would have "got" it). Fairbanks doesn't do many stunts in this, but what little he does, hopping onto a horse, or climbing down a balcony....he always does with such effortless grace....contrast that with the Don Juan imposter.....audiences would have caught all that in an instant, and if you view it through that lens, "The Private Life of Don Juan" is a truly great, heartbreaking but beautiful film.