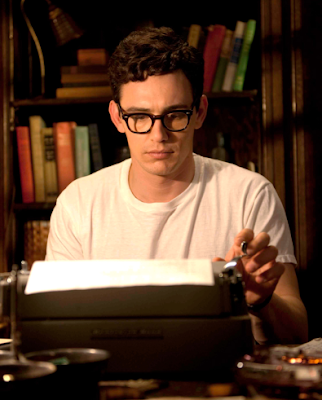 Howl was the definitive poem of the Beat era. Published in 1955, it chronicled the decadence and madness that its author, Allen Ginsberg, saw as lining the underbelly of the American psyche. Combining jazz-age slang with the flowing lines of Walt Whitman, the frank and often vulgar imagery in Ginsberg's new expression sparked a firestorm of controversy and caused its publisher, Lawrence Ferlinghetti, to be charged with obscenity. The trial that ensued, the circumstances of his life that lead Ginsberg to compose the piece, and the lingering meaning of the poetry is the subject of the movie Howl, a sometimes delirious, often compelling dervish of style.

The script for Howl is constructed using various interlocking stories. There is the younger Ginsberg, shot in black-and-white, as he composes the poem, and then there is a slightly older, bearded Ginsberg in color, giving an interview to an unseen journalist while the obscenity trial is being carried out elsewhere. In both, Ginsberg is played by James Franco (Pineapple Express [review], Milk), and it's amazing how a change in film stock and the addition of facial hair can differentiate two stages of a performance. Franco is exceptional in the role--sometimes too exceptional. Particularly in the interview sequences, his impression of the poet is so spot-on, it's almost impossible not to notice. The quality calls too much attention to itself, demanding you recognize that it's James Franco being Allen Ginsberg and not just a conventional approximation of the same.

Howl also cuts away from the author to show us Ferlinghetti's trial (the publisher is played by Andrew Rogers, though I don't think he ever gets a line). David Strathairn (Temple Grandin, [review]) plays the prosecuting attorney, while venerable character actor Bob Balaban (Close Encounters of the Third Kind) sits on the bench. The defense attorney Jake Ehrlich is played by Mad Men's Jon Hamm, who brings an intelligence and presence to an otherwise standard role. Co-writers and directors Rob Epstein and Jeffrey Friedman, who previously made the documentaries The Celluloid Closet and The Times of Harvey Milk, bring their fact-based approach to this dramatization, working with court transcripts and public record to recreate the events as they happened. This means some exceptional closing speeches from Hamm and Balaban, as well as some surprisingly small-minded testimony from expert witnesses, with Mary-Louise Parker and Jeff Daniels taking those cameos. 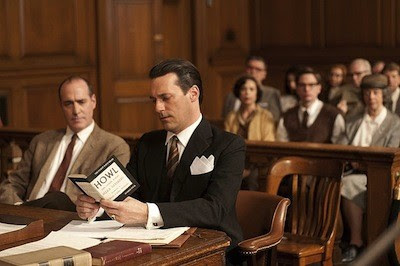 These fairly straightforward elements are regularly interrupted by the poem itself. James Franco performs the piece in both cases, sometimes on camera in a café reading (with Jack Kerouac and Neal Cassady in attendance), sometimes off camera. In the latter case, the material is brought to life using animation designed by Eric Drooker, who was the illustrator on several collaborations with Ginsberg (including a comic book version of Howl). These sequences look very cool and are full of movement, even if some of the imagery is a little on the nose. Personally, much of Ginsberg's work, and the Beats in general, strike me that way, so it seemed right-on to me. The Beats sometimes come across as comical, a little too insistent on the coolness of their own hedonism.

Epstein and Friedman use this approach to zero in on the importance of Howl, its artistry and social impact, while also avoiding the standard problems of a biography picture. The aesthetic reminded me a lot of American Splendor, Shari Springer Berman and Robert Pulcini's portrait of autobiographical comic book writer Harvey Pekar. American Splendor was phenomenal in how it introduced audiences to not just Pekar the man, but Pekar the artist, blending the individual with the work. In that, Howl is successful, as well. The film requires no prior knowledge of Ginsberg or his poem, but you will walk out feeling like you know it inside and out. 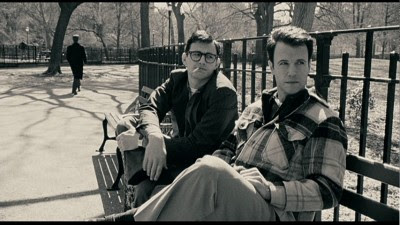 If there is one thing I wish Epstein and Friedman had borrowed from their predecessors, it's that maybe they had included more documentary footage of Ginsberg outside the very tiny snippet we get at the close of the film. Maybe that would have added a little more weight to Howl. The movie dazzles on a technical level (it was shot by the marvelous Edward Lachman, who has worked with Sofia Coppola, Todd Haynes, and others), and Ginsberg's lyricism still has the power to hypnotize over half a century later, but as cinema, Howl somehow ends up feeling very light. The filmmakers have a greater point to make about social identity, expression, and the gay experience--Ginsberg was a gay poet, and his work never hid that fact--and all of that comes across, but it feels oddly clinical. It's like a history lesson more than it's drama.

Still, for anyone who is interested in art, writing, or the power of either to effect social change, Howl still has a lot to offer. The story is a triumph of the system, an example of how the law can work and how reason can prevail. At a swift 90-minutes, Howl moves with breathless precision, and though it probably won't spark any revolutions itself, the movie is definitely illuminating. 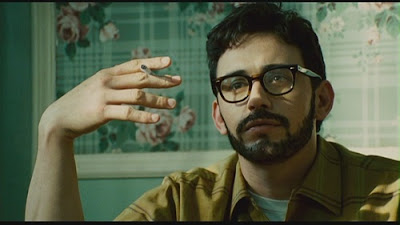