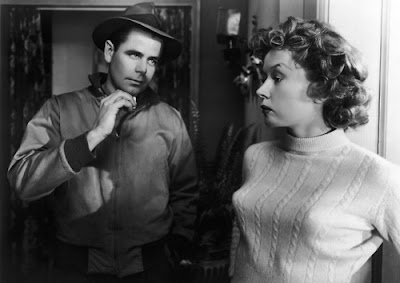 I am continuing to work my way through the Criterion Channel’s “Columbia Noir” bundle, a collection of crime and melodrama spanning three decades of the Columbia studio. You can see my first group review here; it appears this collection will be off the Channel at the end of the month, so hurry if any of these sound like your thing. 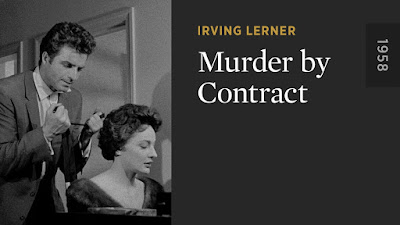 Murder by Contract: This raw 1958 hitman picture from Irving Lerner is considered a B-movie classic, lauded by Martin Scorsese and others for its rough-hewn, independent style. It’s a bit like Allen Baron’s Blast of Silence [review] in that what it lacks in polish, it makes up for in earnestness.

Vince Edwards, who played Val in Kubrick’s The Killing but was probably best known as TV’s Dr. Ben Casey, stars as Claude, a self-motivated would-be contract killer looking to earn enough cash to buy a house on a lake far away from the grind. Claude’s m.o. is that he uses his brains rather than weapons, avoiding any pitfalls that might lead to the police tracking him down. After a few successful jobs, he is sent to Los Angeles to take out a nightclub performer (Billie Williams) about to testify against a colleague of Claude’s boss. With the trial a few days away, Claude decides to soak up Hollywood...only to find the time wasted when the girl proves harder to kill than he thought. 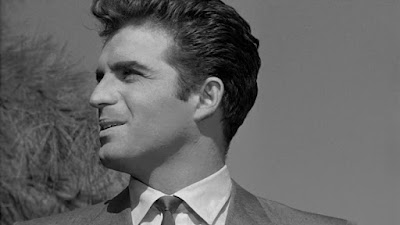 It’s funny to watch Murder by Contract now, as it’s hard not to think about the HBO show Barry, in which Bill Hader plays an assassin who tries to leave the life to become an actor. Too bad Murder by Contract has none of Barry’s wit, character, or even action. This is all pretty standard stuff, obviously done on the cheap, with little editing or rewriting applied to Ben Simcoe’s sloppy script. The narrative meanders, and Edwards appears committed to the role but incapable of delivering what that commitment requires. 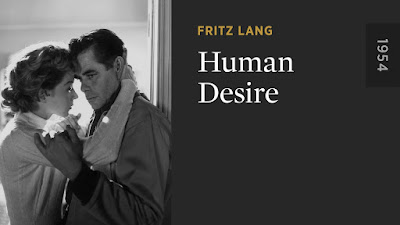 Human Desire: Master director Fritz Lang had scored a noir hit with The Big Heat, also for Columbia, in 1953, and Human Desire sees him reuniting his principal cast a year later for another go. This time, Lang is adapting La bête humaine, the Emile Zola novel that also inspired Jean Renoir’s excellent 1938 drama of the same name [review]. Glenn Ford takes over the Jean Gabin role, playing Jeff, a fresh discharge from the Korean War returning to the small town where he grew up to pick up where he left off. Jeff is looking to resume his quiet life as a train conductor, renting a room in a house with his co-worker, the man’s wife, and the growing daughter who has eyes for the levelheaded boarder.

Enter temptation. On a random trip, Jeff crosses paths with Vicki Buckley (Gloria Grahame), who lays on the charm. Little does Jeff know that Vicki’s flirting is to distract Jeff from finding the body of the man her jealous husband, Carl (Broderick Crawford), just killed. As Jeff is drawn into Gloria’s web, he soon ends up covering for her misdeeds and heading toward the inevitable: he’ll have to kill the husband if he wants the wife all to himself.

Stylistically, Human Desire has more in common with Lang’s 1952 steamer Clash By Night than it does The Big Heat. The title says it all: this is a plot about base emotions and internal struggle. Grahame sizzles as the manipulative femme fatale, playing off nicely with Jeff’s more earthy paramour, the innocent who can see no wrong in the man she loves (a noir trope). Ford conjures some of that grinding anger that worked so well for him in Gilda [review], but the real star here is Broderick Crawford, who portrays Carl as scheming and black-hearted, but also nervous and insecure. He makes the violent creep almost sympathetic. 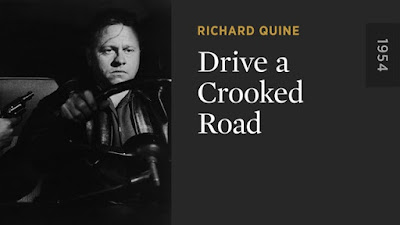 Drive a Crooked Road: Okay, now this is more like it. This 1954 crime piece from director Richard Quine (Sex and the Single Girl [review]) is sharply written and unflinching in its dark cynicism. Mickey Rooney plays Eddie Shannon, a natural wunderkind with a car engine who also likes to race from time to time, but always comes in second. Ribbed at work for being short, and self-conscious about the scar on his face, Eddie is a lonely guy just getting by.

Enter into his life Barbara Mathews (Dianne Foster, The Last Hurrah), a Beverly Hills swell with a car that needs his special touch. When Barbara takes Eddie outside the garage, however, it’s she who will be applying her own special touch. Barbara is a unique kind of femme fatale--she plays the part of the loving, open girlfriend so convincingly, there isn’t even a hint that Eddie is being played. Rather, it’s guys in Barbara’s social circle who eventually approach Eddie, looking for a driver who can navigate the winding California roads. 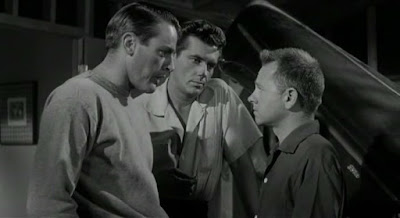 Quine makes great use of the landscape, from beach to mountain to the almost space-age confines of Eddie’s dealership. There’s a sparkle to it all that hypnotizes our protagonist, and though Eddie is an A-grade patsy, Rooney brings empathy to the role. You really feel sorry for the guy, and Foster is such a warm presence, so kind, it feels like a double betrayal when it goes wrong. These factors give special stakes to Drive a Crooked Road’s finale, affecting who we root for and why in a way that has more emotional truth than the standard noir payoff.

To see Mickey Rooney in a similar role, and also just to see another quality film noir, also seek out Quicksand from 1950. 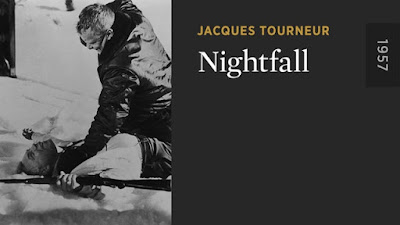 Nightfall: Jacques Tourneur could bring style to any genre, be it horror like I Walked With a Zombie [review] or the quintessential noir Out of the Past. While his 1956 Los Angeles crime picture Nightfall does not necessarily rise to the level of that classic Robert Mitchum collaboration, it’s still a solid chase picture in its own right.

Aldo Ray (Miss Sadie Thompson [review]) plays Jim, a Navy vet built like a quarterback with a cool, gentle demeanor. Jim is hiding out in Los Angeles, where he is being watched by several pairs of eyes. Most notably, by two crooks, John (Brian Keith, The Parent Trap; The Pleasure Seekers [review]) and Red (Rudy Bond, On the Waterfront), bank robbers who ran across Jim in Wyoming while on the run. That tussle left one man dead and a bag of money went missing--money the pair of hoods believe Jim is hiding. 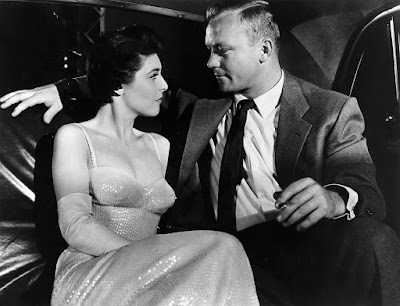 It just so happens the night they catch up with Jim is also the night he meets Marie (Anne Bancroft, The Graduate [review]), a lonely model who lucks out by meeting the one gentleman in Hollywood. Or so she thinks. Her chance encounter puts her in danger once Jim gives the bad guys the slip, and the two of them end up in a race to get out of town and find the cash.

Tourneur, working with a script by Stirling Silliphant (In the Heat of the Night [review]), strikes an interesting balance here. The hunt has all the great tension of an urban thriller, while flashbacks to Jim’s story, and really the man himself, have the easygoing calm of a farmland drama. The blonde patsy is not your typical noir hero. His voice is soft, his vocation is art, his origins are rural; he’s a light fish swimming in a dark pond. That means when we shift to Jim’s terrain for Nightfall’s snowbound climax, things get a little quieter than we are used to in a noir showdown, but Tourneur and Silliphant are letting the characters dictate the action, bringing the hunter and the hunted full circle to have an ending that perfectly suits who they are. 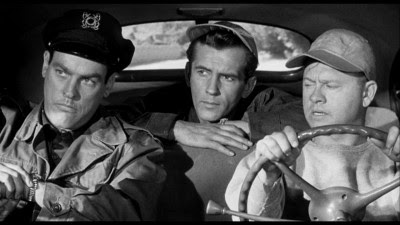