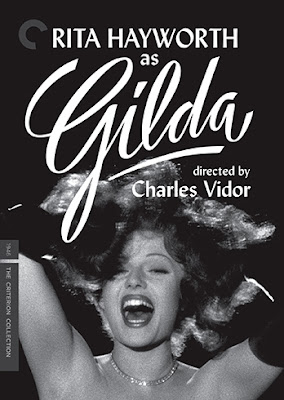 A friend of mine once proposed a game. Pick three classical Hollywood actresses that, when combined, form your perfect woman. My answer? Audrey Hepburn, Lauren Bacall, and...Rita Hayworth. (Note: We played it with men, too.)

There’s a pretty good chance that Rita Hayworth was my first femme fatale.

I’m not sure what first drew me to Gilda. My memory suggests I saw a clip of her famous onscreen arrival in some documentary about cinema, or maybe I saw a photo from the film in a book about film noir. I had an image of Jane Greer on my bedroom wall, photocopied from one of those books, a year or two before I ever saw Out of thePast. It’s also possible I found Gilda completely by accident, one of those odd movies I discovered by scouring the TV guide every week, studying every station that was known to show old films, and programming my VCR accordingly. For years I’d cart those VHS tapes around, 3 movies per, recorded at SLP. 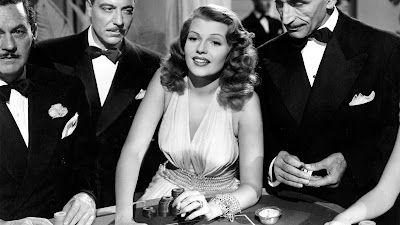 Regardless, it was a significant moment. My sudden obsession with Hayworth was not like my fascination with Marilyn Monroe, which was fueled by the industry behind her persona; nor would it be like my discovery of Audrey Hepburn, who was never a sexpot or dangerous, but was more of an aspirational Cinderella, someone to emulate more than desire. Bacall came as part of the Bogie & Bacall package, and I wanted to be him in as much as I wanted to deserve her. Rita Hayworth felt like my own discovery. Surely no one else knew about her. Otherwise they’d all be talking about her! (Fittingly, my next Hayworth score was Cover Girl, a movie of a much different kind, and a quick lesson that she wasn’t always “bad.”) 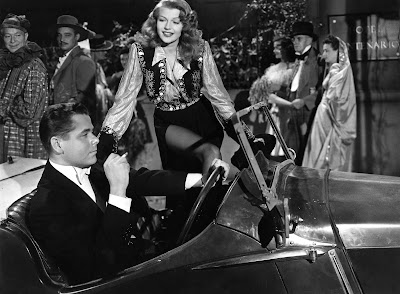 Despite its Hayes Code-inspired “crime doesn’t pay ending,” Gilda still manages to be a fairly salacious movie, working with the imposed restrictions as a positive rather than a negative. Rita stripping off one elbow-length glove in the big “striptease” scene is the greatest argument for censorship you’ll ever see. It’s sexy and sensual and suggestive in a way a more explicit version would have never been. Because it’s also about character, and in context, it’s a spectacle that can be viewed as more sad that seductive.

Which is the real trick of Charles Vidor’s 1946 noir drama. Gilda is a bundle of conflicted emotions. It’s a film where the characters all insist that they make their own luck, but then proceed to consistently act against their best interests. Loyalty can be bought, but grudges are never forgotten. The past is something to be shed, yet it’s always present. “I was born last night,” Glenn Ford’s Johnny Farrell tells his new boss, Balin Mundson (George Macready, Paths of Glory [review]), moments after the man saves him from being robbed. Balin then invites him to leave his low-rent gambling for something more high-class--namely, Galin’s casino--and a chance to make himself over. Of course, this is not true, there is no tabula rasa or hard reboot. Both men bring baggage with them. World War II may have just ended, but another more personal war is about to begin. And it has Nazis, too! 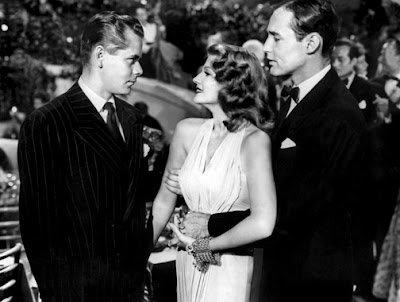 What Johnny isn’t prepared for is Balin taking a wife, and for that wife to be Gilda (Hayworth), the woman who broke Johnny’s heart, unmooring him, and leading him to wander to Buenos Aires, where this action all takes place. A woman coming between two men who have a friendship or partnership of some kind is an old trope, but it very nearly transcends gender here. (Balin, at one point, says, “My wife does not come under the category of women.”) It’s a triangle where each person wants to be favored over the other, while also wishing, in a weird way, that the other two will choose each other so the odd man out can watch. Balin, in particular, looks longingly at Johnny while practically pushing him and Gilda together. Love and hate are interchangeable, and a relationship is a deal to be made. “Do you want me to like him?” Gilda queries, not long before she declares “Let’s hate her!” in sympathy of Johnny’s terrible past.


Of course, the woman she is willing to hate is herself. She has made a bad deal, and now she is a kept woman for a man who is incapable of love and sees her as an object. What gives the famous song-and-dance scene its undercurrent of sadness is it’s Gilda acting out in the only way that brings her approval. In our introduction to the character, she gives a private performance to her husband and lover; in the nightclub, she does it for anyone who will watch, riling up the men in the crowd, but more importantly, getting a rise out of Johnny who, deep down, does not want to share her. The song she sings, “Put the Blame on Mame,” has an ironic, almost meta slant, celebrating the misdeeds of famous femme fatales who caused elemental shifts in the world around them, including starting a deadly fire. The irony is that Gilda doesn’t really cause all that much trouble herself, her efforts are thwarted by men who are too caught up in being angry to actually do much about it.


Johnny is a weird character. He takes the existential noir code a bit too far. Midway through Gilda, when Balin is believed dead, Johnny steps into his shoes, entering into a faux marriage with Gilda that puts him in the role of protector. Rather than be with her because he loves and desires her, however, he is doing it to preserve their commitments to Balin. Johnny will make Gilda the dutiful wife she never was for her husband. Johnny will guard the man’s “things.” He is honoring his pact with the dead man, staying faithful because that’s what Balin paid him for.

Despite my undying love for this film, I can admit it’s a bit lopsided. Both Macready and Ford give fairly one-note performances. Johnny can be a bit of an uptight bore, to such a degree that when he finally unclenches--almost quite literally--in the final scene, it feels like a relief, like we can relax ourselves. His hunched shoulders and ours drop simultaneously. Which might be why that ending works despite seeming a bit tacked on. It’s a rather bright conclusion for a noir, but Gilda is kind of a bright noir in general. The casino setting means just about everything is lit up, and what shadows there are exist to hide dirty, ugly things (those Nazis!). Johnny starts in the darkness, it’s where Balin rescues him from. The cinematography here is by Rudolph Maté, who also shot Hitchcock’s Foreign Correspondent [review] and Lubitsch’s To Be or Not to Be [review]. Though perhaps more apropos to this, he shot Alexander Korda’s That Hamilton Woman [review], another film about a love triangle and denied emotions, though one where the separation of  the lovers is due to other circumstances than any personal kinks. Still, compare Maté’s use of big set pieces there to his work here. 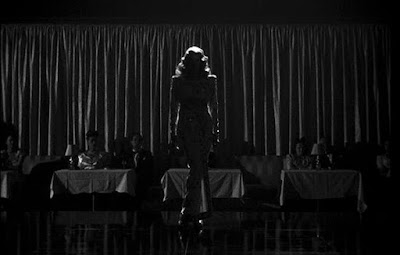 Gilda needs these big stages because all the better to showcase Hayworth. One could say she is as much the film’s object as she is Balin’s, she is there for the audience to watch alongside the men in her film. Yet, one could never consider Hayworth to be a passive performer or remotely contained. The moxie she gives Gilda makes her male co-stars appear all the more dull, they can’t measure up. Hayworth is fierce and bold here, with only hints of the world-weary pallor she would put to good use in later films like The Lady From Shanghai. She would revisit this fierceness in 1953 in Miss Sadie Thompson [review], which treads some of the same ground as Gilda, except with an older and more steady Hayworth at the center of the screen.

But, as they say, there’s still nothing like the first time. Gilda wasn’t Hayworth’s film debut, but it often feels like it. At least for my film-going experience, it was when she arrived, and with such spectacular style, she made sure I’d never let her go. 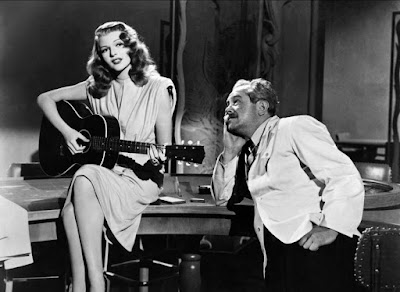