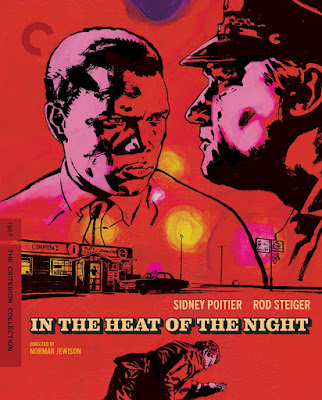 Sometimes I just can’t find my way into a review.

It’s been five days since I watched In the Heat of the Night, and I’ve spent those days skulking past my computer, afraid to make eye contact with the screen, completely at a loss how to begin writing about Norman Jewison’s 1967 cop drama. A landmark of its time, and a template for many well-meaning race-related pictures to come, In the Heat of the Night is a crackling good film. It reminds me of Otto Preminger’s Anatomy of a Murder [review] in how engrossing it is, how easy to watch, how transcendent of its own genre. 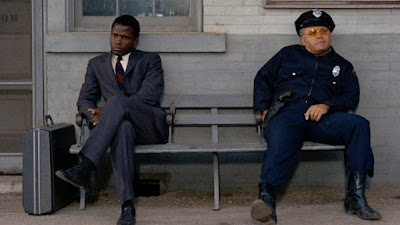 But what perspective do I bring? I can acknowledge it’s a classic. I can graze up against the deeper issues of 1960s race relations and compare it to today, particularly the healthy distrust of law enforcement. I can talk about how Jewison avoids the folly of so many by neither making his black cop a saint nor his white cop a pure devil, how they are flawed men hampered by their own pride, and thus there is no real vindication or redemption for either, they just carry on. Surely all of this has already been said, though. Mayhap I am better served just cracking this process open and getting on with it.

Here’s the easy thing to explain: the plot. A man is found dead face down in the streets of Sparta, a small Mississippi town. The victim is a real estate developer from out of state looking to build a factory in the area. It would change the lives of the unemployed poor, but also disrupt the town’s established economy. In short, there are a few rich white folks that would rather not see the system altered. 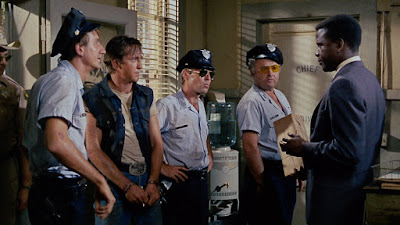 Coincidentally, Homicide Detective Virgil Tibbs (Sidney Poitier, A Raisin in the Sun [review]) gets stranded in Sparta on a layover waiting for his train to Pennsylvania. At first he is arrested by an overzealous cop (Warren Oates, Two-Lane Blacktop [review]) who finds an unknown African American with a wallet full of cash suspicious, but once his identity is revealed, Tibbs is asked to participate in solving the murder. Newly appointed Police Chief Gillespie (Rod Steiger, Jubal [review]; On the Waterfront) would prefer not to take Tibbs’ help, fearing it will be more trouble than its worth, but once Tibbs takes the case between his teeth, Gillespie has little say. No one does, not even Sparta’s roving packs of violent racists or the brittle eccentric living in the big house on the outskirts of town. Tibbs won’t stop until the true culprit is in jail. 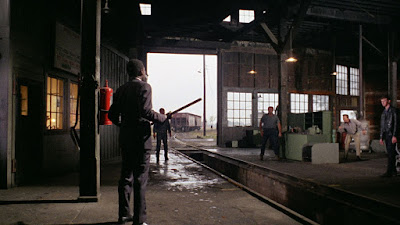 Poitier and Steiger make a great pair. The former is all forward intensity, and the latter reserved agitation. Gillespie is definitely a racist, but he’s also a pragmatist. One could argue he resents Tibbs as being an interloper from the big city as much as he does his being a black man. It’s a trope now, that the bigoted cop’s saving grace is his adherence to the law, but Steiger avoids caricature. He lives in Gillespie’s skin and isn’t afraid of his bad parts. Likewise, Poitier continues to evolve his own screen presence to keep Tibbs human and not a symbol. He’s the smartest man in the room, but too smart for his own good. 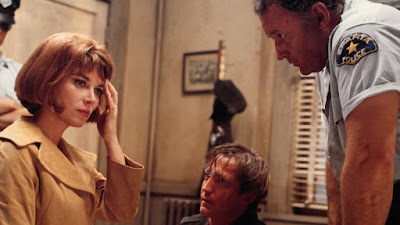 Indeed, the knotted personal drama of the small town is its own education for Tibbs. The murder is almost secondary to the struggles and gossip that informs Sparta’s day to day. Haskell Wexler (Medium Cool [review]) shoots the locales with a gritty vibrancy, never dressing up the shots, letting the people occupy the space. Even Oates’ shit-grinning cop and the petulant ingénue he peeps on (Quentin Dean) have the room to be people. Not very likeable people, but then really, how many of us are? The awesome Lee Grant (Shampoo [review]) also gets a pretty good turn as the dead man’s wife, a determined woman whose sense of personal justice cuts through the petty squabbles. 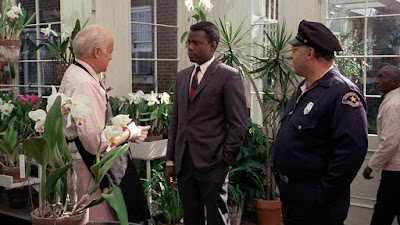 The only performance that moves close to parody is Larry Gates (Invasion of the Body Snatchers) as Endicott, the fat cat who runs Sparta from afar. Endicott is a riff on the mythological Confederate gentlemen, full of privilege and regretting progress. Jewison and writer Stirling Silliphant (The Poseidon Adventure) choose to stage his lone scene in a green house, symbolizing that he is a rare and wilting thing, no longer viable in the open air. This is a cliché we’ve seen before, most notably in Howard Hawks’ The Big Sleep [review]; here it seems an unnecessary and superfluous brush stroke. 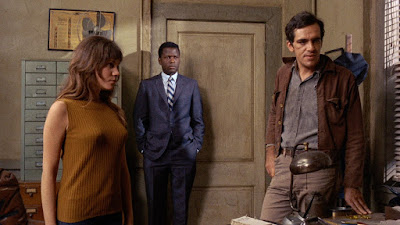 The story of In the Heat of the Night remains every bit as challenging and incisive. The mystery is modern, even if some of the more “scandalous” aspects of it have lost their shock value. You might guess the real bad guy early, but you’ll forget you did amidst all the great character moments that follow. Add to this an ultra cool Quincy Jones score, complete with Ray Charles theme song, and you have a crime classic, its aesthetic perfectly bridging the gap from the squeaky clean studio system and the more grimy 1970s--an in between state that renders In the Heat of the Night truly timeless. 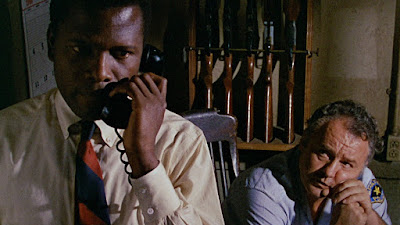