IN A BETTER WORLD - CRITERION CHANNEL 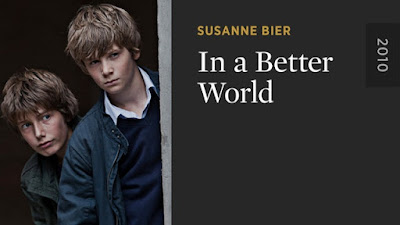 One of the nominees for the 2011 Best Foreign Language Oscar, the Danish film In a Better World is really two movies: In a Better World and In a Crappier World. Though really, the better one is only better by comparison to the other, just as the one movie here that is decent can only be described as "better" because its companion is so not very good.

Directed by Susanne Bier and written by Anders Thomas Jensen, the team responsible for the original version of Brothers, In a Better World is a story of two families. Claus (Ulrich Thomsen, Season of the Witch) and Christian (William Jøhnk Nielsen) are a father and son who recently moved back to Denmark from London after Christian’s mother died of cancer. At school, Christian meets Elias (Markus Rygaard), the eldest son of Swedish immigrants. Both of Elias’ parents are doctors, with his mother, Marianne (Trine Dyrholm, The Celebration), working at the local hospital while his father, Anton (Mikael Persbrandt, Everlasting Moments [review]), shuttles back and forth between home and Africa, where he takes care of refugees. Marianne and Anton are having troubles due to infidelity on his part, so even when he’s home, they are apart. 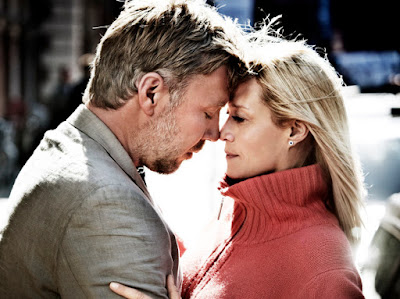 Elias is bullied at school, and by sticking up for him, Christian gets picked on, too. Except Christian fights back, revealing a calculating, nearly sociopathic penchant for revenge. The weaker boy has discovered the wrong kind of role model. In a Better World is a movie about male aggression and the cycle of violence that perpetuates itself through modern culture. When Anton breaks up a fight between his younger son and another boy, the boy’s father (Kim Bodnia, Terribly Happy [review]) slaps Anton for touching his child. Anton backs down, but when he realizes this has caused Elias and Christian to doubt him, he tries to teach them a lesson about standing up for yourself without raising your fists. He may score an intellectual triumph when he confronts the man again, but Christian still thinks he’s a pussy and that a bad guy can only be taken down with his own medicine.

The stuff between the boys is actually pretty good, with both Rygaard and Nielsen turning in excellent performances as the meek supplicant and the angry young man. Theirs is a classic dynamic, and the portrayal of the hold Christian has over his protégé is particularly effective. The family drama that motivates them is not as interesting, but the grown-up world is supposed to be a little boring, that’s why the kids are so baffled by their parents’ behavior. The coming-of-age movie is the good one. The bad one happens whenever In a Better World goes to Africa with Anton. Persbrandt is a strong actor, and his bearish physique and clear blue eyes make for a man of peace who could pose a credible threat if he so desired. His charitable work at the refugee camp is fairly familiar territory, and honestly, was done better on a couple of seasons of ER when Noah Wyle and Goran Visnjic’s characters made regular trips with Doctors Without Borders [review]. Even worse, there is a sanctimonious streak that runs through this portion of the film, particularly as Bier and Jensen try to connect everything back to the burgeoning violence back home. Are we to take away from this that a couple of boys building pipe bombs in the garage are only a few steps away from being brutal warlords, all it takes is their father figures failing them? 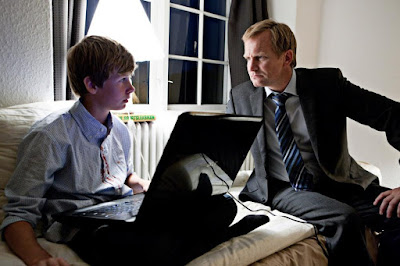 Things take a turn for the worse, both in terms of quality and story, after Christian’s big plan goes wrong. The final portion of the film indulges in the worst kinds of clichés, with obvious script choices leading to easy solutions. A lot of what happens wouldn’t make the cut in even the least credible TV movies. It turns out that all Christian needed was a sturdy hug and a good cry, and the resolution sells what good material there was right down the river. In a Better World needed some careful sewing work to draw everything together, but instead the filmmakers opted to slap bright, garish patches over the plot holes. The final scene and the tranquil nature photography that shows under the closing credits are supposed to make us feel peaceful and pleased with ourselves, but the idyllic glow can’t banish the shadows of disappointment. It just makes us recognize that In a Better World is a clumsily realized fantasy despite its earnest attempts to sell itself as serious drama. 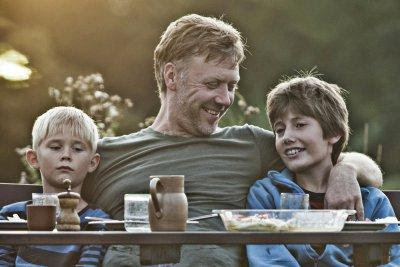