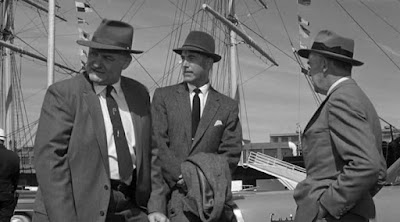 This is the third and final collective review of the Criterion Channel’s bundling of several films under the “Columbia Noir” tag--multiple examples of 1940s and ’50s crime pictures released by the Columbia studio. These films are only on the streaming service through the end of this month, so you’ll want to squeeze the good ones in fast. Here is my first selection, and here my second. 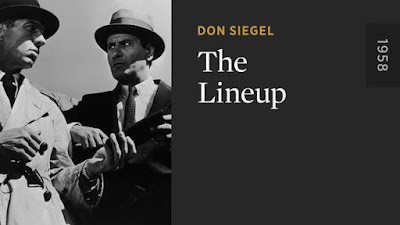 The Lineup: Stirling Silliphant sits behind the typewriter again, just as he did for Columbia on Nightfall in 1957. The Lineup came a year later, and was directed by tough-guy director Don Siegel, known for Riot in Cell Block 11 [review], the 1964 version of The Killers, and perhaps most famously Dirty Harry [review]. Like that Clint Eastwood vehicle, The Lineup takes place in San Francisco. The film is a dual procedural, focusing one side on the cops investigating a drug smuggling scheme, and on the other, the two hired killers collecting the heroin from unsuspecting mules who have had the contraband hidden in their souvenirs from foreign countries. 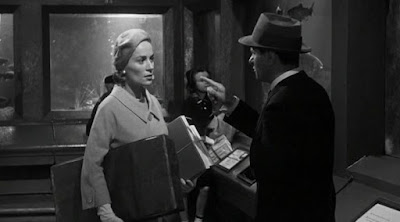 It’s this more salacious side that dominates The Lineup, mostly due to the razor-sharp, unsettling performance by Eli Wallace (The Misfits [review]). He plays Dancer, a cold-blooded fixer with a singular drive. Robert Keith (Written on the Wind [review]) works alongside him as Julian, the mentor and handler for Dancer. Together they thug their way through the Bay Area, picking up the smuggled packages and leaving a trail of dead bodies behind them. Wallach delivers a perfectly modulated performance, lacing Dancer’s precise actions and false pretenses with a callous indifference, the murderous impulse lingering just under the surface. It’s fantastic to watch, both riveting and menacing.

Siegel blends the drama with a more realistic shooting style, making a meal out of the San Francisco locales. This is especially noticeable in The Lineup’s climactic car chase, a crazy high-speed rush through the Presidio and beyond. It’s pretty exciting stuff, and closes the movie on a high note even while delivering the expected “crime doesn’t pay” messaging. 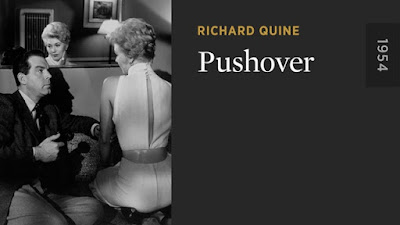 Pushover: Another Richard Quine effort (see previous review of Drive a Crooked Road), 1954’s Pushover begins by pinching its slugline from Double Indemnity, even going so far as to borrow one of its stars, before taking off in its own direction.

Indemnity’s Fred MacMurray shows up in Pushover as Paul Sheridan, a police detective who finds himself taken in by the femme fatale he’s been tasked to case. It’s no wonder, since Lona is played by Kim Novak (Vertigo [review]), here making her screen debut--though at this point more an alluring beauty than a capable actress. Ready to toss all caution and scruples to the wind for Lona, Paul attempts to discombobulate his own stakeout, leading to one colleague ending up dead and the other suspicious. 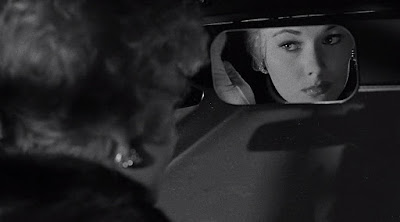 The screenplay by Roy Huggins, the writer behind the TV series The Fugitive, makes clever use of the limited cast and confined locations that a stakeout requires. Three cops: two in an apartment across the way from Lona’s and one in a car down on the street. In addition to Paul, there is Rick (Philip Carey, Mr. Roberts), a straight arrow, and Paddy (Allen Nourse, Odds Against Tomorrow), an older cop with a drinking problem, one step away from retirement but one stumble from losing his pension. Add to this dynamic whatever complications you can think of, but also factor in Rick developing a crush on Lona’s pretty neighbor (Dorothy Malone, perhaps most memorable as the sexy bookseller in The Big Sleep [review]). There are many collision courses of human behavior just waiting to explode. 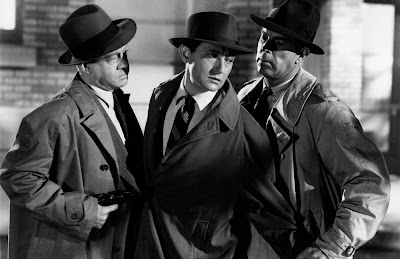 Quine brings all the requisite shadowy cynicism to Pushover. It’s not quite as dark as Double Indemnity, but it’s fueled by a similar disappointment in the social contract. The plot is smart, but the dialogue isn’t very sharp, depriving Pushover of the sort of snappiness that could have nudged it into being a classic. That said, it’s still damn enjoyable, and worth it to see just how far MacMurray’s Paul will go to get the blonde. 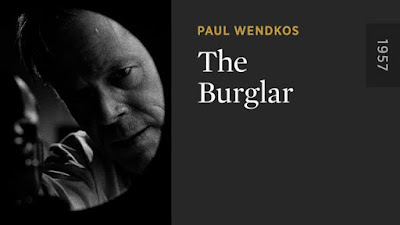 The Burglar:  Though I have no memory of it, turns out I reviewed The Burglar back in 2014 and back then wasn’t impressed by its ragged style the way I was when watching it today. Notes I made during this viewing:

* jumpy editing, keeps a fast pace by cutting out connective tissue
* emotional extremities, psychological framing, the whole film has a feverish impatience spawned both from the pressure of guilt and sexual tension
* Duryea as a sweaty, repressed mess brings it all together. His restraint is juxtaposed by his henchman’s uncontrollable urges. The assault on Jayne Mansfield’s character is rough even now, but especially for 1957
* Police feel like they are in a different movie. The lackadaisical detective has more in common with Steven Geray in Columbia’s So Dark the Night [review]

Some of these thoughts are echoed in the longer piece, and though I’d be inclined to give The Burglar 3 stars instead of 2 nowadays, the rest of what I had to say still rings true. Read it for yourself: 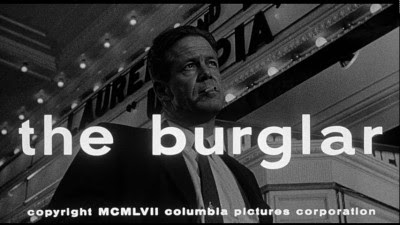 The 1957 film noir The Burglar is the kind of film that I'm almost compelled to embrace and champion as a lost curiosity. Directed by Paul Wendkos, who went on from here to direct a ton of television, and adapted by David Goodis (Dark Passage) from his own novel, The Burglar is a bizarre, almost impressionistic take on the usual small-time heist drama. I say almost, as you'd be hard-pressed to make a case for its disjointed quirks being intentional. When it comes down to it, The Burglar is a bit of a mess.

Dan Duryea leads the low-rent vehicle as Nat, an equally low-rent crook who spies a wealthy woman's jeweled necklace in a newsreel. He and his crew track the lady down, and they send Gladden (Jayne Mansfield) to case her place. Once they know where the necklace is located and the lady's routines, the two other robbers (Peter Capell and Mickey Shaughnessy) stand on lookout while Nat climbs into the second-story window and cracks the woman's bedroom safe. Despite a narrow brush with the cops, the theft comes off. The high-profile target brings the heat, however, and Nat insists they lay low and wait to fence the ice until it's cooled off. 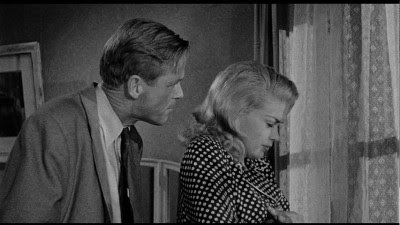 It's a smart plan, but a hard one to execute, particularly as the bad guys all start to go stir crazy rather quickly. Baylock (Capell) is wanted on other charges and is eager to get out of the country; Dohmer (Shaughnessy) is a mouth-breathing dope who can't keep his eyes--or hands--off of Gladden. Nat is protective of the girl, so he sends her away to Atlantic City to wait it out there. She ends up cavorting on the beach in her bikini (because, you know, she's Jayne Mansfield) and hooking up with a new fella (Stewart Bradley). Nat also winds up meeting a new lady, a tough gal on the make (Martha Vickers). As it turns out, neither of these lovers found each other by accident, and Nat and the boys have to race against the clock and dodge police barricades to get to Jersey before the whole plan goes kablooey. 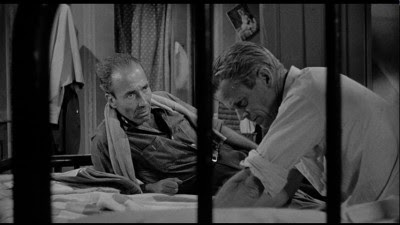 If you think that sounds like a lot of story, well, it's actually kind of not. The Burglar has a rather small plot when it comes down to it, and Wendkos and crew spend a lot of time hanging around, mulling over the minor story points, repeating scenes and arguments until it's time to move on to the next set-up. It's all rather bizarre. Wendkos shares co-editing credit with Herta Horn, who apparently worked on no other movie before or after The Burglar. Together they whack at the narrative with what one would guess is a meat cleaver and gardening shears. The story jumps from scene to scene, often leaving out crucial connective details, though there is cause to wonder if they were ever there to begin with. A few sequences at the flophouse double up on each other, arguments between the batty burglars repeating as if it's the first time any of them had the same thought. Other story elements make little sense. Nat's sudden ability to roam the city, for instance, making it easy for his would-be girlfriend to find him even as the cops seem to have no clue as to where to look, while Baylock and Dohmer remain under house arrest, is an act of narrative convenience with no grounding in reality. 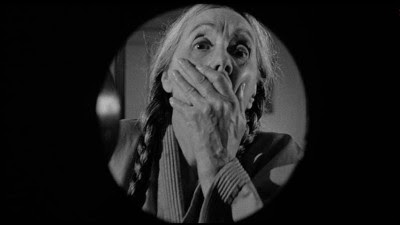 Yet, for as clumsy and ham-fisted as The Burglar can be, there are also daffy bravura moments, particularly in terms of visual approach. Cinematographer Don Malkames has a vivacious, unhinged filming style, developed as the cameraman on multiple musical revues, capturing live R&B and rock-and-roll. He is a master of artfully composed frames, preferring extreme angles and odd points of view. It's often hard to predict where his camera will end up. When Nat sends Gladden away, Malkames shoots from the ceiling, almost as if we were looking at footage from a security camera. In other sequences, he prefers odd perspectives--sitting in the driver's seat inside a car, peering out from the empty safe as the unsuspecting victim paces back and forth, taking a punch directly to the face. While the mis-en-scene doesn't always line up, it almost doesn't matter. Malkames has a command of both the beautiful and the grotesque.

Unfortunately, that's not enough to recommend The Burglar outright. The film was such a creative flop, it reportedly sat on the shelf for two years until Columbia saw an opportunity to capitalize on Mansfield's burgeoning fame. (Pete Kelly's Blues [review] was shot just before The Burglar , and 1957 also saw the release of Will Success Spoil Rock Hunter? and Kiss Them For Me.) Mansfield is certainly beautiful here, though her looks are played down in comparison to the bombshell image that was being cultivated for her. Her acting chops are less impressive. Only Duryea is on point, finding a solid footing for his tough-guy character despite the imbalanced production. By the end, he looks about as confused as the rest of us. 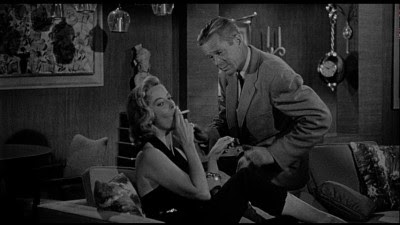