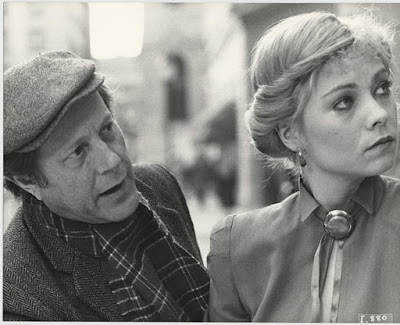 Director Nicolas Roeg passed away yesterday. The filmmaker responsible for such films as Don’t Look Now [review], Insignificance [review], The Man Who Fell to Earth [review], and Walkabout [review] was 90 years old.

As you’ll see reading my previous pieces, Roeg and I did not always get along.  Prior to today, I would have said the only movie of his I enjoyed outright was Performance [review]. Even so, his death seemed like a good time to watch the one film of his in the Criterion Collection I hadn’t yet given a spin, and I’m sure glad I did. Bad Timing surprised me with its vigor and its incisiveness, and it perfectly showcases Nicolas Roeg’s sharp editorial eye. The 1980 feature is maybe his most grounded, but its boundaries create an excellent vehicle for Roeg to fully realize his fascination with fractured narratives. 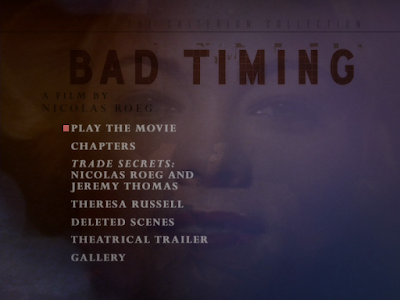 Bad Timing is essentially a love story between two people who are horribly wrong for each other, but the kind of wrong that puts them on a collision course with doomed romance. Theresa Russell plays Milena, the sort of female character that once upon a time would have been dubbed a “free spirit.” This means she acts on every impulse, refusing to be tied down or restrained, less “manic pixie girl” than she is a grown woman demanding her own agency--while potentially being manic. This makes her the perfect sexual fantasy for someone like Dr. Alex Linden (Art Garfunkel), an academic who is drawn to her wildness but wishes to possess it, as well. As I said, they are all wrong. 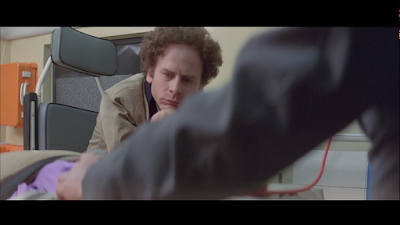 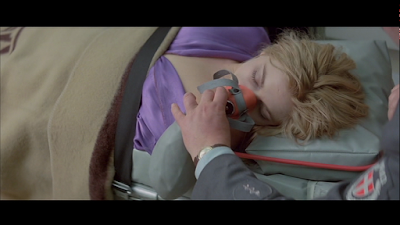 Roeg, shooting from a script by Yale Udoff (Eve of Destruction), opens the movie in Vienna, on the night Milena overdoses, placing us in her ambulance alongside a concerned but strangely cold Alex. But we don’t stay with this present state for long; nor do we stay anywhere for long. Roeg and editor Tony Lawson (Barry Lyndon, Straw Dogs [review]) create a chopped-up but never choppy timeline of Milena and Alex’s relationship, jumping back and forth between the here and now and various points along their dalliance. While the current story progresses in what resembles a linear fashion, the past does not, and as the police get involved in figuring out what happened to bring Milena to the brink of death, they start to invade the memories, entering the scene of the crime, reimagining some of what went down. Harvey Keitel rounds out the main cast as Inspector Netusil, someone whom we can surmise becomes nearly as obsessed with this toxic love affair as the couple living it. We don’t really doubt him as one of the narrators, his intrusion on things he could not know is too brief; rather, he is the catalyst to undo lies and denial. 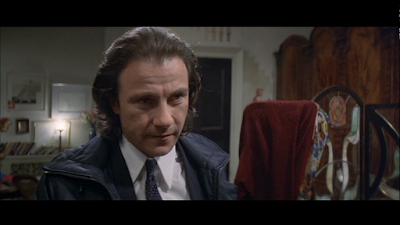 The trope of the ethically compromised professor and the wild child that so intrigues him is not a new one. My suspicion is it largely sticks around as a way for egghead writers to assert that brainiacs can be interesting, too. It can often be a gross paradigm, particularly when it’s a teacher and student, but luckily Roeg and Yudoff avoid that dynamic here (Milena is not a student, in other words). Some of the clichés still persist--particularly Alex’s hesitancy to act, and how that opens him to Milena’s manipulations--but they also sidestep any of the obvious backstory. There is no trauma or abuse that makes Milena behave the way she does; on the contrary, she simply is who she is, and the more we get to know her, the more we realize that despite her self-destructiveness, she is living her most honest life. 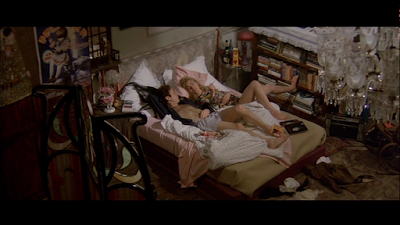 And the more we get to know Alex, the less we believe he is either rational or well meaning. There is a genuine power shift going on over the course of Bad Timing. We go from Milena being the girl who won’t take no for an answer, to Alex being the creep that won’t take no for an answer--and Milena is stuck not knowing what exactly a “yes” would mean. While at the end of the movie it’s clear whose side we should take, for most of Bad Timing, it’s tough to say whose contribution is the most combustible. The lovers share responsibility for the fire, but there is good fuel and there is bad fuel. I’d say our allegiance particularly swings toward the girl on their trip to Casablanca when Alex’s jealousy starts to take on a racist overtone--but then, the filmmakers are also guilty in this scene of making men of color the dangerous “other.” The camera eye offers a different point of view than could strictly be Alex’s, and based on what is shown, how the men are portrayed, it’s clear that the audience is expected to feel a threat, as well.

Which is too bad for a film that otherwise manages to create a rather progressive portrayal of male/female dynamics. I don’t know if Udoff structured his script in the same fashion as made it to the screen, but the decision to turn Bad Timing into a kind of “greatest hits” highlight reel of the relationship’s race to rock bottom means that we don’t get stuck in a standard him/her tennis match. And as the police investigation picks up heat, it lends more urgency to the love affair’s disintegration. Roeg avoids any overly symbolic montage, using camera tricks sparingly to move us from one scene to the next, zooming in on an object and then cutting to another scene, but never relying on a strict one-to-one ratio (for instance, when Alex looks at a pipe leaking steam, we don’t go to a tea pot whistling or the like). The editing is the most suggestive in the more intimate scenes, creating a collage of the lovers’ bodies rather than any strict depiction of sex--except maybe when the looking is intended to make us uncomfortable. The most effective moment, though, is in Alex and Milena’s emotional standoff at the university. Director of photography Anthony Richmond (Legally Blonde) chooses to get tighter and tighter on their faces, while the backgrounds fall out of focus and turn into abstract patterns, reminiscent of the Klimt paintings shown in the opening credits. It’s a simple, yet effective, way to show how these two, when they are truly together, inhabit their own world. 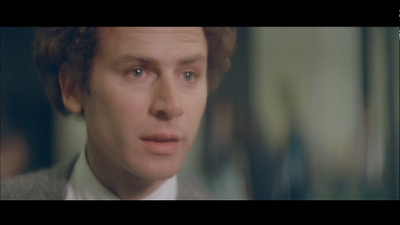 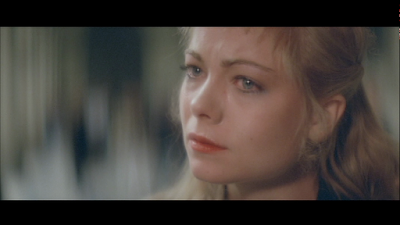 Sad to say here is another spot where Roeg missteps, using a terrible piano instrumental to score the scene. It feels mawkish and out of place. Also, what is up with the on-the-nose employment of the Who’s “Who Are You”--not once, but twice--when Alex is trying to uncover someone’s identity? Is this where the CSI producers got the idea?

Luckily for Roeg, his cast is so talented that they can bring Bad Timing back to Earth from just about anything. Who knew Art Garfunkel, the quiet one in Simon and Garfunkel, could be so focused and not just intense, but menacing? In Carnal Knowledge, he is more a foil to Jack Nicholson than a full presence. Not so in Bad Timing. Garfunkel’s performance isn’t showy, but all the better for it. He needs to stand firm against his co-star’s energetic onslaught. Theresa Russell gives the performance of a lifetime, fully possessing Milena, embracing all her flaws while making sure she’s more than just a collection of foibles and male perceptions. She is alternately sexy, infuriating, inspiring, and sad. Just like we all are. Just like love can be. More importantly, though, is how present and alert she is. For as much as Alex, in his capacity as a “research psychoanalyst,” police witness, and man possessed, is always keeping his eye on her, Milena’s gaze is the one that is laser focused. It feels at times predatory or self-serving, but also protective. Too bad she can’t see what Alex will become...or is that part of the fun for her? 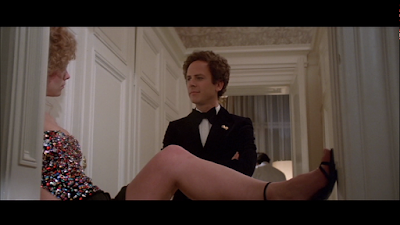 It’s all rather intoxicating. Bad Timing has a lot to sift through, but it never feels that the director is obfuscating for no reason. His feints and sleights of hand are there to intrigue...and to reveal. So, cheers to you, Mr. Roeg. I am glad we could part on such kind words, given our own contentious relationship as storyteller and armchair critic. May you rest in peace, wherever you’ve chosen to go. 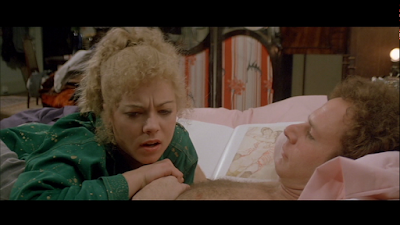