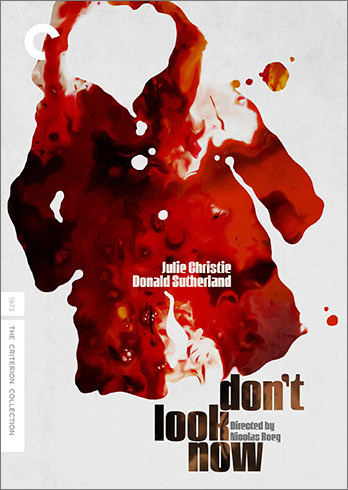 What surprised me the most when the film came to an end was how much I cared about the main characters of Don’t Look Now. In the final moments of Nicolas Roeg’s 1973 supernatural drama, a rapid montage of Donald Sutherland and Julie Christie as the movie’s central couple quickly summarizes all that we have seen over the previous 109 or so minutes, and I was strangely moved. For a movie I didn’t really enjoy, I shouldn’t have had that much of a connection, but turns out, I did.

Credit is likely due to Sutherland and Christie, who excel as John and Laura, a British couple on a working holiday in Venice, where the memory of their recently drowned young daughter haunts them. As far as Laura is concerned, quite literally, too. After a clairvoyant blind woman tells her that she has seen the lost child in their midst, and that the girl is happy, Laura is both freed of her grief and newly obsessed with the loss. John, on the other hand, is weighed down further by this revelation--both from worrying over his wife’s alleged delusions and the warning from the psychic that Venice will harm him somehow. 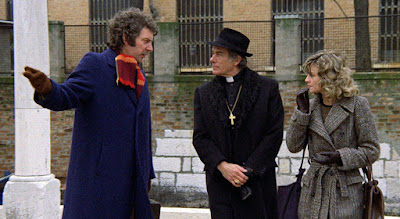 And so it is that eventually we realize that this is a couple who is not really together, but moving in separate directions, divided by emotions that should otherwise bind them. Tragedy can have this effect, though. Grief is personal, and though the husband and wife are processing the same events, they do so from two different vantage points. John literally pulled his daughter’s body from the water, while Laura only witnessed the aftermath. And though they both wonder “what if?” in relation to their kids going out to play that day, John has the added regret of being the one who encouraged them to venture outside. Thus, it’s even more resonant when they hear of their young son having an accident back at school in England, which serves to pull them further apart, both literally and figuratively, and kick off Don’t Look Now’s final movement. 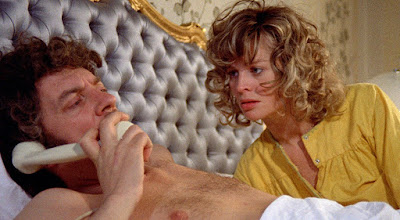 Roeg’s nimble visual touch serves him well here. The swift cutting he and editor Graeme Clifford (McCabe & Mrs. Miller [review]) employ to toggle between the two characters, as well as past and present, serves to keep the viewer disoriented, often almost like we are opening and closing one eye at a time, back and forth, getting two skewed versions of the same picture. Sutherland flourishes in this oddness, his congested delivery transforming his character’s sadness into a kind of wet, physical symptom he can’t dislodge. He is a man trapped in a narrative he can’t seize control of--which is ironic, since we are led to believe he is a little psychic, too, but yet he can’t sense his own impending doom. 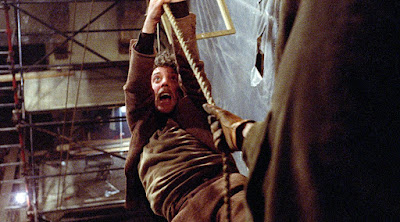 Don’t Look Now is based on a story by Daphne Du Maurier, a favorite of Hitchcock, whose Rebecca [review], Jamaica Inn, and The Birds all draw from her source material. Unlike Hitchcock, though, Roeg doesn’t manage to extract much suspense out of the writer’s tale. Even as Roeg uses the criss-crossing Venice canals and roadways to get John lost, he doesn’t manage to create much sense of peril. I can’t believe I am saying this, but I actually wonder how much better Brian De Palma might have handled Allan Scott and Chris Bryant’s script. The mistaken-identity ending could only be more De Palma-esque if either Sutherland or Christie woke up in bed, having dreamt the whole thing. (Note: Composer Pino Donaggio also scored De Palma’s Dressed to Kill [review] and Blow Out, but his work here is often too erudite, and tends to detract rather than add, most notably the cheesy classicisms of orchestration during the infamous sex scene. Despite all the visible flesh, one must assume that Donaggio and Roeg don’t want us to find it even remotely erotic.)


Perhaps, though, I am looking at this all wrong, and not examining how Don’t Look Now appropriates the cumulative effects of grief. If we go back to my opening statement, despite not being particularly engrossed or engaged, I still somehow found myself having an emotional reaction at the finish, one of sadness and pity for a couple I had come to...not really identify with or like, but get used to? In his own weird way, Roeg managed my experience, massaging my sentiments, and got me exactly where he needed me to be. Now the question becomes whether I’ve become attached enough to want to revisit John and Laura and see if, knowing what I know now, feeling what I feel, Don’t Look Now plays any differently. It’s not something I’m compelled to do immediately, but maybe one day.... 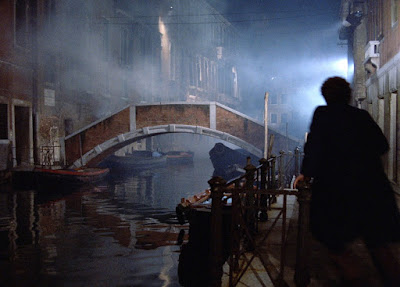