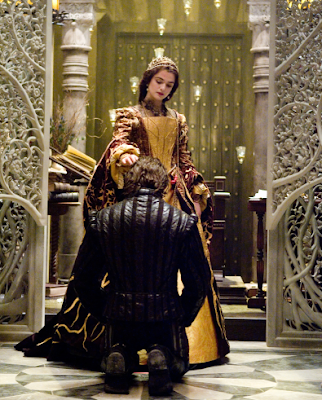 Darren Aronofsky's The Fountain was barely a blip in theatres during its release last year. A willfully challenging art-house picture with the shine and substance of a sci-fi brainteaser, it was a conundrum to some, a yawner to others, and a revelation to many. It's the kind of movie that was made to be debated and argued over, defended and loathed in equal measures.

I missed it at my Cineplex, instead catching it on a transatlantic flight. Not exactly the most ideal of situations to watch a film, particularly one as beautifully shot as The Fountain, but even viewing it on a tiny picture screen on the back of someone else's chair could not dull Aronofsky's fervor. I was instantly enthralled, joining the "loved it" camp without reservation. This was a surprise to me, because I wasn't necessarily predisposed to like it, having mixed feelings about both of Aronofsky's previous efforts, Pi and Requiem for a Dream. It was as if I had been sleeping, unwilling to believe, and The Fountain struck me both intellectually and emotionally, hitting with the force of an awakening slap. The Fountain is a passionate movie, and it moves with the inconstant waves of human feeling. For as much as it tickles the philosophical centers of the viewer's brain, if you try to intellectualize it too much, you'll lose it. You just have to let it happen and accept the irrational flow.  The Fountain is about grief, about life and death, about sacrifice and the act of creation through reduction. Don't try to force the pieces together; the movie will assemble the puzzle for you.

Darren Aronofsky's script, written from a story conceived with Ari Handel, runs on three separate but intersecting timelines. The main line is in the present, where Dr. Tommy Creo (Hugh Jackman) is searching for a cure for cancer. He is driven and obsessed, determined to outrun the tumors that threaten to take his beloved wife away from him. For her part, Izzy (Rachel Weisz), indulges his dream. She yearns to spend more time with her husband, but she understands his compulsion. As a writer, she is trying to solve her own riddles about death. Her work-in-progress is a book called The Fountain, a period piece about a Spanish conquistador named Tomas (Jackman, again) searching for a Mayan temple believed to hold the Tree of Life from the Garden of Eden, which is, essentially, the Fountain of Youth. Tomas was sent on the mission by Queen Isabela (Weisz), who seeks eternal life for herself and her kingdom. Adding a perilous deadline to Tomas' expedition is the Inquisitor (Stephen McHattie, 300 [review]), a power-mad zealot who is spreading through Spanish society like the cancer that attacks Izzy. He'd have Isabela killed if it meant taking the throne himself.

We see the Spanish storyline played out as Tommy reads the manuscript, its narrative intertwining with his scientific mission. Izzy explains to him the various Mayan creation and afterlife myths she's uncovered in her research, and it inspires Tommy to seek different techniques. All the while, the third timeline, the future, runs its own course over the top of both of the other stories. This story is the most open to debate, possibly being another part of the book, but also possibly more connected to Tommy's consciousness.

In this future, Jackman plays a monastic caretaker for a tree that grows at the center of a star, its similarity to both the Tree of Life and the star that the Mayan's believe houses their souls after they die being immediately apparent. From where I sit, this symbolic plotline is a manifestation of Tommy's thoughts, of his inspiration and his guilt. The answers he seeks (and make no mistake, the questions change, it's not as simple as all that) lie in somehow connecting this future story to the rest, steering the star to the Mayan temple and Izzy's hospital bed and not necessarily halting death, but at least finding some kind of understanding.

A synopsis of The Fountain reads like a recipe for something pretentious and self-important. In Aronofsky's kitchen, the movie is a delicate soufflé. All it would take is a loud rejection from his viewer to make it collapse on itself. Note that I put the survival of the picture in the audience's hands. It's because I think the director has given us all the pieces, all of the information we need to connect everything in his tale. He's perfectly in control of a rather unwieldy narrative, and he gingerly leads his audience from one element to the next. He makes the interweaving of the three lines apparent through repetition of events and dialogue, but he also uses visual rhymes to add resonance. For instance, as both Tommy and Tomas head off on their quest to save their beloved, they enter the shot upside down and exit right-side up, or the hairs on the back of Izzy's neck resemble the living filaments on the tree within the star; there is also similar framing used on the various characters, recurring images of rings and spheres, and design motifs that echo, such as the Mayan dagger and the screen in front of Isabela, brain scans and nebula patterns, and the jewelry worn by Isabela and Izzy.

The art direction in The Fountain is meticulously gorgeous. Aronofsky insisted on hand-crafted, live effects wherever possible, and the end product is more lush than any big-budget CGI-fest. More important than the visual details, though, is the heart that pumps the blood through this picture. Aronofsky never loses sight of the emotional impact that keeps The Fountain from being just an empty mind-bender that's more satisfying to look at than it is to watch. Here is where casting is oh so important. Hugh Jackman had already had a hell of a year with a comedic performance in Scoop [review] and playing the conflicted hero (villain?) in The Prestige [review], and his turn as the lead in The Fountain adds an even greater mark to his resume. He's never had so much passion onscreen, and as bright as his fire burns when he chases the various relics of his quest, the explosion of despair that follows tears everything down and razes the emotional landscape. You'd be forgiven for thinking that nothing more can grow there, but Aronofsky and Jackman still have a few surprises up their sleeves.

Of course, no obsession is complete without its central, driving object, and Weisz is resplendent as the muse. Izzy/Isabel is the less showy role. As much as she is the inspiration that pushes the explorers to action, she is also the finish line. She already knows what they will find, and she is required to provide both sympathy and encouragement even as she disintegrates. Rachel Weisz is more than emotionally able as an actress, and I have no trouble buying that she could be the catalyst for world-spanning expeditions and sleepless nights in search of salvation.

Needless to say, I loved The Fountain. Every defiant, arty minute of it. It took about six years for Aronofsky to bring the film to life, and even the crushing blow of one production being shut down just as it was getting started couldn't stop him. Just like the character in his script, he wasn't going to let anything prevent him from pursuing his journey all the way to the end. I'd say I'd like to know how that felt, what kind of buzz he achieved by fulfilling that dream, but it's all right here  in the final scenes of the movie. The rush of innovation, the joy of understanding, the contentment of spiritual nirvana--author and creation are, for once, occupying the same space. Tommy's fictional discovery is Aronofsky's artistic discovery playing on an endless loop, growing exponentially with each play, like a chain reaction of supernovas. Like the Fountain the characters all seek, The Fountain is Aronofsky's source of eternal life--a motion picture that will endure.

Hi Rich.
I'm not here to troll.
I saw The Fountain upon it's release.
Didn't like it.
My biggest observation is that I didn't feel emotionally invested in Izzy's cancer story.
Tommy,Tomas and Tom I loved.
We as an audience didn't feel connected to the couple's race for time.
Often the set pueces felt discounted.
There wasn't enough exposition between this couple.
I didn't believe for a nano second
their love was geniune it felt more desperate than unconditional.
It's the same way I felt about Cold Moyntain.
The characters just collide into
one another.
The visuals we're breathtaking.
The Tomas scenes with Tomas we're my fav.
Those scenes with Tomas we're very exciting.
Anyway.
The production for the Fountain was
doomed.
Brad Pitt & Cate Blanchette we're the irugiori players.
Pitt dropped out.
Then Aronofsky didnt get final cut.
And here's revenge for you...
The graphic novel for the The Fountain is the ULTIMATE DIRECTORS
CUT.
The book was written by Aronofsky.
And illustrated by Kent Williams...each panel painted by hand.
This book is the culimation of some
years in the making.
The movie wasn't for me but there are fans out there who fully embraced
the original theatrical cut but if you found you weren't happy with the film go hunt down the graphic novel
(Verigo imprint)every panel is lovingly rendered and the dialogue
improved upon from the original script.