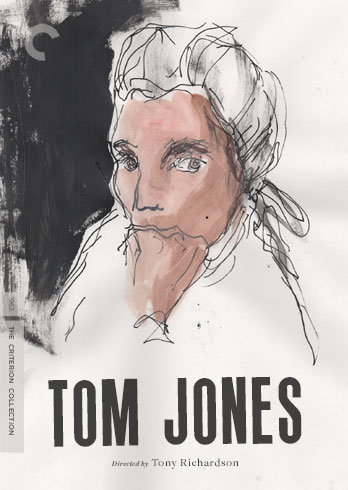 Released in 1973, the film adaptation of Henry Fielding’s Tom Jones is a ribald comedy of social standing. A decidedly British tale, it has a touch of farce, and a little post-modern cheek. Directed by Tony Richardson (A Taste of Honey [review]) from a script by John Osborne--who also wrote the Richardson-helmed Look Back In Anger--the film today appears to be an advance scout for cinema to come. Its raucous, profane humor tested boundaries of decorum, presenting sex as a fun activity indulged in by anyone but the notoriously dull.

Albert Finney stars as the titular Jones, a child abandoned to a rich landowner (George Devine) that raises the boy as his own. Social mores being what they were, most of the aristocrat’s noble neighbors looked down on the decision, believing a bastard child to be predestined for trouble. 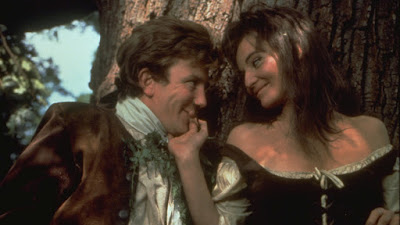 And they weren’t half wrong. The grown-up Tom Jones is a rulebreaker and a scoundrel, but good-natured in his bad activity. He loves women, including the farm girl Molly (Diane Cilento, The Wicker Man [review]). Who Tom really has his heart set on, though, is Sophie (Susannah York, Tunes of Glory), beautiful daughter of the wealthy Squire Western (Hugh Griffith, The Canterbury Tales [review]). Despite enjoying Tom’s lively company himself, the Squire sees different things for his daughter, and when he is sucked into a scheme led by Tom’s dull adopted brother Bilfil (David Warner, Time Bandits), the old man manages to get Tom banished. At the same time, Sophie has run away, and the two would-be lovers make their way into the world separately at the same time.

Tom’s adventures, of course, lead him to trouble. He tussles with drunk soldiers, sleeps with lusty wives, and ultimately ends up in London, where he eventually meets his greatest match (Joan Greenwood, The Importance of Being Earnest [review]) and his greatest misfortune--that is, before things are set right again. 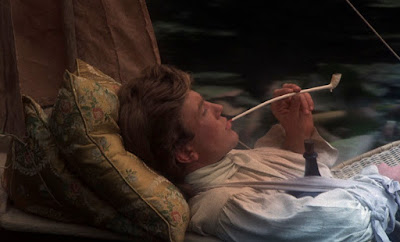 Tom Jones is frank and honest about the debauchery within its narrative, even as it informs the viewer that the camera is going to shy away from showing what a man and a woman might get up to, tweaking the nose of the censors, cutting the shot just as the getting is good. Of course, as with a horror movie that keeps its frights out of frame, such diversions only stoke the imagination--and makes the filmmakers more clever. Tom Jones’ most famous scene is between Finney and Joyce Redman (Olivier’s Othello) where the pair seduce each other by lustily devouring a multi-course dinner, the foley artists working overtime to record every crunch and slurp. In more a more lax era, they would have ruined it by jumping to the dirty deed itself, but here, it’s all about the unbroken gaze of the two ravenous lovers. 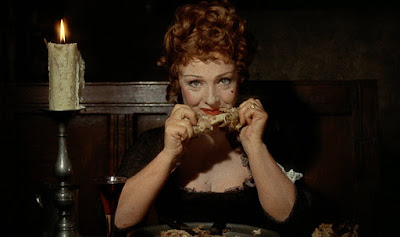 Richardson imbues Tom Jones with a playful visual style, including sped-up sequences that are pure British camp, a bit Benny Hill, a bit Carry On, dressed in trappings from the silent era. His quick cutting keeps pace with Finney’s full-steam-ahead performance, and both Finney and eventually Redman are allowed quick glances to the camera, a bit of a wink to make sure that the audience is in on the joke.

That said, Tom Jones also feels a little shaggy. Its farcical elements aren’t nearly as energized as one would hope, and its transgressions are no longer as naughty as they probably once seemed. It’s a fun affair, but also kind of unremarkable, carried mostly by Finney’s never wavering commitment.
For this new edition, Criterion is offering a marvelous restoration of the film, working from a 4K master. The movie comes on two discs, one featuring the original 1963 theatrical version, and the other housing Richardson’s 1989 director’s cut. Surprisingly, for once, the director’s cut is actually shorter than the original. Longtime fans might notice the nips and tucks here and there that removed about seven minutes from the running time, but the casual viewer would be hard-pressed to notice. I’d recommend first-timers following Richardson’s lead and watching his final version. 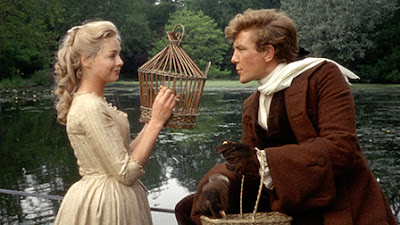