THE HARDER THEY FALL - CRITERION CHANNEL

Setting things right, and watching the intended companion in a double-feature with John Huston’s The Misfits [review here, and a part II piece here]. 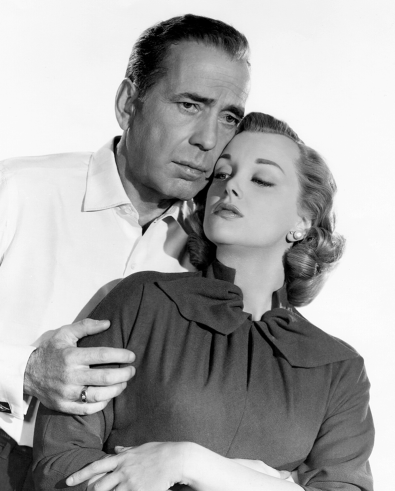 And honestly, I am ashamed of myself for waiting this long to watch Humphrey Bogart’s last picture. Released in 1956, The Harder They Fall features an aging Bogie at his most tenacious, a stand-up guy trying to get through by doing a little wrong. It’s both a tad too late to be classified as a sports-themed noir a la The Set-Up, and a little too early to stand as a symbol of old Hollywood trying to get its licks in with the new generation. Imagine this same movie in the mid-1960s, featuring Bogart tussling with a heavyweight from that era, someone like Jack Nicholson or Dustin Hoffman in the Rod Steiger gangster role, and it would be the classic studio man tearing into the avant garde. This role could have been as iconic for Bogart as a punctuation of a time as Orson Welles’ turn in Touch of Evil [review]. 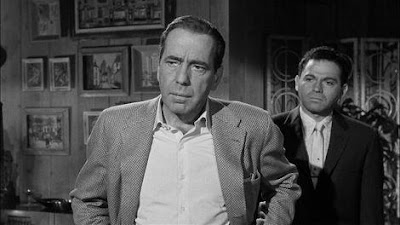 In The Harder They Fall, Bogie plays Eddie Willis, a sports writer who finds himself out of work following the folding of the newspaper where he wrote for nearly two decades. Realizing that the job kept him fed but never gave him enough to start a savings, he throws in with crooked fight promoter Nick Benko (Steiger, Jubal [review]), hoping to earn enough green to never be in this position again. Benko has a South American giant he wants to turn into a North American star, but El Toro (Mike Lane) can neither throw nor take a punch. Only Eddie knows how to work the press to turn this loser into a champion, getting his old pals on the circuit to look the other way when things are dodgy and ignore that the fix is in. 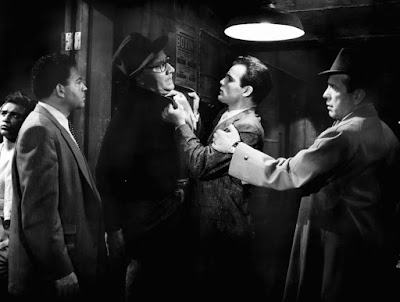 What follows is a long tour of sell-outs, compromises, and lies, as Eddie tries to keep the whole enterprise from going belly up by Toro either finding out the truth about the cheat or getting beaten to a pulp. The audience and some of Eddie’s friends--a television reporter he had a falling out with (Harold J. Stone, Spartacus) and Eddie’s wife (Jan Sterling, Ace in the Hole [review])--see Eddie’s willful ignorance for what it is, even as he doubles-down at every obvious cue to get out. He has to believe that somehow Toro will get his payday, or Eddie will never get his.

The Harder They Fall is directed by Mark Robson (Bedlam [review], The Valley of the Dolls [review]), working from a script by Philip Yordan (God’s Little Acre [review]), who in turn is adapting a novel by Budd Schulberg (On the Waterfront). It’s a slick picture, its swift pace held together by a tightly constructed script. The dialogue is terse and the viewpoint resolute in its cynicism. You’re going to really hate the bad guys, more so when they appear so spineless next to Eddie. As a narrative, The Harder They Fall is scrappy studio system efficiency, pulling off ten rounds of drama without ever hitting the canvas. 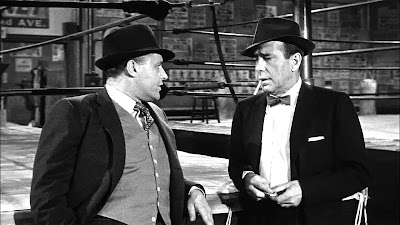 Robson treats all the boxing matches as important, be it a quick done-in-one where the chump goes down easy or the finale where Toro has to tussle for real with the champ. In that climactic bout, the camera deftly moves in and out of the ring, giving us both the fighter’s POV and that of the audience. The latter’s pained expressions makes the beating seem all the more harsh. The most brutal match, however, is an earlier exhibition where a particularly proud pugilist (Abel Fernandez, TV’s The Untouchables) has to be given a bloody out. Try not to cringe waiting for Toro to hit the right mark.

Eddie is on par with some of Bogart’s most famous roles--the last good man amongst a whole lot of bad ones. Like Sam Spade or Philip Marlowe, he has a moral code that he should not deviate from lest there be consequences. Unlike them, Eddie has thrown that code out, and his arc is all about getting it back. The older actor mines a weariness that serves him well, making it as if Eddie somehow knows he is the last of his kind. When he goes down, all else will follow. Eddie’s relationship with Toro is a bit like a citified Of Mice and Men, with the simple giant never quite grasping how things work. The tragedy here is that he is very nearly self-euthanizing, taking Eddie’s advice that the only way out is by taking it on the chin--again and again and again. 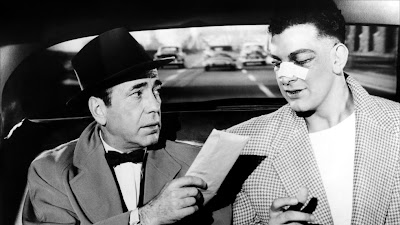 The Harder They Fall is a fitting finish for Bogart. While, sure, he could have done something more grand or obvious before the final bow, it makes more sense to see him go out as he started: playing the toughest guy in the room. Even the very last scene, when he sits down to write, a flipside to In a Lonely Place [review], there is a statement of intent: Bogie will never give in, he’ll always be Bogie. It would have been interesting to see him punch into the next decade. Imagine his collaborations with Godard, or playing an elderly heavy in a Coppola movie. The old hound dog would have certainly taught the young pups a thing or two about a thing or two. 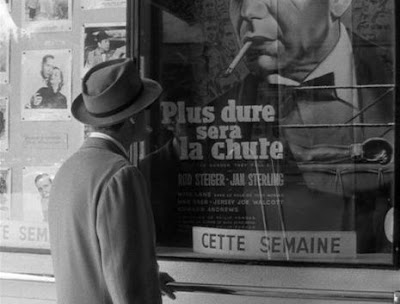 Jean-Paul Belmondo looking at a The Harder They Fall poster in Breathless.