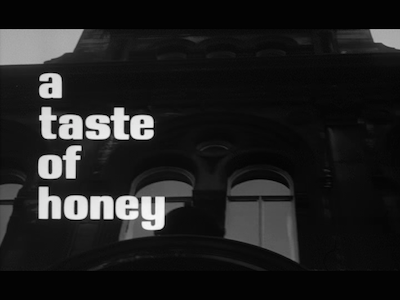 “I dreamt about you last night, and I fell out of bed twice....”

As most fans of the Smiths know, it’s both. Though, those with a big nose who know, know that the lyricist ripped it from the playwright, just as Moz lifted much from Delaney’s texts and nodded to her often. The above lyric is from A Taste of Honey and was embedded in the early Smiths track “Reel Around the Fountain;”  another song from the same period, “This Night Has Opened My Eyes,” not only borrows more lines from Honey, but the plot as well. Morrissey makes no secret of this. On the contrary, his sampling from Delaney, as well as putting her picture on album and singles covers (Louder than Bombs and “Girlfriend in a Coma”) helped drive many a dark youngster to her work. I read the original A Taste of Honey stageplay in high school, and finally found the film version many years later. The vocabulary theft made me predisposed to be a fan. 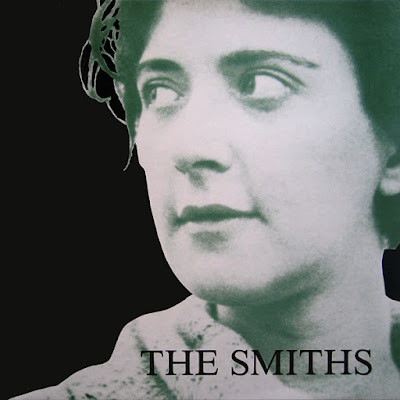 Shelagh Delaney on "Girlfriend in a Coma" 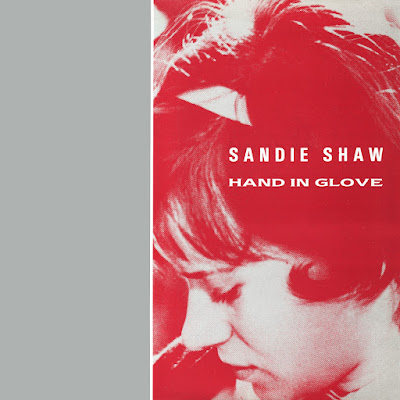 The movie adaptation of A Taste of Honey was released in 1961. Directed by Tony Richardson, it is considered part of Britain’s “kitchen sink” movement, so named not because the filmmakers in that school threw “everything but...” into their cinema, but rather they showed us how folks lived, kitchen sinks and all. Examining the working class citizens as they struggled to get by and potentially change their lives, Criterion fans can see the storytelling style in films as different as This Sporting Life [review], Billy Liar [review], and Victim [review], or even later, we can see how it influenced Ken Loach (Kes [review]) and Mike Leigh. 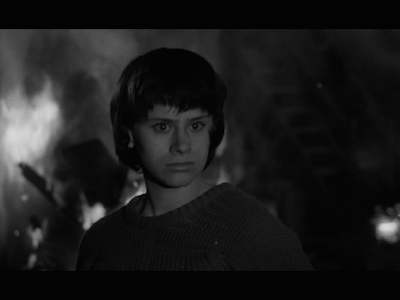 One hallmark of the kitchen sink films was the appearance of the angry young man (Harris in This Sporting Life, McDowell in If.... [review]--both in films by Lindsay Anderson, whom Shelagh Delaney collaborated with on The White Bus [review]). This makes A Taste of Honey a bit of a stylistic revolutionary, as its protagonist is an angry young woman. Starring Rita Tushingham (Doctor Zhivago, Girl with Green Eyes), A Taste of Honey tells the story of Jo, a teenager frustrated with her life of squalor and limited prospects. Jo lives alone with her mother, Helen (Dora Bryan), a woman with many lovers but never two shillings to rub together. This means the pair moves a lot, running out on one landlord after another. They also squabble constantly, tearing one another down, breaking up and making up because, begrudgingly, they are all they’ve really got.

This changes when Helen meets Peter (Robert Stephens) and decides to remarry. Though Jo is reluctant to finally let go of the apron strings, Peter is a much younger man than his new bride and not interested in having a grown daughter. So, Jo moves out on her own, getting a job in a shoe shop and a new roommate of her own. Also, she’s gotten pregnant by a sailor who has since left to sail the seas. 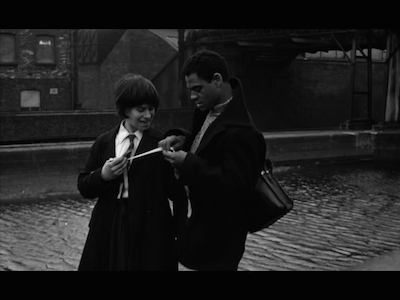 An unmarried teenager having a child all by her lonesome would have been social scandal enough, but Delaney--who co-wrote the screenplay with Richardson--was a progressive writer whose vision took in all aspects of life in urban Manchester. Jo’s lover, Jimmy (Paul Danquah), is a black man, and her roommate, Geoffrey (Murray Melvin), is gay. These facts are both approached delicately. No one comments on Jimmy and Jo being together, but the color of his skin is a factor in Jo’s anxiety about the impending birth. For instance, should she even want to take Geoffrey up on his offer to marry, people will know he’s not the father when they see the child. That’s if the gossips and wags buy their relationship to begin with. Though no one but Jo ever confronts Geoffrey outright about his sexuality, everyone looks at him sideways. They all sense the truth.

Which is always fascinating to see in an older film, since anyone with parents and grandparents born in “the good old days” knows that some members of those generations often tend to pretend that gays and lesbians weren’t around until that demonic disco music magically spawned them. But that’s what art is for--and history books--to show us what many would rather we not see. There’s a reason A Taste of Honey opens with a censorship board certificate indicating it’s only suitable for viewers over the age of 16. Much of the dialogue is frank about things that just weren’t acceptable: sex out of wedlock, abortion, alcoholism. Yet, Delaney avoids pushing a message. She and Richardson just want to show life as they’ve witnessed it and let the audience empathize or reject on their own. 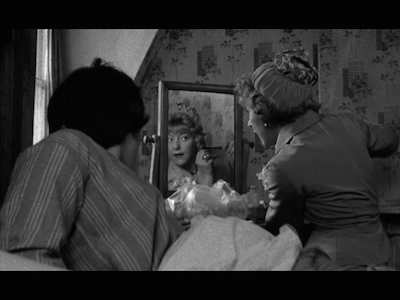 Though Tony Richardson’s generation of filmmakers is often referred to as the British New Wave, their early work has little of the experimentalism inherent in the movies of their French contemporaries laboring under the same name. Rather, the Brits had more in common with the Italians in that realism was more important than style. Hence the director and his cinematographer Walter Lassally (who went on to shoot many of James Ivory’s lesser pictures) filming in the streets of Manchester, inside real apartments, and walking the boardwalk by the seaside. This was an existence that could not be re-created in a studio without adding a touch of glitz, so better to go where it was actually happening. The excursions out into public have an air of documentary, including a trip to the country where the child-like Geoffrey and Jo frolic with elementary school-aged kids. The mountainside expanse emphasizes how small they really are in the grand scheme of the universe (“I’m not happy and I’m not sad”), and the company they keep exposes just how young they are, too. Neither is really in a place where they should be having kids of their own. 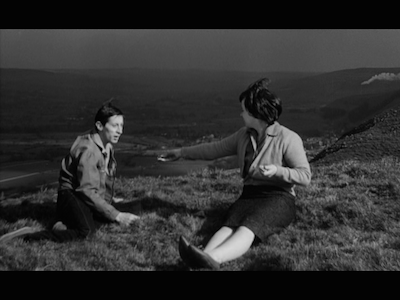 It’s a great sequence, actually, with Geoffrey trying to prove he can be the husband and father Jo needs by awkwardly kissing her. The “traditional” roles are reversed with these two. Geoffrey probably feels too much, while Jo doesn’t quite know how to access all that is going on in her head and her heart. Back at their flat, Geoffrey cooks and cleans, while Jo goes out and earns a wage. One assumes it will all go wrong for these two, that somehow tragedy awaits, but A Taste of Honey sidesteps our expectations. Sure, it ends on a down beat, and everything isn’t necessarily okay, but we do leave with the sense that it will be. Lessons are being learned, and these characters will all carry on and get along in some fashion. Some ties bind so tightly, they will never be broken. 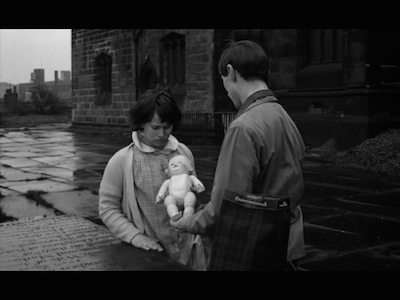 Criterion’s new restoration is, I believe, the first time A Taste of Honey has been available on disc in the States. The image quality is remarkable: crisp and clear, with strong blacks and an excellent level of detail. Supplements include interviews old and new, including vintage clips with Richardson and Delaney, and new chats with Rita Tushingham and Murray Melvin.

We also get a 1956 short film collaboration between Richardson and Lassally, co-directed by Karel Reisz (The French Lieutenant’s Woman). Made as part of the Free Cinema Collective that Richardson and Reisz formed with Lindsay Anderson, Mama Don’t Allow is a 22-minute documentary that displays the realist roots that Richardson and Co. grew from. Set inside and outside a jazz bar, with cutaways to some of the attendees preparing for an evening on the town, it’s a simple portrait of a particular nightlife. With a live soundtrack by the Chris Barber Jazz Band, including Lonnie Donegan, a.k.a. the King of Skiffle, a successful British rock musician that influenced the Beatles, Mama Don’t Allow is a winning snapshot of a specific scene, giving us a look at music and youth culture before the advent of rock ’n’ roll.

The screengrabs here are from an earlier DVD given away free with the Sunday Telegraph fifteen years ago and not from the Criterion Blu-ray.