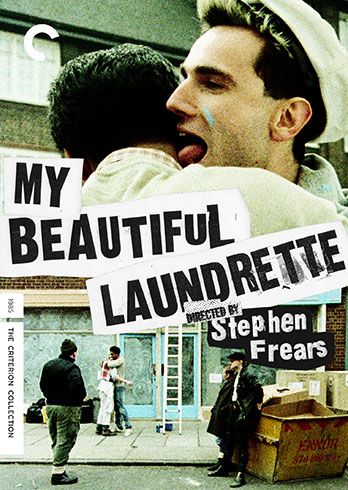 I pulled My Beautiful Laundrette off the shelf for two reasons. One, it’s directed by Stephen Frears, and it would make a nice companion to my reposting of my review of his 2009 effort Chéri. Second, I saw Paul Thomas Anderson’s Phantom Thread last week, and Daniel Day-Lewis’ intense performance was so quietly astonishing, it made me want to look back and see what he was like as a younger man. This is my first time viewing the 1985 film, despite being aware of its reputation and also having been a fan of other work by both the director and his performer.

It was a misguided adventure.

Honestly, I’m not sure why My Beautiful Laundrette was so critically lauded back in the day. My guess is the progressive subject matter being unlike anything else in the cinema at the time, and also because even in this small indie, Daniel Day-Lewis still stands out. 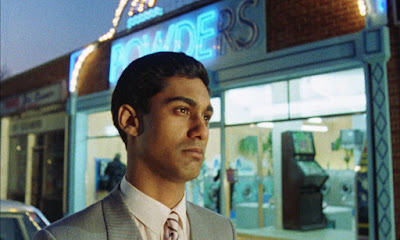 My Beautiful Laundrette is a British drama set in a poor London neighborhood where a family of Pakistani immigrants have set up several small businesses. One of the younger family members, Omar (Gordon Warnecke), is trying to get out of the house so he can escape a father (Roshan Seth, Gandhi) paralyzed by grief. To do this, he enlists the help of an uncle (Saeed Jaffrey, Hullabaloo Over Georgie and Bonnie’s Pictures) who is willing to give him a job. After Omar proves his worth, the uncle gives him a rundown laundry to run.

Being back in the ’hood, Omar runs into Johnny (Day-Lewis), a friend from high school who now runs with a tough crowd. Omar enlists Johnny to help him out, hatching a plan to skim drugs from Omar’s gangster uncle (Derrick Branche) and use the profits to fix up the laundromat. In the midst of these shenanigans, Omar and Johnny also give oxygen to a long smoldering physical romance between them--a relationship Johnny has to hide from his thuggish friends and Omar has to conceal from his family, who want to arrange a union with a nice girl. 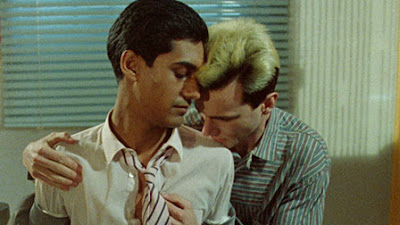 There is interesting stuff here, but screenwriter Hanif Kureishi (Buddha of Suburbia) mostly dances around it. Part of the narrative is that both boys are in denial about certain things, and so it takes a while to learn that they stopped hanging out in their younger days because Johnny became a skinhead--a great character detail--but rather than that revelation leading to an outpouring of emotion or delving into what that meant then and what it means now, why the boy changed, it’s mostly glossed over. Likewise, the full implications of their relationship is never really explored, Kureishi and Frears resorting to the old cliché of an interruption of violence bringing the two together.

Perhaps more disconcerting than the thin writing, however, is Frears trying to disguise amateurish filmmaking and adolescent impulses as quirky style. From the broad character comedy to the cartoonish music and sound effects, the filmmaker tries to imbue My Beautiful Laundrette with an off-center sensibility, but it never quite works. Stage this same story as a grimy kitchen sink drama, shot on the same locations with the same shoestring budget, and you may have a rather challenging story of sexuality and race. Instead, My Beautiful Laundrette is a goofy culture clash send-up without much genuine wit. 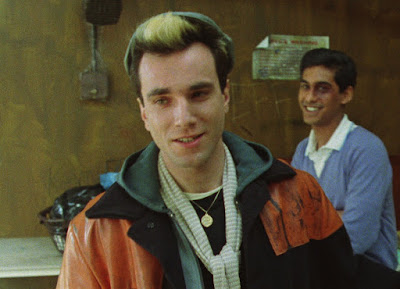 This isn’t helped by the mostly inexperiencde cast. They are all game, but few have the actual chops. Seth and Jaffrey are both confident older performers, but they appear to be in different movies--one is working for Merchant Ivory, the other auditioning for a sitcom. And then there’s Daniel Day-Lewis. His unwavering commitment to character, not to mention his shock of bleach-blonde hair, causes him to stand out in every scene. He’s on a whole other plane than his castmates. It’s as if he is the one adult at a children’s birthday party, and he’s too busy thinking about death to clown around with the kiddies.


Again, I assume My Beautiful Laundrette felt bold and fresh when it was released, a sideways critique of Thatcher’s England that was frank about immigrant issues and homosexuality, but the intervening decades have not been kind. What was once sincere now seems naïve, and what had been deep insight just appears shallow. 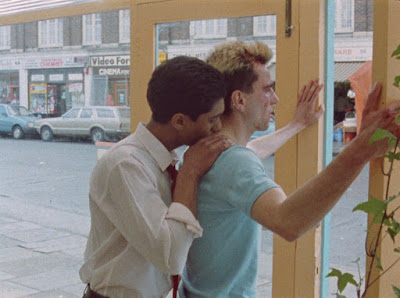 A straight, white American man evaluating this film as if he's got some special insights that needed to be shared is rather mystifying.

Indeed. This is a clueless, terrible review of a great movie.