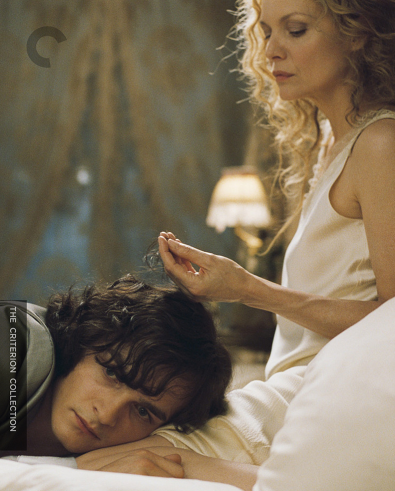 Chéri opens with a jocular recounting of the history of courtesans, using a slick presentation to detail some of the more famous kept women of history complete with vintage photographs and Toulouse Lautrec artwork. It's a fun sequence, lively and full of cheeky humor. Director Stephen Frears supplies his own voiceover, and he sets the stage for the last lady of the evening on the list, Lea de Lonval, as played by Michelle Pfeiifer. It's an entertaining beginning, and it announces a movie that I would really like to see; unfortunately, the movie it announces is not the one that follows.

The basic story of Chéri is that Lea is a high-priced prostitute who is getting on in years, and having just lost her latest long-term client, is finding her prospects have changed. Having earned many a big ticket over the course of her career and, as we learn, invested wisely, she is nowhere near destitute, but the game is changing. Rather than going out and finding a new sugar daddy, she adopts 19-year-old Chéri (Rupert Friend, The Young Victoria [review]), the son of Madame Peloux (Kathy Bates, Titanic [review]), another old whore. Already bored of debauchery, and bereft of an inner life to the point of being soulless, Chéri slips easily into the role of a boy toy kept by a beautiful older lover who takes care of his every need. 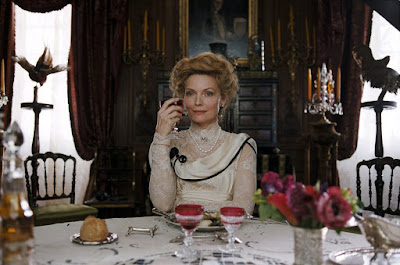 Jump ahead six years, however, and Momma Peloux has decided that she wants the one thing Lea can't give her: grandchildren. She has arranged Chéri's marriage to another of their colleagues' daughters (Felicity Jones, Like Crazy [review]; Rogue One: A Star Wars Story). Understanding that this is the way the cookie crumbles, Lea accepts her bitter fate with a stoic resolution, but in private, her heart is breaking. While Chéri and his bride are honeymooning in Italy, she disappears to a private resort to chase muscle-bound youngsters. It's quite possible that her move is intentional, that she knows by taking the treat away from her young pup, he will go looking for it, but if such is her motivation, it's never spoken. Were Lea's plans and schemes made more obvious, or if we even knew more about her anxieties, Chéri would be a much more interesting film; instead, the tug of war with Lea and Chéri's heartstrings ends up just being surface and predictable. 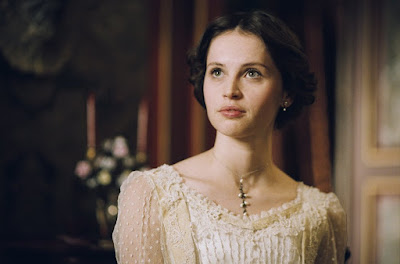 The lack of clear plotting is surprising, given that Chéri reteams writer Christopher Hampton with director Stephen Frears. The pair covered similar romantic ground a couple decades ago with the delicious and wicked Dangerous Liasons. The secret motivation of lovers should be their stock in trade. Likewise, one might expect something sensuous and sexy from them, particularly when adapting a writer like Colette, an author known for the steam heating the spaces between the lines in her stories. For all the swallowed tears and ailing hearts in Chéri, the movie is cold and dispassionate, and for all the talk of sexual affairs, there's not much lovemaking on the screen.

I was actually surprised to see that Chéri was not based on one, but two novels by Colette, because there didn't seem to be all that much story there. I asked a friend who I know has a fairly substantial knowledge of the author, and she said that the books weren't really plot oriented, that mood and internal conflict is more important than story points. This makes it all the more shocking, then, that Hampton and Frears were so reluctant to delve deeper into what was going on under the surface, to get at the heavy feelings behind the steely expressions. Michelle Pfeiffer would surely have been capable of handling more nuanced material. You can see her trying to add to her scenes, to communicate what the dialogue does not through her face and her startling blue eyes. It's a performance absent of vanity, with the actress unleashing outbursts of emotion that are almost embarrassing in how clumsily true they are. 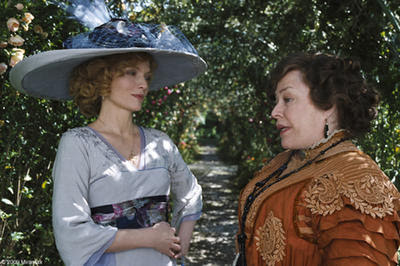 By the time of the big emotional climax of Chéri, I should have been all fired up, but I was just sleepy. For such a short film, it started to feel like it was going on forever, and for as long as it felt, it's all the more annoying that Chéri turns out to be a film that's hardly about anything at all. Is it just that they were scared to sell us all of the fire and passion of a May/December romance? If so, that's just ironic and sad. Squandered potential, really. Like the returning voiceover informs us at the end, the biggest tragedy of Lea and Chéri is that had circumstances been different, they could have had so much more. So, too, could this film. 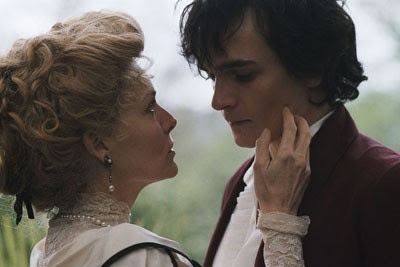