This review was originally part of a write-up of the High School Flashback Collection, released in 2008. Go here to read the full piece, including my takes on Sixteen Candles and Weird Science. 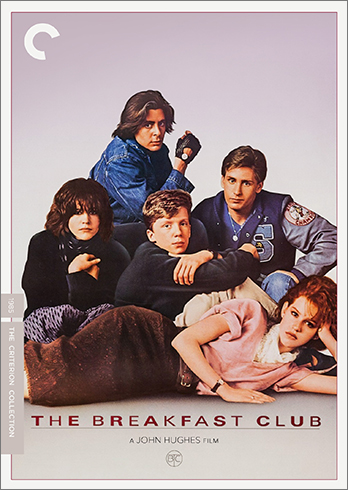 For his 1985 film The Breakfast Club, writer/director John Hughes would hone his perception of the class structure of high school into a perfect diamond. Like a version of Sartre's No Exit set in detention, The Breakfast Club brings together what Hughes saw as the five iconic "types" that make up any high school: the brain (Anthony Michael Hall), the athlete (Emilio Estevez), the basket case (Ally Sheedy), the princess (Molly Ringwald), and the criminal (Judd Nelson). All five have gotten into trouble for various reasons, and all five have been assigned a special Saturday detention. Though none of them are friends going into it, they do all carry their preconceptions and have relationships that exist based on those lines. Over the course of their incarceration, they will cross those lines, get to know one another, and eventually reveal who they are based on what lead them to that room in the first place.

The Breakfast Club is deftly constructed, setting up its thesis right from the start with Anthony Michael Hall's voiceover about the categories the group feels they have been put in, and then promising to break those down. Hughes looks for the truth in those categories and builds real characters that conform to them while also being rounded out enough to bust the conventional wisdom about each. He starts with the outer trappings--the clothes they wear, the food they eat--and expands from there to show that these accoutrements bolster the outer masks--Judd Nelson's bravado, Emilio Estevez's machismo, Ally Sheedy's freakish demonstrations. These masks inevitably clash, but each time they do, a piece breaks off. Though each character lies about themselves, the fact that they demand honesty from the other students means they eventually have to own up, too. The bonding happens slowly over the course of the day, bolstered by their common situation and their common enemy, the principal stuck watching them (Paul Gleason). Arguments and pranks lead to deeper conversations, and it becomes clear that all the kids have real problems, and that most of those problems stem from the same insecurities about who they are, where they come from, and where they are going. 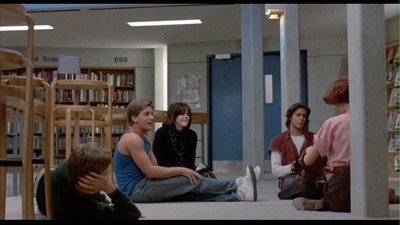 The last of the barriers break down in an emotionally intense scene that begins lightly, with the five enjoying their buzz after smoking out, but Hughes isn't content with an easy bonding session. Again, it's all about respecting the characters and the age group he's portraying, acknowledging their problems are real and not to be solved by the easy platitudes of an After School Special. Hall's character, Brian, asks if anyone will actually say hello to him in the halls on Monday, and the truth, as it often does, hurts. Once the honesty starts, though, there is no stopping it, and it paves the way for some final transformations that we might otherwise find unacceptable. Hughes leaves himself the escape clause that it might all be another ruse.

The ensemble cast here couldn't be more perfect. Hughes really was a genius of casting, and he gives his actors enough room to explore that they all invest their roles with authentic pathos. Every viewer enters the movie with a preconceived allegiance to one of the five but then leaves with sympathy for all of them. Judd Nelson has the showiest role, and he tears it apart. It's sad that he never had another part to quite match it. Ally Sheedy proves herself to be the most inventive of the cast, having the weirdest character to play and quietly indulging in all sorts of comedic business. Even when she is saying nothing, she is always lurking about, always watching. As the compulsive liar, she sees through everyone's images first, and being the true outcast, has no social consequence to face by drawing them out--except having to be social herself, the greatest and most subtle transformation of them all. (Well, pre-Extreme Make-Over.) 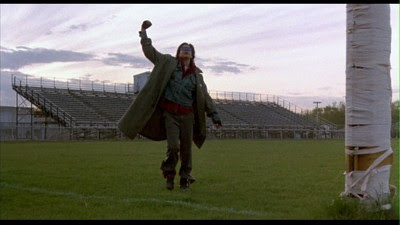