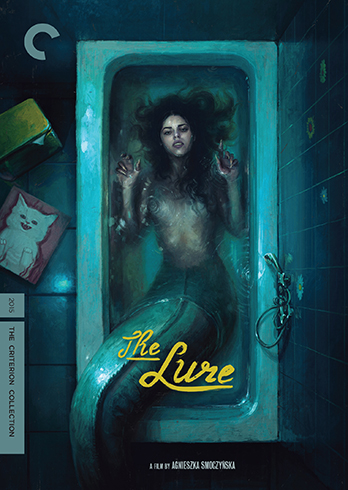 A new twist on an old tail, The Lure is an updated The Little Mermaid with all the ferocity restored. This full-length debut of Polish director Agnieszka Smoczyńska is a musical extravaganza borrowing from the early days of MTV and cable television horror flicks. It’s a colorful manifesto, a cautionary fairy tale, and a bizarre character study all in one. The Lure is also fun and surprising. While some outcomes are predictable just by the nature of the material, you aren’t likely to guess the turns Smoczyńska and screenwriter Robert Bolesto will take to get to them.

The Lure begins at the water, as two teenaged mermaids, Golden (Michalina Olszańska) and Silver (Marta Mazurek), entice two men with song. Once rescued from the water, these men and their female companion (King Preis) take the girls to their place of business--a skeezy nightclub where they perform as the backing band for burlesque acts. Seeing a moneymaking opportunity, the band’s drummer (Andrzej Konopka) and the club owner (Zygmunt Malanowicz, Knife in the Water [review]) put the girls on stage, creating song and dance numbers that build up to their sliding into a pool of water, restoring their fish tails for all to see. 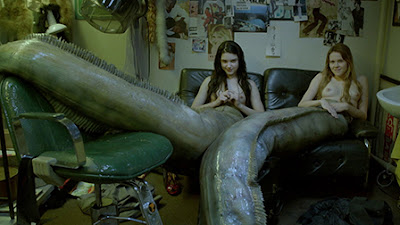 This new act is a hit. It’s sexy and taboo and altogether unexpected, so why wouldn’t it be? Naturally, based on myth as The Lure is, the girls coming to land is not without its price. As Silver is enticed to join the human world, finding a bit of romance with the band’s mercurial bass player (Jakub Gierszal), Golden embraces the more animalistic side of her nature. Mermaids, as it turns out, are predators, feasting on the hearts of unsuspecting victims. One girl turns toward love and assimilation, the other embraces her internal power and devours the living symbol of that love--the one catch being that if Silver sacrifices her true self, there will also be consequences for Golden. She can’t let her sister break up the act.

Of The Lure’s many themes, the most prominent is that of exploitation. The humans take advantage of the creatures they have found, but they also find they are not so innocent; likewise, the mermaids are exploiting their human hosts, to a degree. They quickly learn to get what they want by using their sensual charms. There is also much to be examined in how the human world pollutes these women of the sea--smoking, drinking, lust. At one point, Silver even asks why they aren’t being paid. How will mankind’s temptations alter them?

Smoczyńska’s gleefully gruesome tableu isn’t just a joy to watch, but also a marvel to look at. Its 1980s stylings are creative and colorful, owing as much to pop music videos as to classic movie musicals. For a horror film, The Lure is very bright. Kuba Jijowski’s cinematography embraces the glitz of its showbiz settings, contrasting it with the dark of the natural world (we only return to the river at night) and the drabness of the backstage environment. You’d think with such a squalid existence that the band would be dazzled by these unbelievable beings entering their lives, but they so quickly absorb them into the normal routine, even the violence is easily accepted. In the end, they don’t deserve the magic being made available to them. What’s the old joke about how if humans can’t fuck it, they have to kill it? 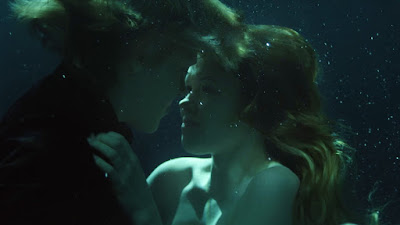 Most effective, though is Golden’s solo musical number. The film turns monotone as the scene freezes and we enter her mental landscape. It’s personal and slightly terrifying. Special kudos should be given to the translators who made the Polish lyrics still flow as English subtitles, with clever rhymes and pacing the lines to match the music. The characters in The Lure may be bored of the entertainment they’re participating in, but the presentation, even as it stretches across borders both physical and cultural, ensures that we are not. 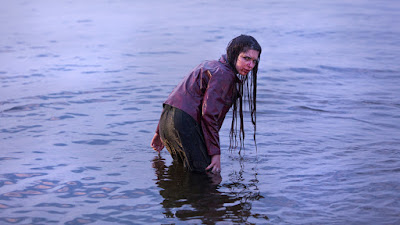 Music also play an important role in Smoczyńska’s 2007 student film Aria Diva. In this half-hour short, a housewife begins a friendship with the opera singer that moves upstairs. It’s a complicated relationship, with some challenging maternal overtones, but also an undercurrent of romanticism. Here we see hints of the director’s interest in the transactional nature of performance, as well as another instance of someone who is “different” moving in and out of the life of someone more “normal.”

Opera is likewise the subject of Smoczyńska’s 2010 short documentary Viva Maria!, profiling Polish diva Maria Foltyn as she passes the torch to a successor. Archival footage of the singer at work directing in her younger years shows us just how deep her passion ran--and still runs. 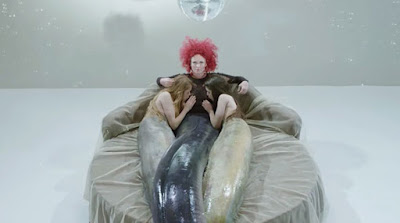