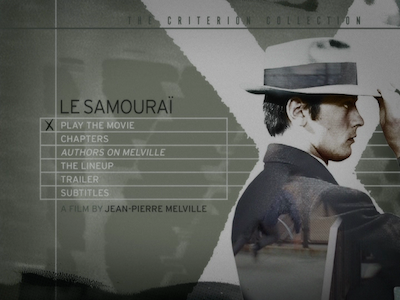 It’s not the silence that gets me about LeSamouraï, it’s the stillness. Sure, it takes ten minutes before anyone says a word in Jean-Pierre Melville’s 1967 crime masterpiece, but that’s not really what makes Le Samouraï so riveting, so impossible to look away from. That would be the economy of movement, and the willingness of the camera, along with everyone in its lens, to remain perfectly still. Particularly Alain Delon, playing Jef Costello, the hitman that leads this thing. He spends much of the movie with his hands in his pockets, staring straight ahead. It’s a performance absent of gesture. He only moves when he acts. 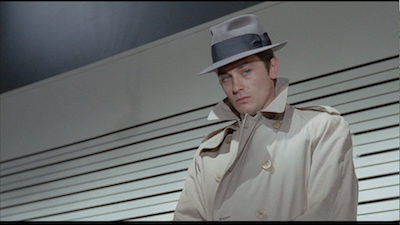 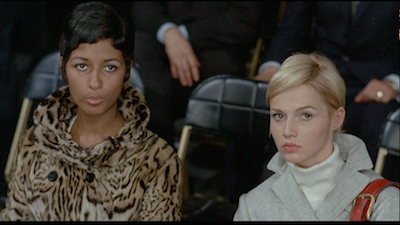 As with his heist film Le cercle rouge [review], Melville builds this noir knock-off around a Japanese proverb, this time borrowed from the Bushido, the code of the samurai warrior (or, at least purported to be, since apparently Melville made it up). “There is no solitude greater than that of the samurai unless it be that of a tiger in the jungle...perhaps....” Jef is a man without personal relationships, only connections. He lives alone with a chirping bullfinch that acts as his canary in the coal mine, its behavior tipping him off to any intruders. His clients can be anonymous, and the man he kills at the start of Le Samouraï, the nightclub owner, is a stranger to him. He’s a lone wolf (no cub).

Each step toward the hit is part of a methodology: getting an untraceable car, establishing an alibi, picking a route that will make it less likely for him to be seen. Step by step, Jef goes about his business. Only the unpredictability of others is his real enemy. This particular job starts to go haywire when a piano player in the club, Valérie (Cathy Rosier), is in the hallway when Jef exits the boss’ office. Her vague description of the killer causes police to round up any usual suspect that matches the brief. Except, when Valérie sees Jef in the line-up, she changes the details of her story to protect him. He doesn’t know why, and neither does the detective (François Périer, Orpheus [review]) pursuing the case. He’s sure Jef is his man, and he starts hunting the jungle cat with the a precision to match Jef’s own (provided, again, others don’t screw it up for him). 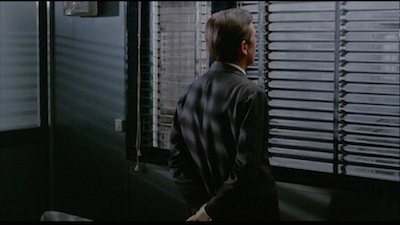 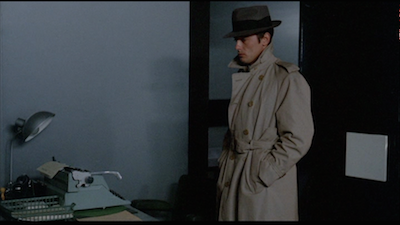 Breaking it down, Le Samouraï is a portrait of a cold-blooded killer having his blood warmed. Though Jef tracks Valérie down ostensibly to find out who his clients are after a double-cross, presuming they paid the musician to lie on his behalf, their encounter has a different effect on him. Jef sees the kindness in the woman, and he begins to understand that there is benefit to not always being alone, people can care about you and help you. At least, for me, this would explain his actions in the film’s final scene. He has fallen in love with her, such as he understands it. So he takes care of her in the only manner he understands: kill or don’t kill. (She wears animal print in early scenes: is she another predator or prey?) 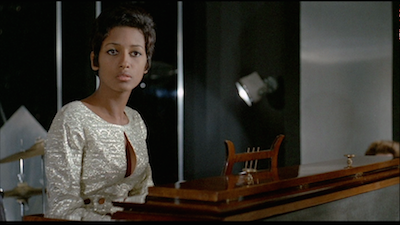 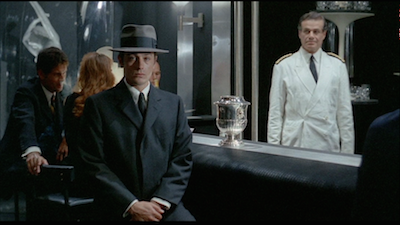 It’s funny, because the first time I’d ever heard of Le Samouraï was when I was editing the comic book series Red Rocket 7. Michael Allred’s sci-fi comic was a tour of rock history through the eyes of an alien clone. Allred is an expert retro stylist, the sort of guy who would watch Melville’s immaculately designed film and see things he could use in his own work. In this case, the author opens an issue of Red Rocket 7 with Red’s girlfriend telling him “I love you” while in a movie theater. The movie they are watching in this moment of potential emotional panic? Le Samouraï. On the screen behind him, Jef Costello has a gun pointed at his head, held by the man who betrayed him. It’s a smart parallel. This kind of emotion is just as deadly for Jef as it feels for Red (though romance has more purchase in Allred’s world). 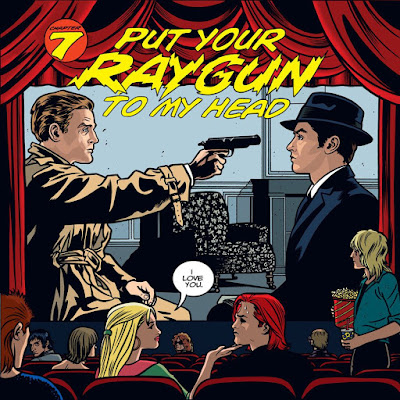 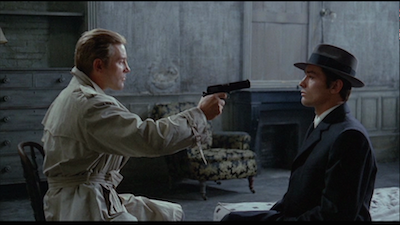 Le Samouraï is a cool film. Not just hip, but I mean in temperature, in look. There are no vibrant colors in the movie. The skies are gray, Jef’s apartment is green and brown, the nightclub is silver and blue--perhaps the most colorful image is Valérie’s white gold dress. It’s sparkly in much the same way the nightclub décor sparkles. It’s sleek and fancy and modern, but not necessarily space age. The club itself presents a different world, one that is clean and shiny. Everywhere else Jef goes is grimy and dank, with maybe the exception of the apartment of Jane (Nathalie Delon), his alibi. Its feminine details are soft and lean toward lighter hues, in contrast to the masculine, utilitarian, beige and gun-metal grey police station--hence, the police destroying the peacefulness of the flat when they invade. Every set is designed to let you know whom you are dealing with the moment you step through the doors. Those coming to this edition of Le Samouraï for the high-definition upgrade will be pleased to see how much the image has improved. (NOTE: The screengrabs here are taken from the 2005 DVD release.)

One last thing before I cease my ramble--AND THOSE WHO FEAR SPOILERS PLEASE LOOK AWAY NOW AND COME BACK LATER--but let’s talk that last scene. 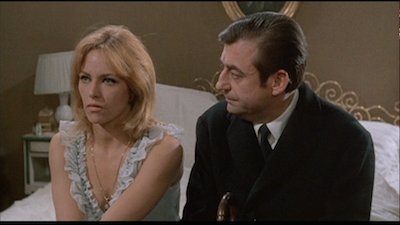 The death of Jef Costello is its own odd style choice. In one sense, it recalls the end of Breathless [review], when Belmondo falls backwards in the street after being shot. Of course, Melville appeared in Breathless, and Jean-Luc Godard looked up to the older director, so is it possible that the end of Le Samouraï is some kind of metatextual answer to the conclusion of the revolutionary nouvelle vague classic? Delon does not go down with the same improvised realism of Belmondo. Rather, in much the same way that Michel’s death in that earlier film reflects the freeform aesthetic of Godard’s mis-en-scene, Jef’s death has a more rigid, theatrical styling, befitting both the aesthetic of Le Samouraï but also of a more classical filmmaking technique. With the small trickle of blood on his mouth, clutching his chest with gloved hands, Delon almost looks like Bela Lugosi sinking back into Dracula’s coffin. Is it the death of a warrior, or the finale of a horror movie?

Then again, perhaps it’s nothing. But if Jean-Pierre Melville is as precise as the character he gave life to, we know it has to mean something. Even if it’s just a sacrificial pose or that Jef is as unmoved by death as he is all else. 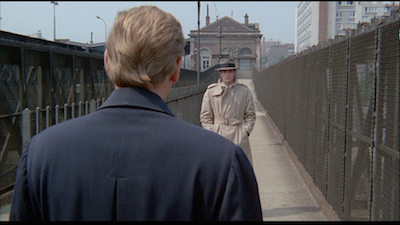 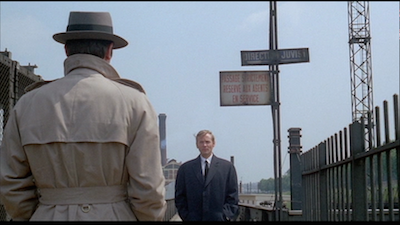