This review was originally written in 2011 for DVDTalk.com. 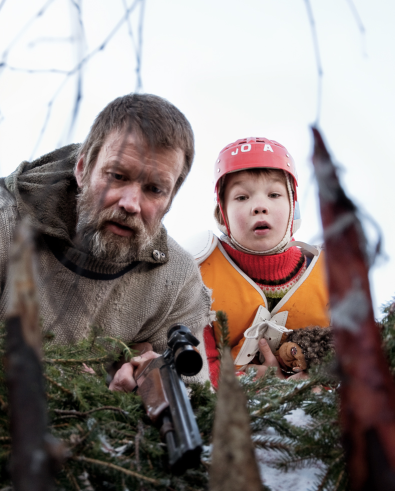 What if Santa Claus were real, but instead of being the kindly old gentleman you see on greeting cards, he's really a horned devil who comes and steals naughty children for punishment? This is the Santa that the little boy Pietari (Onni Tomilla) believes in. He's read about the true Kris Kringle in books, and when an American company begins drilling in the mountain near his Finnish home, he's scared of what they'll find. Is that Santa Claus living deep down there in the frozen earth?

Rare Exports: A Christmas Tale was a surprise hit in the 2010 holiday season. Written and directed by Jalmari Helander, it's an entirely original take on the Christmas mythos. Tired of traditional family fare but not quite ready for the gore and splatter of Silent Night, Zombie Night? Then Rare Exports is exactly what you're going to want in your stocking. It's like Super 8, but on the frozen tundra and with a lot fewer lens flares.

Pietari lives in the arctic with his widowed father (Jorma Tomilla), a reindeer herder who relies on the yearly migration of the big animals to put food on the table and money in the bank. The first sign that something is up is that the entire herd ends up dead before they even arrive. At first the locals think it's wolves stirred up by the drilling and explosions of the excavators, but weird stuff starts happening. Radiators get stolen, and all the kids go missing--except Pietari, who is also the only one who notices. At the same time, a bizarrely resilient old man ends up in dad's wolf trap. Is that Santa? 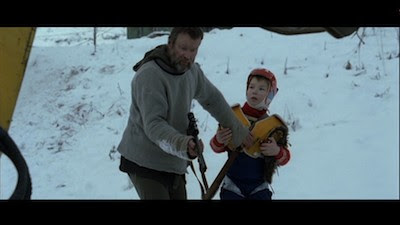 What we have here is essentially an old-fashioned sci-fi monster movie. Having captured the geezer they believe to be Santa, the men try to sell him back to the Americans. Of course, the whole scheme is much larger than they bargained for, and only young Pietari really gets what is going on. Everyone thinks he's strange and won't listen to him. He's wearing hockey gear and cardboard armor and dragging around a stuffed animal on a leash, so he doesn't appear to be the most reliable witness. But, as they get to the bottom of things, it's going to be up to Pietari to save the day.

Onni Tomilla is a pretty good child actor. He ably balances his fear with determination. Knowing you're right is more important than being scared. The most developed relationship in the movie is between the young boy and his father, but that is no surprise when you realize that the actors fulfill the same roles in real life. The elder Tomilla displays a natural mixture of warmth and stern frustration, the sort of thing a real father would know instinctively. The back and forth between the two adds an authentic energy to Rare Exports that allows it to work as a family movie despite its odd premise and, you should be warned, a lot of naked elf wang.

Helander and his team, including cinematographer Mika Orasmaa, have made a fun, stylish movie. The dark skies and frosty landscape make for a perfect chase atmosphere. Flakes of snow tumble over credible computer graphics, and the music of Juri and Miska Seppä helps set the mood using familiar, but effective tactics. Kimmo Taavila's editing is smart and swift, making sure the movie never rests too long. Though, actually, that might be Rare Exports' lone problem. At a slim 82 minutes, the mystery doesn't fully take hold before we get the big reveal, and Pietari devises his plan for success a little too easily. I was just getting into it, there was still more room to play!

Thankfully, Helander still has a funny, twisted ending up his sleeve. Here the quick execution works perfectly, we don't have time to get hung up on the logic of it all. It's a gleeful, cynical commentary on the worldwide commercialization of a holiday, like Linus Van Pelt's worst nightmare. No treacle-laden hugs to ring out this pageant. Rare Exports is dark right to the finish, and it's a wonderful gift for those sick of socks and fruitcakes. And hey, aren't we all? 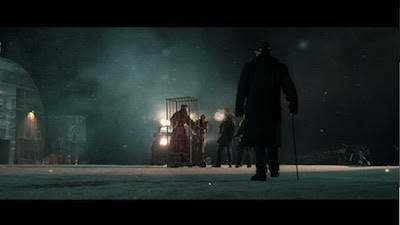