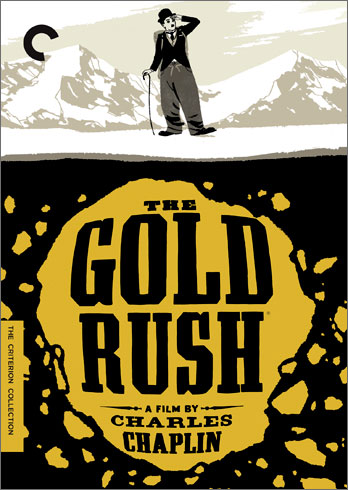 If you’re looking for a movie to watch this New Year’s Eve, there is no better place to look than Charlie Chaplin’s 1925 masterpiece The Gold Rush.

The final act of Chaplin’s silent comedy kicks off on New Year’s Eve, with the auteur’s Little Tramp character hoping to meet up with the dancehall beauty Georgia (Georgia Hale). It’s a union that is not to be, at least initially, as Chaplin of course prefers a little melancholy in his romance. Not to mention his belief that new beginnings need to be earned, which is all the more reason for him to set this pivotal moment of his film during the holiday. 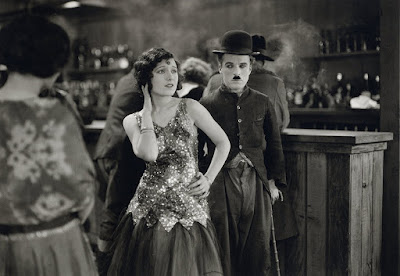 New Year’s represents many of the same values that Chaplin put into his all of his films. It is a holiday that encapsulates his view of America, and so perfectly fits here in The Gold Rush, a philosophical piece of slapstick that embraces one of the great American myths. Just this past holiday my dad drove me past a mountain stream in Northern California that used to be a major source for gold. He wistfully told me how there is believed to be an untapped reserve still buried in the mountain, just waiting to be uncovered. Such was the dream of many men heading west in the 1800s. There were riches to be found in the California hills. 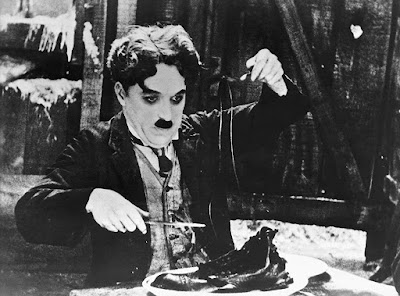 And for Chaplin, riches to be found in the California valleys, as well. For what is the promise of early Hollywood but another gold rush, another chance for Americans to make a bid for success and riches? As in all of the Tramp films, the character in The Gold Rush represents the little man in search of something better, standing up to adversity--be it the weather, beast of the forest, or his fellow man, prone as they were to prejudice and bullying. Here the Tramp goes to a remote outpost on the hunt for his fortune, finds romance, and thanks to his own positive demeanor, also forms bonds that bring him both the kind of financial windfall and emotional payout he could only dream of. The fact that it all goes wrong on New Year’s Eve is just all the more incentive for him to turn things around. One opportunity missed only spurs him on to find another. 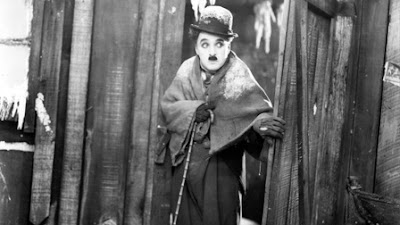 This, of course, is all subtext, but when we consider other films with the Tramp character, such as The Kid or The Immigrant, it’s not hard to extrapolate a deeper meaning from the inventive pratfalls. Of which there are many. Some of Chaplin’s finest and most enduring routines are present in The Gold Rush, including the dancing dinner rolls and the visually stunning climax where he and his partner (Mack Swain) struggle to escape a house teetering on a cliffside. My favorite bit is probably the dance floor scene with the dog where, typically, the Tramp’s attempts to cover his own weakness nearly blows up in his face. In that and all the rest, the charm of the Tramp is his good-natured tenacity. He’s the right kind of good guy and awfully easy to root for.

Like so many of us, the Tramp is often misunderstood and misjudged. Right up to the end, as it turns out, when even after he’s found his gold, he’s mistaken for a stowaway on the boat taking him back to civilization. This may be the most heartwarming message of all, reminding us that no matter where we go or what we achieve, we still are who we are, and should maybe not forget that--because being who we are is perfectly okay, it’s what got us where we are. For the Tramp, it not only reminds him that it was his friendship that carried him through while giving him another opportunity to fall on his keister, but also gives Georgia her chance to show she has a charitable heart, as well. 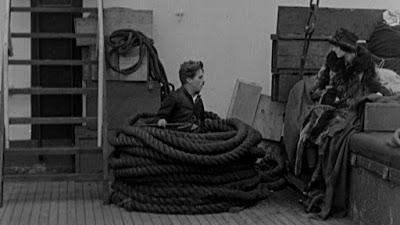 If you’ve never seen a Charlie Chaplin film before, this is a pretty good place to start. And if you’re a fan, it’s a good one to revisit--though, avoid the 1942 version where Chaplin added voiceover. He may consider it his “definitive” cut, but the narration adds nothing to the material; rather, it only detracts from the viewer’s emotional connection to the comedy by interpreting everything for them--which is the most important part. The Gold Rush will ring out this or any year in a way that will remind us why we all do what we do, showing us the good in our fellow man and reinforcing the optimism inherent in an American Dream we all should still want to believe in even if sometimes we can’t. 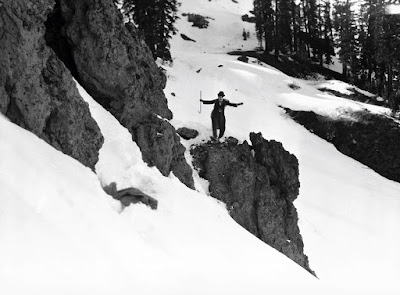