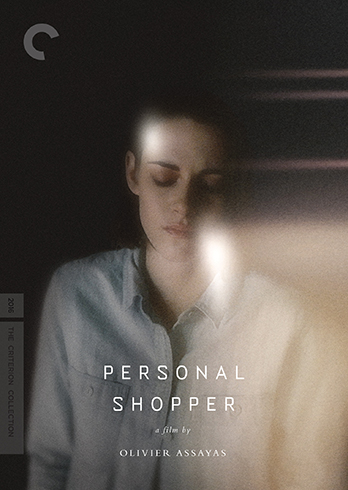 If you still have doubts as to how good an actress Kristen Stewart is, just watch her emote in reaction to smart phone text conversations in Personal Shopper. Exchanging personal messages with an unknown individual, she both interacts with the phone and her environment, searching those around her for the potential correspondent. Panic, intrigue, fear, engagement, daring--she runs through these various emotions, delivering her side of a silent conversation--the only dialogue appearing on a small screen--through expression and gesture. It’s an intriguing performance, bringing to life a gripping directorial device, one that focuses the audience with the same intensity Stewart brings to the rest of the film. 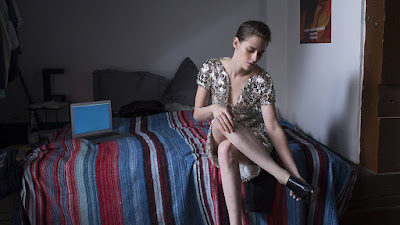 “Focus” is a good word actually. As Maureen, Stewart’s focus is unwavering. Watch her as she tries on the clothes from her boss’ closet, rushing the mundane task of dressing, adding an urgency, this is something she’s not supposed to be doing. It’s a private moment enacted for the moviegoing public, but with zero regard for the camera. She’s forgotten she’s being watched, even if we have not, even if we remember that the person on the other side of the phone may actually be observing her somehow. It’s all about the action and ritual of getting dressed. This kind of energy is essential to Personal Shopper succeeding. Writer/director Olivia Assayas, who previously directed Stewart in Clouds of Sils Maria [review], hangs everything on his lead. She is in every scene, only off camera in rare instances. This is her movie to win or lose--and Kristen Stewart totally wins.

It’s hard to describe what kind of movie Personal Shopper is. It’s actually many things, free of being tied to one genre. Its most prominent trait is probably suspense. This is a suspenseful drama with supernatural twists and elements of crime. It’s a story of identity. It’s erotic. While there are multiple plots--Maureen’s two jobs, a spiritual medium and the titular shopping gig; the hunt for the ghost of her dead brother; the back-and-forth with the texter; the mystery that rivets us in the final portion of the picture--Assayas doesn’t put any one aspect in the driver’s seat. Rather, he invisibly toggles between each piece, properly treating them as a single whole the way a great novelist might. Strange, unexplainable things happen to Maureen, but they are as matter-of-fact and normal as her everyday life. It’s an impressive illusion. Personal Shopper never fails to feel real. 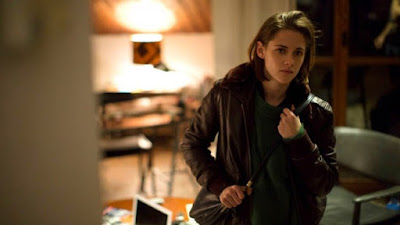 There are two central questions being asked throughout Personal Shopper. First, who does Maureen want to be? Second, are the outside forces she encounters benevolent or malevolent? The latter applies not just to the unseen (and sometimes seen) ghosts, but to everyone in her life. Is Kyra (Nora von Waldstätten), the socialite Maureen works for, considering Maureen’s interests at all? Is the designer who wants to see Maureen in her client’s clothes looking to screw her over? What is the invisible figure on the other side of the phone really after? 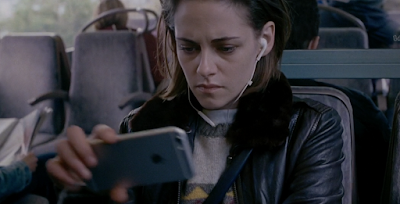 Assayas works with rhymes and parallels to create both tension and possibility. Maureen’s discovery of the Swedish painter Hilma af Klint, for instance, provides Maureen with an example of a concrete application for her connection to the afterlife. Klint claimed her abstract paintings were commissioned by wandering spirits--facts we learn from a documentary embedded in Personal Shopper, one of two movies inside the movie (the other is the re-enactment of a séance, which you should pay attention to, it gives you a few tools for interpreting things later). Klint is said to have rejected her artistic training and a normal creative path to go in this other direction, prefiguring the emergence of abstract painting and risking ridicule. Likewise, Maureen has seemingly given up part of her own identity to earn a paycheck. Necessity trumps desire. The job itself is assuming another identity. A personal shopper makes decisions for her client, chooses the clothes she wears, yet never really steps into her shoes, neither literally nor figuratively. Arguably, these acquisitions for Kyra are more tangible than the pursuit of apparitions. Note how when Maureen selects the items she’ll take from the shops, she holds them in her hands, tests their strength, be they jewels, belts, or what have you. These are things she can grasp, even if she must surrender them. 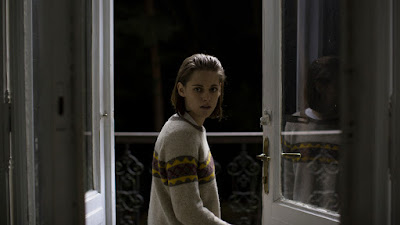 Yet, the job isn’t everything, Maureen is already a double. She had a twin brother, and both were born with a congenital heart defect that cost him his life when he was only 27 (that most portentous of ages). Maureen could also die from it, and the affliction is yet another presence that hangs over her. Will it assert itself or let her be? But it’s the lost brother, Lewis, that holds her back more than their shared bad heart. Maureen remains in Paris waiting for her departed sibling to fulfill a promise and send her a message from beyond the grave, releasing her from their bond, granting his blessing that she move on.

Except maybe that’s not the lesson she needs to hear. Or more specifically, maybe she shouldn’t be waiting for that validation. Most of her encounters, be it the odd conversation with Kyra’s lover or the awkward chat with the new boyfriend of Lewis’ ex, the message seems to be that Maureen needs to act for herself, to stop waiting for others to give her the go-ahead. The person texting her wants to know if she wants to be someone else, and she thinks she does, but one might glean from Personal Shopper’s cryptic ending that what Maureen really needs to be is herself. She needs to realize that when she’s choosing the clothes for Kyra, she’s choosing the ones she does because they are what she really wants to wear. 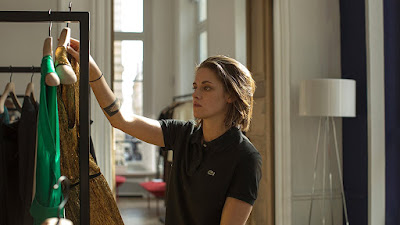 Assayas handles all the different elements of Personal Shopper with a clarity that transcends any of the narrative’s internal confusions. He and cinematographer York le Saux (Carlos [review]) shoot every different environment and situation with the same sense of normalcy. The images are beautiful, yet lacking in ostentation. Even the special effects shots in the haunted sequences are simply integrated, never overtaking the moment, presented at a scale equal to Maureen’s. Amazingly, those scenes are still spooky, just as some of the later set-ups create a palpable anxiety. The realism of the crime scene in the final quarter is unnerving, immediately putting us in the moment. Likewise, an arty choice in a climactic scene not only gives us further reason to potentially believe the ghostly aspects of the script, but also turns our expectation on its head rather than telegraph a coming turn.

Personal Shopper is moody and weird, and it’s best viewed with an open mind and total attention. You won’t know where it’s going from moment to moment, but that’s a good thing. Once all those moments are put together, it’s one of the most satisfying new movies in recent years--and one that rewards multiple viewings. The film’s mysteries have plenty more to offer than is evident on first glance, all of which play out and are revealed on Kristen Stewart’s face. Don’t stop watching her, because she’s watching everything else, purchasing these experiences for our benefit. 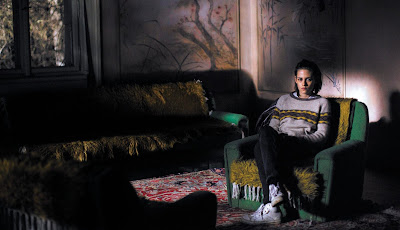 Shopping always makes women happy. Because they like to wear fashionable cloth. So for this you should find a personal shopper. They will give you fashionable thought in this case.