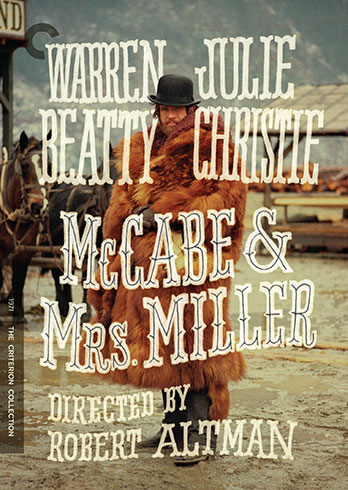 There is a lot going on in McCabe & Mrs.Miller, Robert Atman’s 1971 western, and a lot to admire, but I think what comes to mind first for me is the impossible construction.

I mean this in two ways.

First, there is the location itself, the mining town of Presbyterian Church, set deep in the mountains of the Pacific Northwest. It is simply a place that should not be, higher than man should really be climbing at the time, arguably so high that they have surpassed the heavens and offended God. For certainly He is not present in this ironically named town. The lone church stands empty and unappreciated, which gives one cause to wonder by what providence it remains standing. How do its rickety shacks not go sliding down the side of the mountain? What prevents the even more rickety bridge from coming undone and plummeting into the water below? 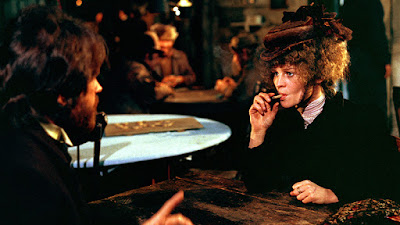 Second, there’s the formless script, written by Altman and Brian McKay. It has a throughline or two--the new arrivals in town, their enterprises, and the efforts to shut them down--but there seems to be little blueprint. In a sense, McCabe & Mrs. Miller is episodic, but it is also one long endeavor, a drunken bender embarked upon the moment Warren Beatty’s McCabe climbs down from his horse and enters the cramped, rundown Presbyterian Church saloon. People come and go, they meet, they interact, but they don’t follow the dictates of an outline or turns of plot. Except maybe the villains, who trigger change. But then, they are also their own force, pushing through, not tied to any necessity but their own. 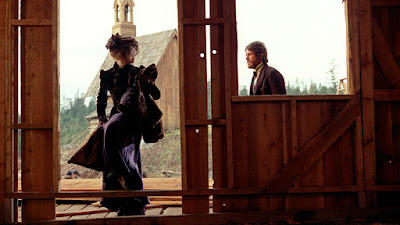 For all the talk of Altman’s facility with ensemble, as the title might imply, McCabe & Mrs. Miller is really a character double header. Beatty plays McCabe, the gambler turned barkeep and pimp, as a posturing space case. Like many of Beatty’s characters, he is rarely in the moment, he is always either one step behind or moving on to the next. Beatty has a regular expression that could either be read as confused or lost in thought. It’s his way of disarming everyone, to be more than the handsome leading actor. “That man? That man never killed anybody,” one of the heavy gunslingers opines in reaction to hearing McCabe’s reputation as an outlaw; yet, for some reason, we are inclined to believe the legend.

Legend or not, McCabe is no match for Mrs. Miller (Julie Christie, Billy Liar [review]). Mrs. Miller comes to Presbyterian Church with a proposition for McCabe: she will take over his budding prostitution business and be the madame of his whorehouse. The British woman doesn’t take no for an answer, not in anything. She sees a fixer-upper like McCabe and his business, and she goes about fixing things--a classic, if flawed and clichéd, male/female dynamic. Mrs. Miller brings sophistication to the town. We never quite learn what led her there, though we get the sense that she is outrunning her past as much as McCabe, a hunch in part confirmed by her bad habits. She’s looking for numbness through drugs by film’s end, an oh-so-modern condition. (And an oh-so-ancient one, but perhaps more interesting to consider in the post-Feminine Mystique context of 1971.)

This central relationship is a romance of sorts, but McCabe & Mrs. Miller is no more a conventional romance than it is a conventional western. The two leads are here to serve as examples of the independent minds ready to take advantage of the frontier spirit that defined America’s expansion. Naturally, this puts them up against other concerns. Corporate interests quickly encroach on Presbyterian Church. Whatever they are mining up there, the moneyed and powerful want it, and they won’t stand for a rapscallion like McCabe not playing by the rules. The agents of the unseen conglomerate--including the aptly named company man Roebuck (Altman-regular Michael Murphy, later to play his blundering politician Tanner)--embody the lies of free enterprise. The law (here represented by William Devane’s discouraging attorney) is no help, either. McCabe & Mrs. Miller is as much about the big man vs. the little man and how that fight crushes the American Dream as it is about anything. Right down to the simple fellow making his own way in life (Keith Carradine, Thieves Like Us [review]) who gets taken down by the blonde bully who doesn’t care for trust or fairness.

Altman’s touch here is easy. McCabe & Mrs. Miller is light on its feet, easy to watch, and not without its humor. Carradine’s “aw shucks” manner and René Auberjonois’ feckless saloon owner both get laughs, as do Beatty’s unfinished homilies. His repeated “is there a turd in your pocket?” inquiry is uniquely gross and strange. These characters and their odd ways set up a soft platform for the script’s commentary, which also infuses the movie’s genre-fulfilling finale. It’s fitting that the climax should hinge on the unfinished church, and that the abandoned preacher should cause our antihero such consternation. The church also somehow unites the community in a way the other common threat cannot, perhaps because that threat comes from outside and this one burns from within. Then again, what’s that thing about how if you’re being attacked in public you should shout “Fire!” instead of “Help!” because people care more about property than their fellow human beings? No one lifts a finger in aid of McCabe. McCabe & Mrs. Miller offers no solution for its players. Both of its main characters arguably end the film worse off than they began, partially because their success gave them more to lose. Yet, that American spirit is still there, because at least they remained true to themselves. Push came to shove, McCabe didn’t just let them take him out, he stuck to his price even it the currency changed (your money or your life!), and Mrs. Miller ends up communing with the only person she can really count on: herself.

I’d be remiss if I closed this without touching on the visual style of McCabe & Mrs. Miller. It’s designed to look natural, from the often ratty and ill-fitting clothes, to the precarious lodgings. Presbyterian Church is dirty and muddy and as foul smelling and uninviting as Deadwood would be years later, though here the raggedy aesthetic was very much reflective of the era in which the film was made. The 1970s strike me as a very brown decade, and McCabe & Mrs. Miller is a very brown movie. Legendary cinematographer Vilmos Zsigmond (The Rose; Heaven’s Gate [review]) shot the film in natural light, letting the dusty haze of mountain living give the movie life. There is a visible atmosphere in McCabe & Mrs. Miller. The air has grit. 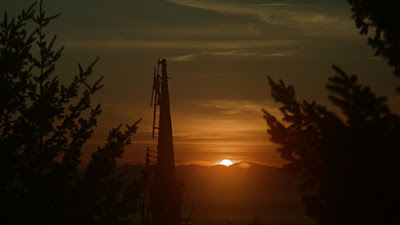 Adding to the film’s disposition is a trio of songs by the great Leonard Cohen. His roving narratives and unconventional melodies give the montage rhythm. In as much as Altman avoids set-up/conflict/resolution in his storytelling, Cohen largely ignores verse-chorus-verse. His melancholy folk could have been anachronistic were it not so intrinsic in how McCabe & Mrs. Miller is cut together. It feels as natural as the ambient noise, the wind in the trees, the rain on the roof. Which is just how I feel about a classic Leonard Cohen record on a hungover Sunday morning--a sentiment McCabe could likely identify with himself.

The songs are perfectly in sync with the cadence and contradictions of Altman’s tale. They manage to be both intimate and expansive, and Altman uses the tunes to underline not only the personal, tracking private moments through close-up and observation, but he also lets Cohen’s mournful playing bring pause. As the internal dialogue of the movie itself goes quiet, Zsigmond’s camera pulls back and goes wide, allowing us to appreciate the scenery. Which maybe gives us more of a sense of what these travelers are all holding on for. It’s freezing and wet and grimy but it’s also lovely in a way only such an open, untamed area can be. The way only an Altman movie can sometimes be. The way McCabe & Mrs. Miller is.

This is precisely what I am lookng beside reckon to arrange our method to me! Anyone establish skilled some awesome job. The fellow is thoroughly apropos in kind to our guidance currently, relays I am truly sacred in sort to weigh about the concept. Blesss among reckon to enormous income. kurosawa film