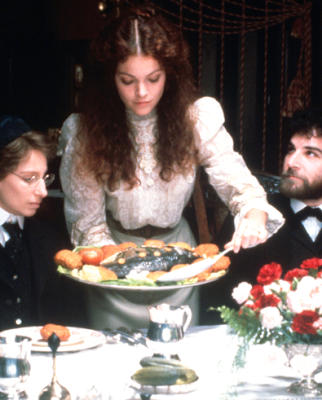 For some reason, a lot of the women in my life, both ones who were simply friends and those who were something more complicated, have had a thing for Yentl. I've never quite understood it, largely because I had never seen the movie. I was eleven in 1983 when the film was released, and you'd have been hard-pressed to come up with a movie I would have wanted to see less than Yentl back then.

Though my tastes have grown more adventurous in the intervening years, and I've even made my way toward enjoying a musical now and again, the opportunity to delve deeper into this Yentl mystery never presented itself. Part of this is that the movie has never been on DVD...until now. 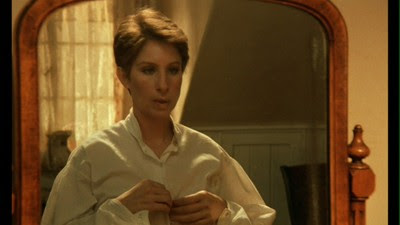 Yentl was the directorial debut of Barbra Streisand, who also co-wrote the script, produced, and starred as the title character. What's that make her? A quadruple threat? Quintuple if you count singing? Because Yentl is a musical, with songs by the great composer Michel Legrand (The Umbrellas of Cherbourg [review) and lyricists Alan and Marilyn Bergman, the trio behind "The Windmills of Your Mind" from The Thomas Crown Affair. The songs for Yentl aren't so much showstoppers as they are emotional flashpoints throughout the movie. Sung only by Streisand's character in her private moments, they track her growth and learning--intentionally so, in fact. The lyricists have stated that the songs are meant to reflect the structure of the Talmud, the sacred Jewish text that Yentl is studying, in that each song builds on the last, one lesson blending into another.

Based on an Isaac Bashevis Singer story, Yentl takes place in Poland in the early 20th century. Raised in a Jewish community by her scholarly father (Nehemiah Persoff), she has secretly been learning the Talmud under his direction despite Jewish law at the time forbidding women from study (just as, to hear the Hollywood legends surrounding the making of Yentl, it was illegal for a woman to direct a movie). When her father dies, rather than be reduced to a life of marriage and servitude, abandoning the world of knowledge she so loves, Yentl disguises herself as a boy named Anshel and travels to another town, where she joins a Yeshiva, a school for Talmud study. There she befriends the handsome and fiercely intellectual Avigdor (Mandy Patinkin), who has recently lost his little brother and sees his fragile spirit reflected in this new and strange fair-faced boy. 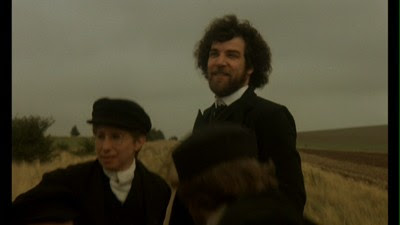 Anshel and Avigdor become study partners and fast friends, and Avigdor even introduces his new pal to his fiancée, Hadass (Amy Irving). This meeting pains Yentl, who has fallen in love with Avigdor, a situation that is further complicated when the engagement is broken by Hadass' father (Steven Hill). Unable to bear another man with his beloved Hadass, Avigdor hatches a plan whereby she will marry Anshel instead. This puts Yentl in a moral quandary: does she reveal her true identity and risk losing everything, or does she stick it out and hopefully keep her secret long enough to put the intended couple back together? Or better yet, how can she hurt no one, keep studying, and still have Avigdor for herself?

Let's get something out of the way before we go on: "feminism" is not a dirty word, and if the idea that looking at a movie like Yentl as a piece of feminist artistry chafes your sensibilities, then you probably are going to have little use for the rest of this review, and even if you do end up watching Yentl anyway, you will miss quite a bit of the larger tapestry that Streisand is creating. As far as I am concerned, saying you aren't a feminist is akin to not being a humanist. To want to have full rights for women is no different than wanting to have rights for all humans. It's just too bad that we've let insidious forces twist that whole point of view into something it's not, finding it easier to maliciously discredit a way of thinking rather than engage it directly.

If I had to hazard a guess, I would say that most of my female friends who expressed a love for Yentl did so because of Barbra Streisand's feminist message in the picture. Now, despite my rant above, before you get the wrong idea, you should realize that just because there is a feminist message, that doesn't mean it is a political one. In my own recent review of The Sidney Poitier Collection, I touched on the fact that what made Poitier such a pioneer was that he changed the perception of African Americans simply by taking on roles that showcased real characters involved in honest human dramas. Likewise, the strongest statement that Streisand makes in Yentl is to present a story about a woman with as much vigor as any story helmed by a man and about a man; she need not call attention to what is already there, she lets the story speak for itself. Girls, you can have it all, and what that "all" is need not be what you've always been told it is.

Naturally, Yentl's subversion of the system is a round-about way of female empowerment, and the character's arc through the script is in discovering how to shed the deceit and learn to have the courage to be herself. A large part of this is in learning to have what her male counterparts do not: empathy and understanding. She must somehow entertain all points of view in order to challenge them, and the showdown between her and Avigdor when the secret comes out is a wonderful feat of writing and acting. Streisand and Patinkin trade a variety of emotional blows, as Avigdor rides his own tempestuous reaction to having been lied to. As an acting partner and as the character, Streisand must contain him, keep his emotions from veering out of control, and bring him back down to earth so that he might see the truth. He doesn't get it exactly, but that also makes Yentl more honest than one might expect from a romantic musical. 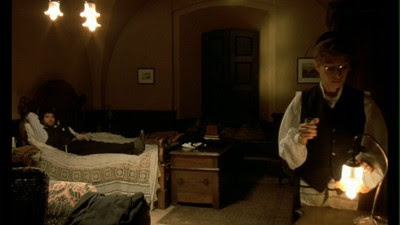 More tender and in its way more poignant is the marital relationship between Anshel and Hadass. In lieu of her inability to perform more traditional marital duties, Yentl introduces Hadass to the world of exploration that has so fascinated her. In doing so, she opens up a more broad line of communication, creating the ideal marriage of equals. Hadass, who has otherwise only been trained to be servile, now can air her feelings and thoughts and engage with her husband the way he engages with Avigdor. It's the seed of change, a theory put to the test.

What makes Yentl even better, however, is that all of the above is in the story without it overtaking the story. The message doesn't get in the way of the narrative, and in fact quite the opposite. At its core, Yentl is a story about finding one's own identity, something comparable to a collegiate drama, and it is also a love story. Really, it's a love story more than anything else, whether it be the love of books or the love of the opposite sex. All those other things are just accessories to the clothes the script wears. Yentl is a movie of heavy emotions, but never cloying or overly sentimental. The emotion is grounded in behavior.

As a director, Barbra Streisand is as assured of herself as she is as an actress. Her use of framing bears a similarity to how a singer understands her song. The way she might choose to move through a note or a line when singing dictates to the listener the emotion he or she is meant to feel. Likewise, by filming a wagon traveling at an askew angle, or capturing the golden light of a lakeside romp, she conveys a sense of feeling that goes beyond verbal exposition. Photographed by David Watkin, who also shot Help!, Chariots of Fire, and Out of Africa, Yentl is a beautiful film, full of rich detail and gorgeous fits of natural color.

Now, though I am painting glowing praise all over the film, it's also not without its faults. It was a little slow to draw me in, and at times, the plotting is a little obvious, treading well-worn paths taken by many other gender-switch stories, but these come off as minor in comparison to the overall effect. Yentl is a warm-hearted film, crafted with love by an artist who was intent on creating a movie she believed in exactly as she believed it should be. Thus, like a friend who sometimes makes you shake your head because she can't seem to avoid some obvious pitfalls, Yentl earns a pass. You can almost hear her as Anshel quote from whatever original source one would draw the axiom "To err is human, to forgive divine."

Not to mention that for a movie that works pretty vigorously at the old "knowledge is power" saw, it does give me a little further insight into what those ladies in my life had been talking about. I can't say for sure if they'd all still be around if I had taken a gander at Yentl earlier, but I suppose it wouldn't have hurt. 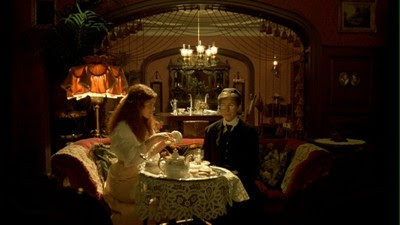