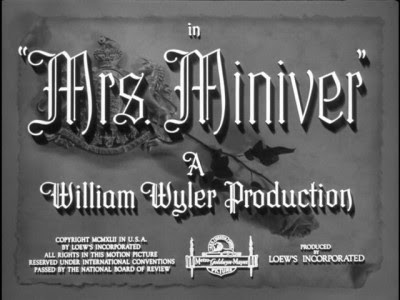 William Wyler's 1942 drama Mrs. Miniver is a rousing piece of wartime propaganda. The earnest and heartfelt family story has a very specific and extremely obvious purpose, and yet it still has the ability to engage and move audiences willing to check their cynicism at the door. Scratch that. That may be underestimating Mrs. Miniver's considerable personal charms. We need not change before entering the theater. The film, like its titular character, may rather have the power to obliterate one's cynicism and turn us all into true believers, much the way the lady herself causes the old woman to drop her selfish pretentions at the flower show midway through the picture. 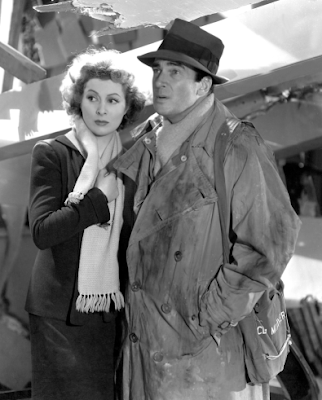 Greer Garson gives an Oscar-winning performance as Kay Miniver, upper-middle-class mother of three. Hers is a sensitive portrayal, meant to illustrate the hidden strengths of British women and the determination and fortitude required in a time of war. Based on a book of essays by Jan Struther, Mrs. Miniver sets up a none-too-subtle contrast between pre-War living and the serious responsibilities of every citizen when their country is in conflict. It opens in 1939, with Kay buying a new hat and fearing telling her husband, an architect, of its cost. Little does she know that hubby Clem (Walter Pidgeon) bought a fancy car well outside his price range. "What's money for," he asks, if not to blow on extravagant things.

This tune soon changes. War is declared not long after, and the Minivers' idealistic first born, Vin (Richard Ney), joins the Royal Air Force. He also becomes engaged to Carol Belden (Theresa Wright, a year before Shadow of a Doubt), granddaughter to the town matriarch, the upper-class snob Lady Beldon (Dame May Whitty). The romance blossoms (pardon the pun) out of a conflict between the two families. The beloved Ms. Miniver inspired the local station master, Ballard (Henry Travers), to enter the village's annual flower competition, and he has named his prize rose for her. Lady Beldon has won the championship cup for the last three decades unopposed, and she's none too happy about the competition. The squabble over a silver trophy seems frivolous in the face of world destruction.
Except it's not really, and that's part of the point of Mrs. Miniver. Life must carry on. Young people should marry, and though the men and women who stay behind should protect the home front, they must also continue with everything their enlisted men are fighting to protect. This is what Garson's Kay Miniver is really a symbol of: the brave face of life under the shadow of death. It's a mother's duty to care for her young, to smile through the heartache, and push forward with every reserve she has. 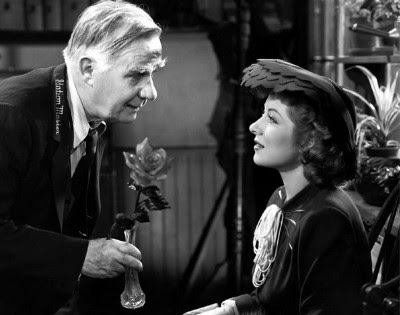 Mrs. Miniver has an episodic narrative, one that took audiences seeing it in its original run from their very recent past right up to their actual present. Amidst air raids, there are side excursions. Clem Miniver takes part in a home guard rescue at Dunkirk, while his wife stays home and captures a downed German soldier (Helmut Dantine), showing herself as the better person as she cares for his wounds moments after he held a gun on her. (The film takes the high road, too, avoiding caricaturing the enemy, or even resorting to extreme racial epithets to describe the opposing forces.) And, of course, there is the joy of the village festival, the much contested flower show. Tragedy follows almost immediately after, but it serves to remind everyone that there is a reason the world is taking up arms against the Nazis.

Wyler is adept at all aspects of his sprawling story. The opening scenes humorously satirize the complacency of modern living, and they are a far cry from the terrifying air raid sequence, when bombs hit a little too close to the Miniver home. While we don't really see combat up close, its presence in the distance, either as sound effects or the sight of fires burning on the horizon, serves as sufficient backdrop. The common terror most British citizens must have been feeling is shared without the filmmaker overselling it, and Mrs. Miniver managed to not only stir the sympathies of moviegoers across the ocean, but it continues to do so across time. A job well done is well done forever; Mrs. Miniver is still inspiring and effective. Garson gives the performance of a lifetime, creating a character that will remain meaningful over many more. 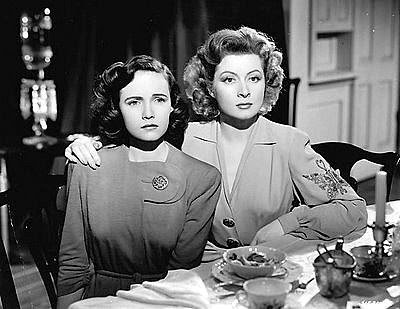