This review was originally written as part of an overview of the Barbara Stanwyck Signature Collection in 2007. 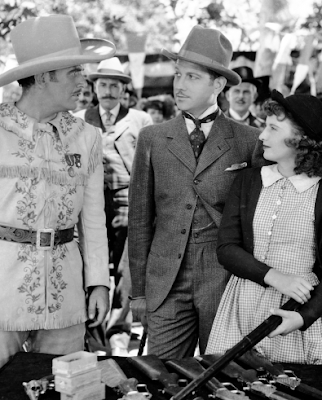 Released in 1935, this early starring vehicle for Barbara Stanwyck is like a backwoods A Star is Born, with Barbara playing the titular Annie Oakley, a.k.a. "Little Sure Shot," the riflelady that joined Buffalo Bill's traveling show in the early part of the century and made a name with her dead-on aim. Directed by George Stevens, this Annie Oakley is the hokum version of the story, fixed up for the movies in order to hit as many emotional chords as it can and fill seats.

Young Annie hunts quail to earn money for her family and earns a reputation for her clean shots. A misunderstanding puts her in a shooting match with trick gunman Toby Walker (Preston Foster) and garners the attention of Buffalo Bill's recruiter, Jeff Hogarth (Melvyn Douglas). Annie joins the show, begins to rival the preening Walker, and then eventually falls in love with him. A heroic accident--Toby saves Sitting Bull (Chief Thunderbird) from Indian haters, though someone should have saved all of these Native American actors (and the African American ones, too) from this picture--hurts Toby's eyes and his pride. This gives Hogarth his chance to move in, as well as setting George Stevens up for a three-hankie ending. For as cheesy as the last scene is, you have to give these old films credit, because it still works. For as much as you start out laughing at a silly film like Annie Oakley, it's hard not to be completely invested by the time the ending rolls around.

A lot of credit for that has to be given to Barbara Stanwyck. She is so very charming as the deceptively naïve young Annie, able to stifle her own pride in order to look out for the fragile ego of her peacock boyfriend. Even as her confidence grows, she manages to hold on to that girlish quality, a strength that is partially bolstered by a genuine small-town innocence. Yet, we also see hints of the Stanwyck that can joke around with the guys. Her performance is a complete portrait of the real woman, even if the story itself is more like a cartoon. 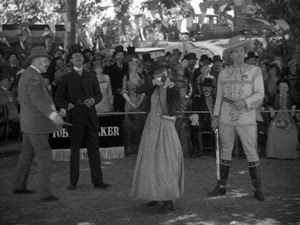