Originally written for DVDTalk.com in 2014. 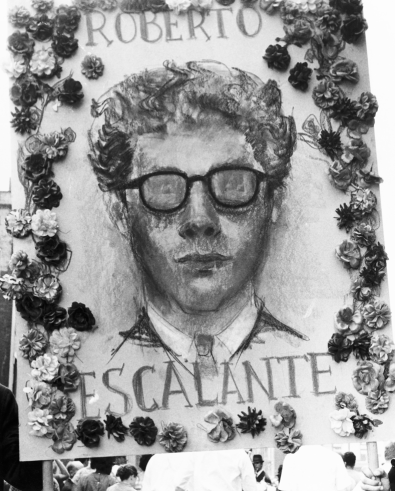 The Young Savages was the second directorial feature from John Frankenheimer, a pioneer of live television, and his first of four collaborations with Burt Lancaster. That it's the weakest of their team-ups should not be altogether surprising then, as Frankenheimer goes through some growing pains trying to apply his learned techniques and the social drama of his TV work to a larger canvas.

Lancaster stars in The Young Savages as Hank Bell, formerly Bellini, an Italian kid from a tough New York neighborhood who is now a respected district attorney. Hank is assigned a case involving three kids from his old block, including the son of one of his old girlfriends (Shelley Winters). The boys are the members of a street gang, and they are charged with a vicious stabbing of a blind Puerto Rican teenager. They claim self-defense, a story that doesn't add up. While racial tensions rise, Hank and his boss (Edward Andrews) push for the death penalty. 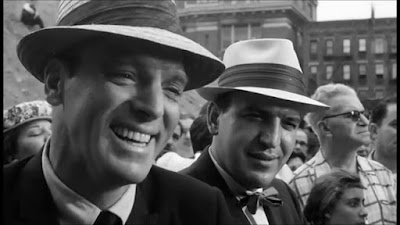 As Hank begins to build his case, he is pulled from many sides. His ex asks him to keep an open mind about her child, while the dead boy's mother cries for justice. Hank's partner (Telly Savalas) maintains a cynical cop's-eye view of the matter, while Hank's wife (Dina Merrill) angrily chides him for being so politically vicious. Not to mention the Italian and Puerto Rican gangleaders who send their minions to apply their own kind of pressure. This all weighs on the prosecutor as he tries to sift through the evidence and testimony. Not everything is as cut and dried as it seems.

The interviews Hank conducts with the various witnesses comprise some of the best stuff in The Young Savages, especially as Frankenheimer takes his actor to different sections of New York, shooting life on the streets in at least some attempt to counterbalance the near-cartoonish portrayal of urban juvenile delinquency. The script tackles racism with an admirable frankness, never shying away from either the unctuous bigotry of the killers or the more seemly criminal behavior of some of their Puerto Rican rivals. One gets the sense that finding the balance Hank seeks is also important to Frankenheimer. Throughout the eventual trial, when Hank is questioned about his seemingly bizarre prosecutorial tactics (he appears to be tanking the case), he insists he is just trying to find the truth. 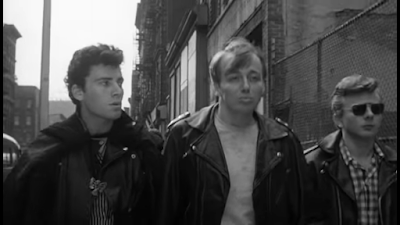 The problem is, The Young Savages lacks the same rigor its fictional D.A. shows in his pursuit of a righteous outcome. One can feel the filmmakers straining to find ways to justify their own bias by adding challenging elements to bolster the counter-argument. This devil's advocacy comes off as overly convenient and slightly disingenuous. An attack on Hank's wife, for instance, compels her to question the empathy she has shown the accused, while Hank's own confrontation with street toughs gives him concerns about his personal bloodlust. These sequences make sense in the grand scheme of the dramaturgy, but they are poorly integrated in the whole and seem only minor distractions from a film that is not at all shy about its driving point. (Which, is not wrong in and of itself; have a point of view! It's fine!) 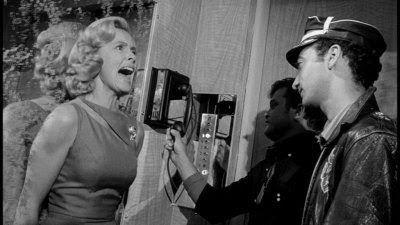 And it's not Hank that tanks the trial, it's Frankenheimer and his writers. Things never get messy, nor are there any unpredictable revelations. The bits we see only hit the right points and are come by too easily, hurrying too fast through the complexities that have been cultivated, rushing to bring us to Hank's inevitable redemption. At least in the eyes of the concerned white women in his life. His bosses, the press, and the victim's family? Not so much.

Still, there's a lot to like. Frankenheimer pulls of some artfully amazing shots, and his general storytelling skills are so facile, the movie never really lags. The way in which the action moves between different settings is so well choreographed, the narrative picks up a real momentum, almost like you're being led through a maze. Lancaster is really strong, as well, providing a stoic wall for other characters to bounce off. I also really liked Merrill, who allegedly never got on with Frankenheimer; her scene where she drinks too much and makes fun of Lancaster's character is edgy and funny. The actress has a good drunk shtick. 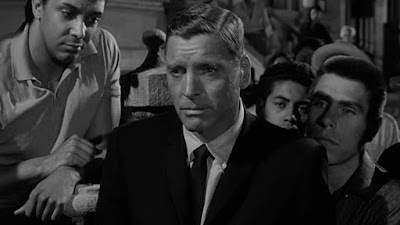 The Young Savages is also very earnest, and that both works for it and against it. As silly as its knee-jerk liberalism feels at times, the sheer force of belief combined with the talent behind it wins out. The Young Savages still has a relevancy in its dissection of race and systematic justice (or lack thereof), even if it doesn't still crackle with the same energy as 12 Angry Men [review] or other contemporaries. 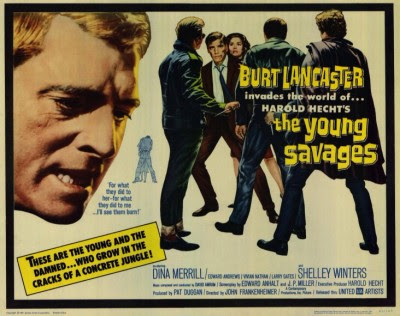 Good flick that is still relevant today in many ways.When they talked about minors being questioned without the presence of their parents made me immediately think of the Central Park 5.

"The Young Savages" is a personal favorite, but yes, it IS flawed, particularly the ending and how "Hank Bell" (Burt Lancaster) handles the case.

In regards to what inspired the story, this is not "trivia," but HISTORY. Evan Hunter (Salvatore Lombino), who wrote "A Matter Of Conviction" from which "The Young Savages" is based, drew inspiration from the 1957 murder of 15 year-old Michael Farmer, a partially handicapped boy (due to childhood polio) who was stabbed and beaten to death by members of teen street gangs ("allied brother" gangs, The Egyptian Kings and Dragons) near a swimming pool at Highbridge Park in New York.

Neil Burstyn's "Batman" Anthony Aposto character in "The Young Savages" was visually inspired by Salvador "The Capeman" Agron, 16-year old gang member of "The Vampires" street gang, and killer of two other 16 year olds (Robert Young Jr. and Anthony Krzesinski) at a Hell's Kitchen playground in New York in 1959.

Both Evan Hunter and the screenwriters behind "The Young Savages" (Edward Anhalt and J.P Miller) reversed the ethnic backgrounds of the victims and the accused (and convicted) killers, and changed the handicap of the victim ("Raphael Morrez" in the book, "Roberto Escolante" in "The Young Savages") but the details of the real-life cases were mirrored in both the book and the movie.

However, "Death Penalty" does reference "The Young Savages" in a scene where the D.A.'s office is reading an editorial about the gang killing, and the editor refers to the teen gangs as "Young Savages."