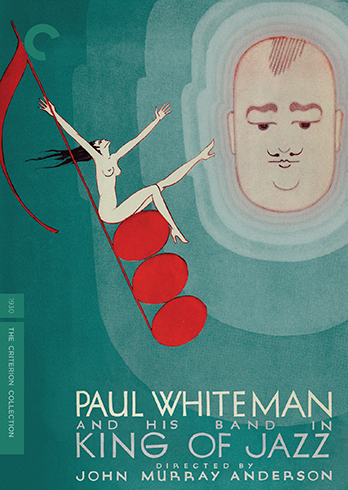 Released a year into the Great Depression, the 1930 musical revue King of Jazz was a major flop. The poor box-office showing nearly crippled Universal Studios and exiled the movie to obscurity and neglect, only to be restored nearly a century later thanks to an ever-growing cult of devoted film lovers. And watching the newly minted Blu-ray of this big-screen variety show, it’s easy to see where the adulation comes from. Shot in two-strip Technicolor by Broadway mainstay John Murray Anderson (with a little advance footwork by Lonesome-director Paul Fejos), King of Jazz remains a visual wonder, complete with extravagant dance routines, creative special effects, and even the first-ever Technicolor cartoon, directed by Walter Lantz, who would go on to create Woody Woodpecker.

Following the format of other movie revues--meaning, King of Jazz is a collection of musical numbers by a variety of acts, interspersed with short comedic skits--Anderson builds his film around Paul Whiteman, an esteemed band leader, utilizing his orchestra and other stage acts that performed with them. Notable among these is the Rhythm Boys, featuring a young Bing Crosby, here making his film debut (albeit one cut short by his bad boy behavior). Anderson’s conceit is that we are peering into Whiteman’s impressive scrapbook of musical history, with each new song or performance being a turn of a page. 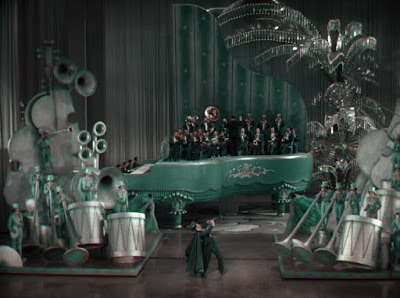 This could have meant for a rather stodgy presentation, but the impressive thing about this early movie musical is how Anderson and the performers alter their acts to fit the cinema screen, rather than playing for the stage. For instance, in the “My Ragamuffin Romeo” number, we witness the dangerous physicality of the dance up close, with the male dancer (Don Rose) tossing the female dancer (Marion Stadler) like the ragdoll she’s meant to be playing. Her head comes dangerously close to the floor on multiple occasions, and the thrill here is how her limber agility makes us fear for her well-being. In a live theater, they might have been able to play it safer, the distance of the audience aiding their illusion; on film, no such cheat would work.

As joyous a viewing experience as King of Jazz may be, new audiences should likely adjust their expectations before pressing play. Most likely the music here will not fit your preconceived notion of what classifies as jazz. Whiteman’s Orchestra represents the most mainstream of mainstream jazz from the time, a kind of orchestral take on the Big Band model. The bandleader’s position as “King” is highly dubious, and one can’t wonder how aware the filmmakers were of that at the time, given that the cartoon segment meant to explain how he got the name ends on the joke that it’s based on a crown-shaped bump that grows after Whiteman is conked on the head. The irony of the “King of Jazz” being a dude named “White man”--who looks like Oliver Hardy’s less hip older brother--will be lost on few, and it’s impossible not to notice that very few people of color--a Mexican singer and a little African American girl--appear in the movie. Or that a dancer photographed in the dark, his features hidden by costume and make-up, performs a “voodoo” number. Or that the final number features a bunch of different European cultures jumping into a melting pot, emerging as one shade of gold, to form American music. 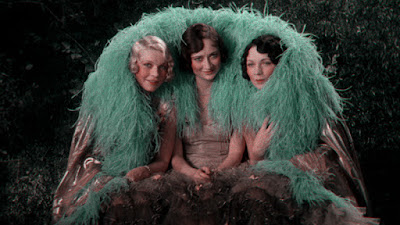 That said, the quality of performance is unimpeachable, and Paul Whiteman’s bonafides are pretty secure. The conductor did do a lot to popularize the culture and give a showcase to many talented performers. Perhaps most impressive, though, is that George Gershwin wrote “Rhapsody in Blue” for the Paul Whiteman Orchestra, and the legendary tune is reprised here on a fantastic set piece, featuring a blue piano so big that it fits the full orchestra inside it and requires five different stand-ins for Gershwin to cover all the piano keys. It’s here that you can really start to see how King of Jazz is a snapshot of the time, capturing a theatrical collective that might have otherwise been lost to the ages. 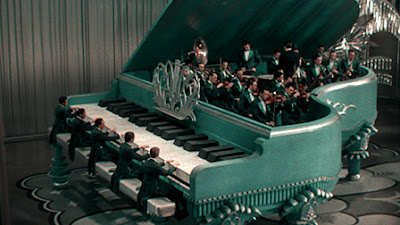 Really, were they to remove the word “jazz” from the title, there would be little quibble about. King of Jazz works as its own thing, as evidenced by the 1929 All Americans short that features a different staging of the “Melting Pot” routine. Less extravagant, and more direct in black-and-white, All Americans is almost like a proof of concept for Anderson’s full-length feature the following year. The earlier version (directed by Joseph Santley) is almost as effective as the colorful redo. It’s one of several shorts included on the Criterion Blu-ray.  The most significant of these is probably 1933’s I Know Everybody and Everybody’s Racket, which features both a performance by Whiteman and his Orchestra and also a post-Crosby Rhythm Boys. The short itself is fairly unremarkable. It’s a comedy centered around a night out with charmless newspaper columnist Walter Winchell.

In addition to these live-actions shorts, there are extra comedy bits from a re-release version of King of Jazz and two Oswald the Lucky Rabbit cartoons that repurpose the animated sequence from the movie. You’ll also want to be sure to read Farran Smith Nehme’s essay in the accompanying booklet to get the full lowdown on the history of the movie, from development to failure to rediscovery. 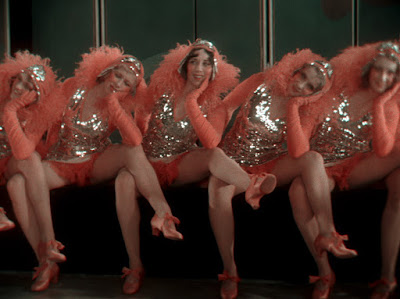 The right light is important for any wedding! Regardless of the time of day your reception takes place, the lighting you choose should foster both warmth and invitation. jazz band and vintage band