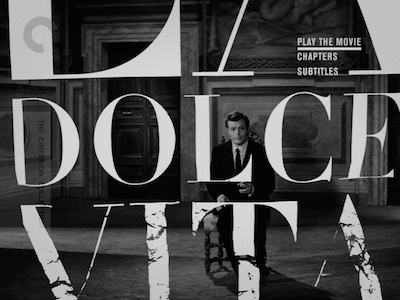 There are many scenes in La dolce vita that get referenced over and over, including its bizarre ending and Anita Ekberg’s famous dance in the fountain. But there is none more indicative of the impact of Federico Fellini’s 1960 motion picture than its opening sequence: a helicopter flying a statue of Jesus high above Rome. Up in the whirlybird sits Marcello, as played by Marcello Mastroianni, a reporter who peddles gossip, a prince of the Italian nightlife. As bikini-clad women look up past the towering Christ, Marcello waves down at them and asks one for her phone number. Our hero has arrived. 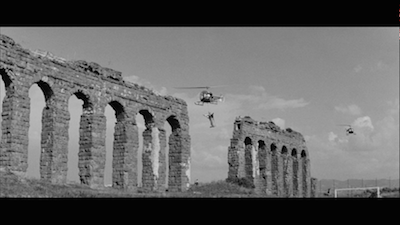 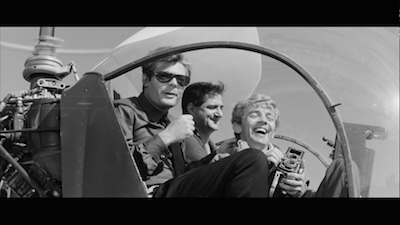 Grappling with La dolce vita for analysis is a daunting task. Fellini’s film has a large reputation, but you’ll find that when watching La dolce vita, the reputation is inadequate. The movie itself is larger still. It encompasses so much, yet does so with such clear storytelling and verve, one barely knows where to begin. Slicing off a piece to investigate feels trivial; La dolce vita is an uncarvable whole. It embraces and critiques modernity, celebrity culture, the nouveau riche, religion, business, art, ambition, and ennui. It is more vital more than half a century later than most films released today and set in the here and now. In fact, watching it in 2014 and considering how much Fellini’s Rome resembles a more sophisticated version of our own culture of decadence and scandal, it’s hard not to feel like we are all a bunch of rubes. The Italians did it so much better, and so long ago, and wearing much better clothes. 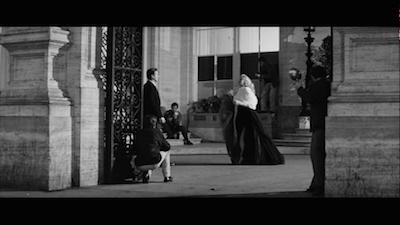 The plot of La dolce vita follows Marcello over several days as he navigates endless parties, difficult romances, and even tries to get a little work done. As we’ll learn, Marcello is somewhat of a gossipmonger, at once proud of it and defensive of the work, while secretly mourning the abandonment of his own literary pretensions. Folks remember him as a serious young writer, he prefers not to remember much at all. When Marcello describes another character, he may as well be describing himself. “Maybe he was just afraid,” he says, before clarifying, “Maybe he was afraid of himself, of us all.”

That the man being discussed is the perpetrator of a murder/suicide where he killed two small children before turning the gun on himself should tell you how deep and dark this fear goes. As Marcello had said earlier of his city, it’s a “peaceful jungle,” but it’s a jungle all the same. Wild and fun...until it’s not. 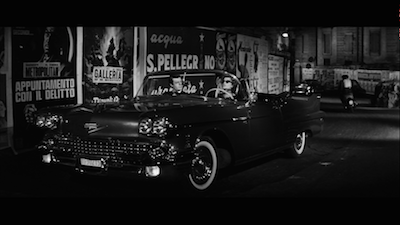 Which isn’t to say La dolce vita is a dour affair. Even when the drunken fatigue sets in, it’s still buoyant and flashy. And, of course, before that, we are along for the ride, partaking of the spectacle right along with the charming rogue who serves as our guide. The first half of the movie is almost entirely on an upswing. Marcello canoodles with the wealthy heiress Maddalena (Anouk Aimée, Lola [review]), he frolics with the Swedish actress who is turning everyone’s head (Ekberg), and he wends his way through nightclubs as if he owns the joints. Like Ray Liotta in GoodFellas

, doors open for him. His only real trouble seems to be the tumultuous relationship with his fiancée Emma (Yvonne Furneaux, Repulsion [review]). Emma is a manipulative drunk, and Marcello’s philandering drives her to attempt suicide as a way of getting his attention. Yet, for as contemptible as that is, Emma is indicative of the sickness that is in the air. She is the consequence of this lifestyle of no commitment. Marcello envisions setting down as a kind of deathtrap, and so he keeps the woman he is to marry at arm’s length, in much the same way he holds off his own talent. The Roman partiers are like swifts, the birds whose legs are too weak for them to land and ever take flight again. They must stay up high or come down for good. 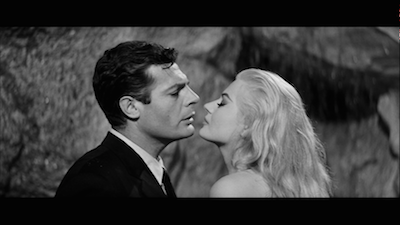 Fellini constructs La dolce vita almost like one would a musical. There are certain anecdotes he shares, and then he connects them with song-and-dance numbers. These all take place at the nightclub, and include clowns--one of the director’s passions (see his film I Clowns [review])--who offer a bit of commentary through their routines. Marcello sees himself reflected in the sad buffoon. He and his friends are like the comedic performer’s balloons, airy and insubstantial, following a pied piper to goodness knows where.

I mentioned above that we can see our current culture reflected in La dolce vita. This is true be it in the grisly violence (in addition to the murder/suicide, there are references to domestic abuse) or the press’ obsession with the same. The scenes with Paparazzo (Walter Santesso) are so familiar, the legions of photographers that hound celebrities and public figures have taken their name from the character. If there is any one character that we might be, however, whose shoes we might understand walking in, it’s Marcello’s father (Annibale Ninchi). He doesn’t live in Rome, and on a rare visit, he goes out with his son, partakes of his life, and finds it’s too much for him. Like us, he is the casual observer who can only become engorged on the experience rather than be a part of it. 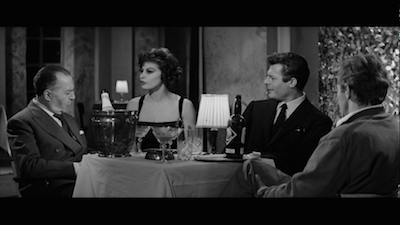 The contrast between Marcello and his father ties in with other generational divides that Fellini shows us. Not long after, Marcello is at a party in a castle (which he goes to with future Velvet Underground-singer Nico, who is playing herself) that has historical significance far beyond the way the man who is set to inherit it treats the estate. His mother and his father both chastise him, unable to understand how the younger Italians can be throwing away history with such ease. It’s also the site of La dolce vita’s most tender and saddest scene, when Marcello confesses his true feelings to Maddalena, only to lose her in the moment even more than he realizes, an unseen cuckold ridiculing his raw emotion. 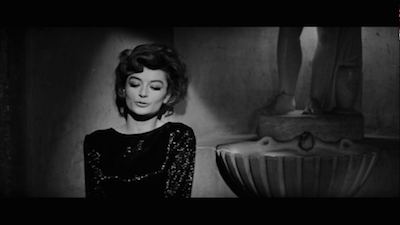 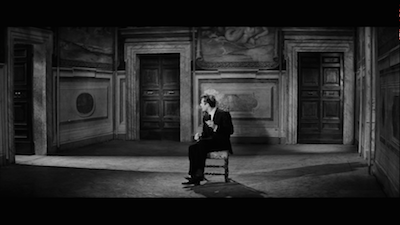 By that point, though, Marcello’s defenses are down, and his own nausea (as Sartre might call it) has begun to settle in. His father’s excess was contagious, and after tat particular outing, the fun slowly drains from Marcello’s life. Each successive soiree grows more somber, ending in the bad party to end all bad parties, Marcello engaging in a sad cabaret of his own to try to reignite the musical element and keep the festivities going.* It’s a lurid display, and mean-spirited, and mostly directed at his own disgust with himself. He can no longer deny the bitter irony of Maddalena’s words back when things between them were good: “It’s not so bad. So few of us unhappy people remain.” It’s the truth in opposite. It is that bad, and everyone is unhappy. 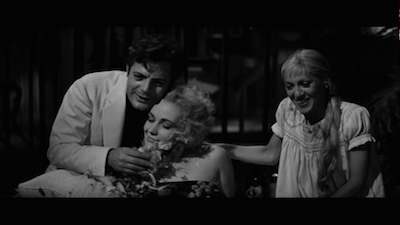 Which is why Marcello finds himself where he is at the end, staring at the bizarre sea creature that has been drug up on the beach, his friends unable to appreciate this monstrosity with the appropriate shock or grandeur. It’s a kind of call back to earlier, when the revelers were listening to a friend’s recordings of nature, and nonchalantly declaring, “Birds. That’s exactly how they sound.” They are so deep in their own false constructs, they no longer have any connection to the natural world except as something abstract that can be trapped and held in some way. As the movie closes, Marcello sits between the aquatic behemoth and a little girl who previously told him of her own modest ambition. He is caught between something unidentifiable and grotesque and something pure and hopeful, and Marcello can’t recognize either. So he just carries on with what he’s doing. 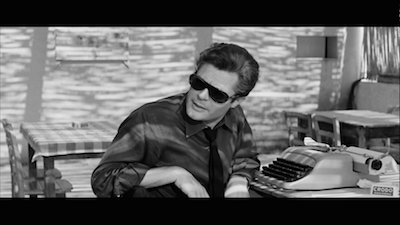 Ever the master illusionist, Fellini presents all this as if it were a spontaneous happening, without any structure, as unpredictable as the behavior would appear. This is false, of course, that’s part of the trick. The mirrors and the wires must remain invisible. As a piece of Italian cinema, it’s an expansion of possibilities, a fully widescreen endeavor. There is a joke in the movie when someone asks Anita Ekberg if Italian Neorealism is dead. Her translator doesn’t bother to translate the question, he just quickly tells her to say it’s alive. Fellini is, of course, being cheeky, because La dolce vita is moving beyond Neorealism into something more like hyperrealism, a style more appropriate to the changing times. Fitting, then, that Otello Martelli, who also shot such Neorealist classics as Paisan [review] and Stromboli [review], should be behind the camera for this one, allowing Fellini to keep one foot in tradition while remodeling cinema for the future. 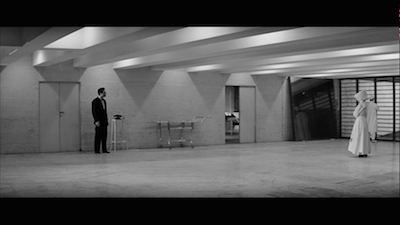 If you’ve been waiting to visit La dolce vita again, or have yet to partake at all, there is no better time than now. After years of inadequate DVDs, Criterion brings us a full restoration, shown in splendid high-definition, struck from a 4K master. The picture is marvelous, with a pristine surface image and just the right amount of grain to maintain the cinematic feel. There are also a ton of extras celebrating La dolce vita, including a tour through one man’s collection of ephemera relating to the movie and interviews both new and old. 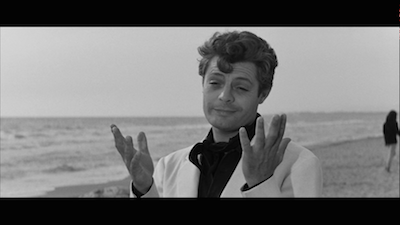 * Does anyone else think of the scene in Mad Men where they are riding the lawn tractor at the office party when Marcello mounts the drunk farm girl?