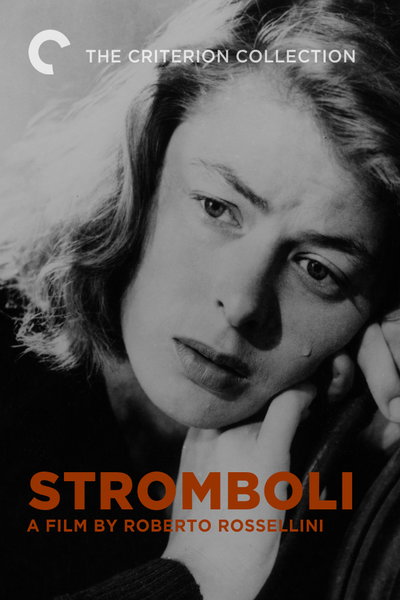 Stromboli, the first collaboration between Italian director Roberto Rossellini and actress Ingrid Bergman, is still, even sixty years later, overshadowed by the real life drama and romance that erupted during its filming. The 1951 picture is where a long-term relationship began between the filmmaker and his married star, one that would prove fruitful both artistically and in the family way. The resulting scandal was used against Bergman, a victim of the mores of her time, and Hollywood, the paragon of moral virtue that it is, shunned her for several years. At least until box office receipts and acclaim swung her way again (specifically, the success of Anastasia

). Then Ingrid must have been shocked by how many friends she really had!

It's easy to see what would attract an actress to a movie like Stromboli, and by extension, the man who afforded her the opportunity. Stromboli, in both style and script, is designed to showcase the lead performer. It's Bergman’s triumph or failure to have, depending on how well she does her job. 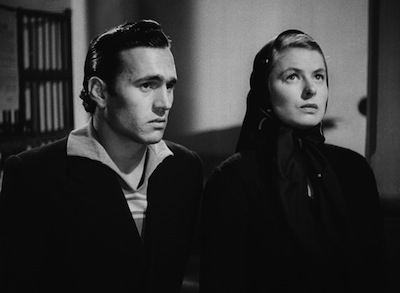 The Casablanca star takes point here as Anna, a Lithuanian whose flight from the Nazis in WWII landed her in an Italian prison camp. There she returns the flirtation of Antonio (Mario Vitale), a prisoner on the men's side of the jail. He woos her through the fence. Since Antonio is an Italian citizen, becoming his wife is Anna's ticket to freedom. As a refugee, she just has to prove that she has somewhere to go and won't be a burden on society.

Antonio's home isn't much better than the camp, however; he takes her back to the Sicilian island where he grew up. Stromboli is a harsh and unforgiving place populated by harsh and unforgiving people. The locals get by on fishing and religion, the only options they have trapped on a rocky landscape where nothing else will grow. Their bounty comes from the sea. Indeed, one could even argue that the earth does not want them. The island has a volcano at its center, and the mountain’s angry rumblings regularly send the citizens scurrying for safety. 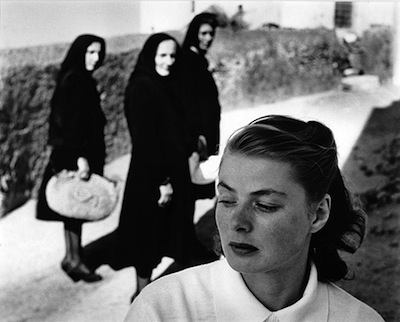 Anna gets on poorly in her new locale. She is bored and lonely. The elder men on Stromboli take a liking to her, but the self-righteous women find her both shameless and shameful. Antonio also has a violent, jealous streak. Though how he expresses his suspicion can be appalling, he has good cause for concern: Anna does tend to flirt with other men on Stromboli, and most obviously with the rugged lighthouse keeper (Mario Sponzo). It's not really lust, though, much less love--it's an attraction of convenience. One can surmise that she has gotten used to seeking out men who can ferry her to safety. Any willing body will do, it doesn’t take a man in a tower to illuminate her way. In Stromboli's most uncomfortable sequence, Anna makes a move on the island preacher (Renzo Cesana). Her seduction technique is to be a helpless close-talker, invading his personal space and chasing him from the room.

This, of course, only fueled the pious chatter--not just in the movie, but outside of it, as well. Never mind Stromboli's decidedly pro-God finale where the brazen woman redeems herself. Anna, pregnant and afraid for her future, seeks an exit. Her flight from Antonio leads her on a walk along the volcano's treacherous perimeter. She strolls through its sulphurous belches like a woman on a foot-journey through Hell. The symbolism is unequivocal and unavoidable: she comes out the other side to discover heretofore-unknown beauty. It inspires a love for her adopted home, as well as a verbal declaration of her commitment to the divine. It's basically the ending of Gone with the Wind

. I didn't find it entirely convincing. The conclusion is really the only time when Bergman grandstands, and it's all the more jarring following her emotionally fraught trek through the island's gaseous emissions; otherwise, Ingrid Bergman mostly manages the right contrast between showy modernity and capitulation to the old-fashioned ways of the island folk. 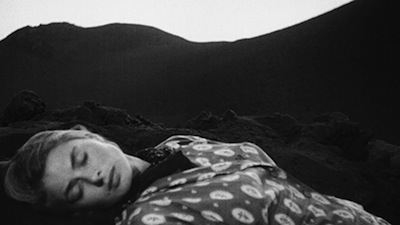 Rossellini is likewise seeking a similar contrast between this European woman, his Hollywood star, and the real-life islanders that basically are living their lives for his camera. Stromboli is a notable realization of the post-War Neorealist aesthetic Rossellini helped to invent. The desolate locale is given life by its determined citizenry, and the director smartly lets his narrative take a backseat when the particulars of their everyday existence are more interesting than the scripted events. The most riveting portion of Stromboli is the extended fishing sequence where the men haul in a massive catch. It's wet and chaotic, and at times brutal. Stromboli showcases a healthy respect for the natural order in all of its cruelties. There is a way things are done, a way the food chain keeps functioning. Antonio tries to show Anna how things work out there in the wilderness. He lets a ferret loose on a rabbit, and it horrifies her (as it may horrify you, too). She is shown as a woman who wants life's luxuries, but she doesn't want to see how they are acquired. Her aversion to seeing where food comes from is analogous to how she survived the War--by staying out of it.

Rossellini is juxtaposing the staging of cinema with the unpredictability of true life. A glamorous personality and a musical score are no match for the weather-beaten faces of the villagers or the tumult of land and sea. Anna must accept her place in the flow if she's ever going to be free, otherwise she will doomed to an eternity of struggling against it. Stromboli plays Friday, July 5, at 7pm, and again on Sunday, July 7, at 3:30pm, as part of the NW Film Center's presentation of "The Solitude Trilogy." View the full schedule here.

The main character is, I believe, Karin.