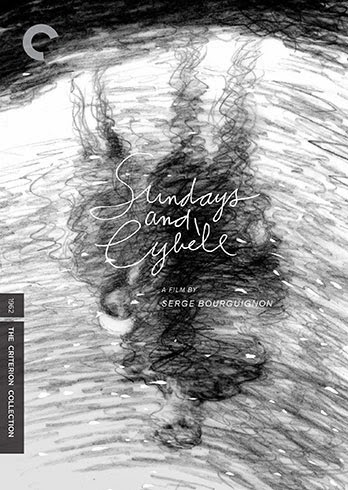 Serge Bourguignon's Sundays and Cybèle, a 1962 drama that went on to win the Best Foreign Language Oscar the following year, is a unique movie. The only other film it brings to mind is René Clément's Forbidden Games, the tale of two young children living in hiding during World War II, only Sundays and Cybèle is set in peacetime and one of the children has been swapped out for an adult. Regardless, Clement’s remarkable film is excellent company to be in.

Hardy Krüger stars in Sundays and Cybèle as Pierre, a traumatized soldier who has returned from combat with no recollection of who he is and a vague feeling he did something terrible to earn this affliction (we know more than he does, having seen some of what went down in a stylized, dream-like flashback). Pierre lives in a remote French town with Madeleine (Nicole Courcel), a nurse who fell in love with him while he was in the hospital. She gives him a place to stay and tries to encourage his recovery, letting him spend his days in convalescence. He kills some time working for a local artist (Daniel Ivernel), wanders around looking for clues to his identity and trying not to be waylaid by his chronic vertigo. 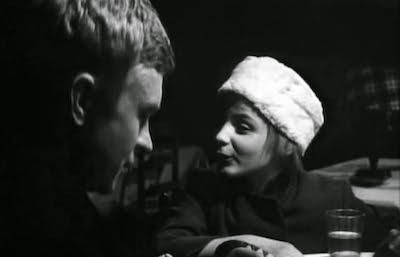 Things change when Pierre meets Francoise (Patricia Gozzi) and her father at the train station one night while he’s waiting for Madeleine. The girl is being dropped off at a nunnery, and when Pierre finds out the father has no intention of returning to visit her, he decides to look after Francoise himself. The girl is allowed to leave the school every Sunday, and so she and the older men start meeting each week. Francoise’s mother is dead, so without this man posing as her dad, she'd have no one. She swears her love to Pierre and promises to marry him when she is eighteen. The one thing she won’t do, however, is tell him her real name. It’s a secret. The nuns have started calling her by a French name because they don’t like her birth name, which is Greek and has connotations that are not Christian. They rightly understand that names are power.

The subject of an adult and a child finding kinship in itself is not controversial (consider, for instance, Claude Berri’s The Two of Us [review]), but Sundays and Cybèle walks a provocative line. It makes no bones about the closeness of the twelve-year-old girl and her troubled thirty-year-old companion. While the two never cross the line into anything sexual, there is a physical affection between them. They are essentially playacting. They are two orphans playing house. How their friendship is interpreted depends on how they are observed. The act of watching is what Bourguignon is inviting us to partake in, and he crafts Sundays and Cybèle's visual language to emphasize this. 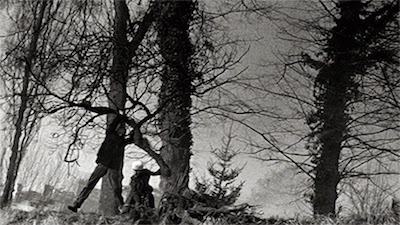 Pierre often appears encircled or framed by objects that draw our eye in his direction and isolate him simultaneously. At other times, he is observed from extreme vantage points, looking up or down. In one intriguing shot, we spy him from the side mirror of a passing vehicle. These images have the dual effect of encouraging us to consider a different way of viewing things, but also of containing him, as if bringing focus to his scattered thoughts. The shapes are often circular, reflecting Pierre's vertigo, but they are also an important clue to Pierre's past, repeating patterns buried in his subconscious. These things are indicative of the future, as well, the act of seeing through the circle intended to remind us of the crystal ball Francoise mentions belonging to her grandmother. When Pierre sees an actual fortuneteller mid-way through Sundays and Cybèle, she has little to say. Yet, he so believes in her powers, Pierre steals a magical dagger from her, believing it will provide access to another world. 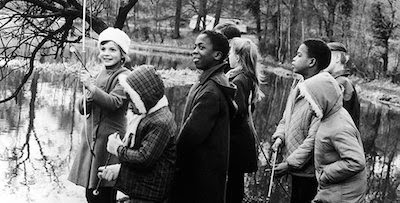 Bourguignon offers up various conflicting visions of Pierre. The man who doesn’t even know himself contains multitudes. In one scene, he is like St. Francis of Assisi, innocent and kind, with birds perched on his shoulder and head. Of course, it's also ironic that Pierre is standing in a giant cage that he has built around himself, and that he will soon step out of, leaving the birds behind. Later, Madeleine will realize her own predicament, that she has also built an emotional trap with herself at the center, while walking around the studio where that and other cages have been kept. In her moment of epiphany, she is flanked by one such cage, as well as its shadow, the image blurring behind her, appearing like double vision. Like the two different Pierres. 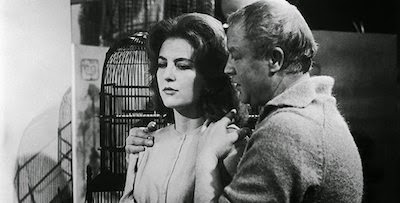 Because for as benign and childlike as he can be, Pierre can also appear monstrous. In some of the nature scenes--trees and water both frighten him, the stuff of dark fairy tales--I am reminded of Boris Karloff playing Frankenstein's Monster

. Pierre is almost too brutish, too unaware, the girl must teach him how to behave, her purity standing in relief to his--though her own innocence is balanced by the mature trappings she adopts as self-preservation. The scenes are strikingly familiar. They throw things in the water, she plays dead and let's him carry her, etc. Consider this in direct contrast to the man on the horse that Francoise imagines as a kind of romantic hero, capable of the chivalry she'd push Pierre toward, but that we fear he is not equipped for. Even when he takes the sorcerer's dagger at the carnival, when he walks away with it concealed under his jacket, Bourguignon places a knight's armor in the background, in our eyeline if not Pierre’s. The knight doesn't readily have a sword, but if he did, its size and sharpness would surely put Pierre's illicit dagger to shame.

Carrying on with this idea, Francoise abhors brutishness. She despises Pierre for hitting another child when he's jealous, and she is also frightened to see him in a drunken brawl, itself spurred on by his reacting with an open hand to a kiss from his ersatz girlfriend. The warrior frozen in the moment of his greatest shame and defeat can only react with force. 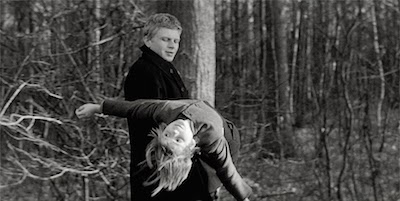 Both Krüger and Gozzi are exceptional performers. The tricky thing about their roles is that the are basically swapped. Krüger is playing, for lack of a better description, a kind of dimwitted manchild, a beast who needs taming; on the other hand, Gozzi is a kid who has had to grow up too fast. Hers is the more delicate balancing act, because she must also maintain a certain naïveté. Francoise is still manipulative and selfish, the way a child would be, even as she invents adult scenarios for the two of them. The young actress actually looks like a middle-school version of Juliette Binoche, and frankly, shares some of the talent, as well. Her ability to be so emotionally open is incredible, while Krüger ends up being equally impressive for his restraint. The actor makes Pierre's hurt and confusion visible without pushing toward Of Mice And Men

territory. His difficulties seem genuine, and not an impression.

There is much debate from other people in the town over the appropriateness of the relationship between the man and the girl--though not all of it serious. Bourguignon creates quite a bit of comedy out of how the other townspeople observe them on their own Sundays out. Some, such as the couple who refer to Pierre as a "satyr," are rather nonchalant about the creep factor; others not so much. This will ultimately be the downfall of their union. If a magic spell is being cast, it can only last so long. Indeed, the film ends at Christmas, and shortly after Francoise has revealed her true name (spoiler: it's in the title). She writes it down on a piece of paper and puts it in a box and gives it to Pierre as a present--another act of magic. To know a spirit's true name is to possess that spirit, something you should keep in mind when you get to the final scene. (That I won't spoil.) 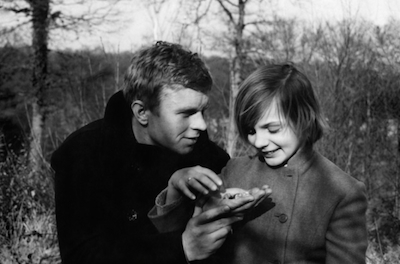 These differing points of view are meant to challenge our own perceptions of this relationship. That's the daring thing of Sundays and Cybèle, that Bourguignon would dare to confront what is "normal" and suggest that maybe the more disgusting implications of the pairing only exists because the common folks project those possibilities onto it. Because, really, aren't these just two people who need one another? Their bonding method is unsettling in its way, but no moreso than the sad fact that it's a shame that the world has only given us more reasons to be suspicious in the years since Sundays and Cybèle was first released. The movie’s central difficulties aren't easy to dismiss, but then, neither are all the other possibilities the script raises. Nor can one ignore the honesty of the emotions on display, which is what makes Sundays and Cybèle so genuinely intriguing. 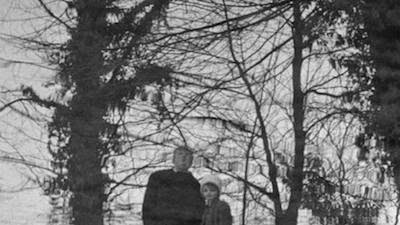