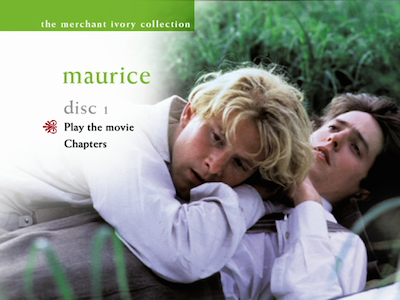 It’s kind of funny that I first saw James Ivory’s 1987 adaptation of E.M. Forster’s Maurice back in my college days, because rewatching the movie some 20 years later, I realize that Maurice somewhat illustrates what was my father’s worst nightmare at the time. In the early 1900s, young Maurice (James Wilby) went to Oxford where he was exposed to radical ways of thinking that made him doubt his religion while also opening up his understanding about his own sexuality, leading to clandestine dalliances with one of his school chums (Hugh Grant) and basically allowing Maurice to embrace his dormant homosexuality.

It’s like all the liberal education bogeymen that haunt conservatives have crawled out from under the dormitory beds. 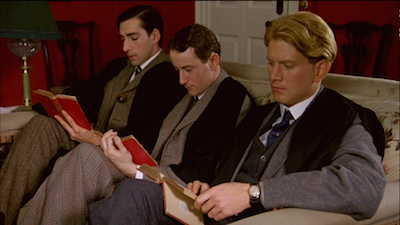 Of course, to blame Oxford for transforming Maurice is to miss the truth of Forster’s story. At one point, when arguing with his mother about his changing opinions, Maurice defends himself by basically saying, “This is who I am. I am not my father, I am me. I was made this way.” Though dear ol’ mum has no idea that her child is queer, the coded language of the exchange could not be more clear, or more potent. Despite the progress made in the century since Forster published his then-controversial book (homosexual acts were illegal in England, as illustrated by the arrest of another of Maurice’s classmates), or even since Ivory’s film was released, well ahead of the indie revolution of the 1990s that helped give queer cinema a new platform, opponents of gay marriage and the regular appearance on our Facebook timelines of stories about kids coming out to intolerant parents have sadly allowed Maurice to remain contemporaneously relevant and not just a document of a certain period of history. 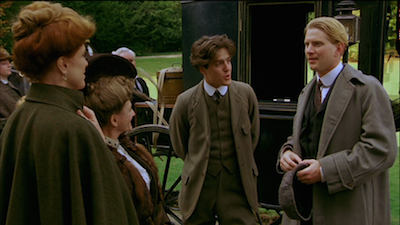 But then, good stories never lose their punch, and Ivory and co-writer Kit Hesketh-Harvey find the essential emotion in Forster’s tale of a naïve, upper-middle class student having his eyes and heart opened to the world. Maurice is both sensitive and insightful, finding the universality of coming-of-age coming-out stories and detailing how internal shame and external prejudice affect the individuals who suffer from them. Maurice and Clive (Grant) find friendship and then love in college, but family demands and social persecution push them apart. While Clive gives in and gets married, Maurice struggles to maintain his secret life, while also carrying the torch for his first romance. Eventually, he finds affection with one of Clive’s groundskeepers, Alec Scudder (Rupert Graves), but that also has its own complications. 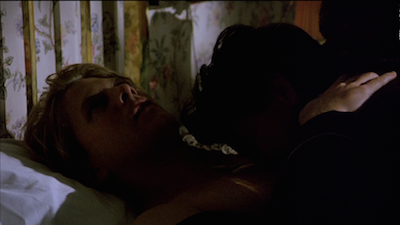 One thing that is both timeless and universal in Maurice’s difficult early adulthood, and one that most adolescents can relate to be they straight or gay or whatever, is feeling like an outsider. Maurice’s most palpable and familiar trait is the air of the different. Be it religion, class, or social mores, Maurice is always on the outside. Because he doesn’t fit in what might be considered the most elemental of manly roles, he ends up finding comfort in little else. Unable to accept himself, he rejects religion, education, and the more humiliating aspects of societal expectation. Not apologizing to his headmaster for sneaking off with his lover allows Maurice a rebellion only he understands. He’d rather draw an invisible line and be tossed from school than reject what he’s found. Naturally, this position is hard to maintain, but one that Maurice must find the strength to carry on with, because the more he gives in to expectation and tries to get along, the more he struggles and the less happy he becomes. Things flip when he exploits another for his desire, indulging with the servant Scudder...though there is some question of who is exploiting whom. Forster has quite keenly observed that the oppressed can easily become the oppressor, and they can also be taken advantage of for the same. 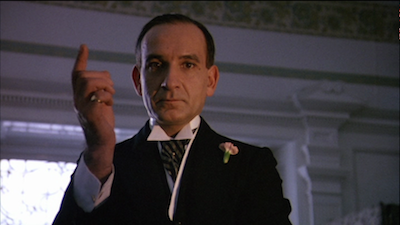 Maurice also illustrates how certain hokum has always held sway and may never go away. Ben Kingsley shows up for a couple of scenes playing a hypnotist Maurice hires to divest him of his forbidden desires. This has about as much success as religious groups who think that homosexuality is something that can be cured through rehabilitation and prayer. Attempts to repress one’s true feelings tend to only give added strength to their triggers.

Such a delicate story requires a delicate touch, and Ivory is well suited for it. I’ve noted in the past that part of the Merchant Ivory appeal is a near absence of style, and Maurice shows the team at their most Masterpiece Theatre-like. There is little to distinguish this film from any variety of BBC literary dramas, except maybe the sexy love scenes between Grant and Wilby and Wilby and Graves. It’s certainly not the kind of thing one expects to see in a TV miniseries based on Austen or Dickens. There’s something normalizing, however, by approaching these couplings with the same even keel as Ivory and cinematographer Pierre Lhomme approach everything else. Theirs is nearly invisible cinema. There are no sweeping pans or emphatic zooms to underline emotion. Rather, Ivory allows for character and setting to maintain the spotlight. A meeting in the woods, or ducking from a rainstorm--these are tropes from romance novels, but also just the stuff of life and circumstance. When it comes to describing the films of Merchant Ivory, “plain” is not pejorative. Much in the same way an author might use clear language to make sure there is no confusion amongst his readership, Ivory leaves the flourishes to happen within the scene, even as he encourages his performers to adopt a like-minded restraint. Seeing a young Hugh Grant be dashing without mugging for the camera is a good reminder of why we all actually liked seeing him in movies once upon a time. 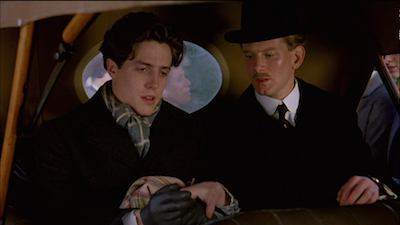 While this poise and reserve means James Ivory is considered by some to be the most quintessentially British of directors, the truth is that he’s an American who actually grew up and went to college in Oregon, from whence I currently hail. This connection is what prompted me to give Maurice a spin, as on Friday, October 10, Ivory will be appearing at the Hollywood Theatre in Portland to present Maurice as part of the Mid Century Oregon Genius series.

It’s a rare appearance, and to go along with this screening, Ivory has also chosen to air his rarely seen 1977 film Autobiography of a Princess, starring James Mason and available on Criterion’s OOP Heat and Dust DVD. The filmmaker selected Princess as complement to Oregon-native James Blue’s The Olive Trees of Justice showing later the same day and followed by a panel discussion focusing on Blue’s filmography.

For details on all of these showings, visit the Hollywood Theatre website. 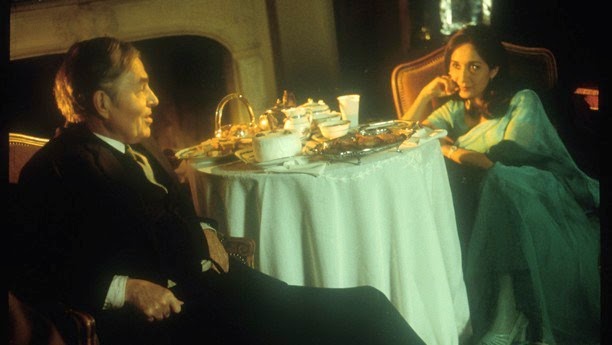