In a cinematic universe where so much of what makes it into theaters is commodified and homogenized to fit into recognizable norms, one must celebrate genuine, individual voices like Jacques Demy’s. His signature films are truly unmistakable and like no other, something it won’t take new viewers long to ascertain once they start working their way through Criterion’s The Essential Jacques Demy boxed set.

Even in his first film, Lola, released in 1961, when the auteur most resembles his Nouvelle Vague contemporaries, there is still something uniquely Demy: doomed romanticism born of a bittersweet love affair, characters too wrapped in themselves to fully surrender to another, but told with such virtuoso technique, there’s a bit of everyday magic akin to a fairy tale. 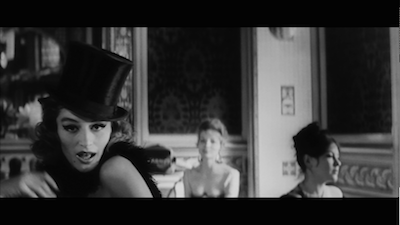 Lola, which Demy wrote as well as directed, takes place in a small French town over approximately 36 hours. It has several criss-crossing stories, though the connector between them all is Roland (Marc Michel, playing the same role he will pick up again in The Umbrellas of Cherbourg [review]). Not coincidentally, one assumes, the hero here shares his name with that of the knight in the great French poem. In The Song of Roland, Roland dies from blowing too hard on his trumpet; in Lola, the lover’s folly is in the shape of a child’s horn, bought for the son of his lady even after a rival has beat him to it. 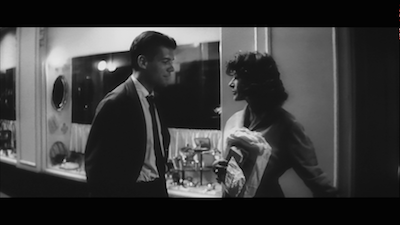 Roland is a gadabout who can’t hold a job and broods over the way his life became derailed after serving in the War. (They don’t specify which, though he seems too young for WWII.) A chance meeting with a young girl and her mother (Annie Dupéroux and Elina Labourdette) reminds Roland of his childhood love, who shares similar looks and the same name as the teenager Cécile. Roland’s lost paramour now calls herself Lola, and she works at a nearby dancehall, strutting with sailors, to support her and her son. Like Roland, she has lost a love, but in this case her child’s father, Michel (Jacques Harden), who disappeared prior to their son’s birth. Connecting everyone further, Michel is the son of one of Roland’s neighbors. 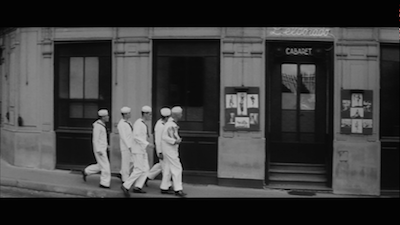 Coincidence fuels the narrative here. After Cécile, Roland then bumps into Lola, and they rekindle their relationship despite the years apart--at least as much as she will allow. Cécile likewise runs across Frankie (Alan Scott), an American sailor in love with Lola, who looks similar to how she describes Michel (tall, blonde, etc.). Meanwhile, Cécile’s mother wishes Roland would take notice of her--though even she harbors a broken heart and an exiled romance. There are layers upon layers to the potential relationships here. Young Cécile is maybe the most heartbroken of all, as both Roland and Frankie are grown up and forbidden fruit. Like Venn diagrams of the heart, these would-be mates cross over with each other only to cross back out into solitude again. 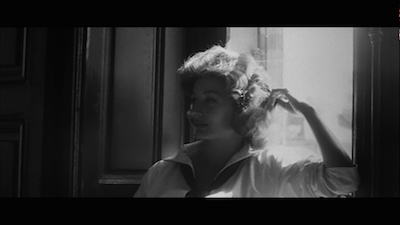 As the main object of affection, Lola is played by Anouk Aimée, who went on to work for Fellini in 8 1/2 [review] and La Dolce Vita. Aimée’s foxlike features and flighty performance both attracts and repels, at least when watching from the outside. Her chosen career makes her motivations often hard to discern. When are her emotions honest? When does she cover the truth with inconsequential chatter? Is she playing with the affections of others just to buy time? Her most unguarded moment comes midway through the film, after Roland has confessed his affection, and then reacted poorly to her rejection. Demy sees his heroine as more than just a pretty object for men to desire, but an example of what that desire forces women to do in order to survive. Lola pushes and pulls as necessary to maintain control, accepting the male gaze and bending it as it suits her. As she confesses when frustrated with Roland, she has never had a male friend, only would-be pursuers. It’s them who lie to her, pretending to care until the get what they want. 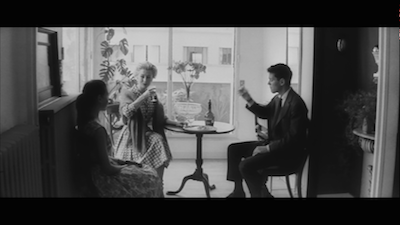 Demy masterfully juggles all of these various characters and concerns, letting them ebb together and then fall apart. He is assisted ably by cinematographer Raoul Coutard, who would be Godard’s go-to man throughout the 1960s, and composer Michel Legrand, who was essential to many films from the New Wave, but he had no relationship quite as pronounced as the one with Demy (Legrand orchestrated all but the last of the films in this boxed set). Legrand’s classical melodies lend an old-fashioned melodramatic flavor to Lola, whereas the themes of Demy’s script and the real settings, lit without flare by Coutard, keep the story grounded.

Demy is something of a woman’s director in that his actresses all fare better than his men. This could be by design. Frankie is a big lug, and Roland is a stuffed shirt, and perhaps Demy wanted them to be less than ideal. On the other hand, all of the actresses come off as alive and complex. Elina Labourdette is tragic and tired as Cécile’s mom, and Cléo from 5 to 7’s Corrinne Marchand is impossible to miss as Daisy, another dancer. Demy seems more fascinated by the women in most of his creations. Who can blame him? Men are such drips! 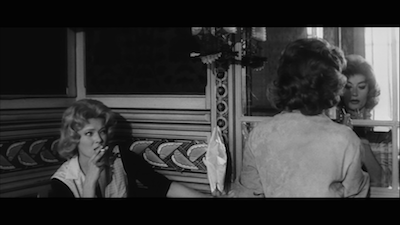 It’s fitting that the movie that leads The Essential Jacques Demy is also one I haven’t seen (the other is the last film, Une chambre en ville.) The new restoration is rather lovely, with a consistently pleasing filmic look. As this one was one of the more difficult to restore, it bodes well for the rest--which I’ll be covering in chronological order as swiftly as I can. Regardless, as a debut, Lola sets up the promise that other Demy films deliver on, both aesthetically and narratively, as well as the disappointment and heartbreak that is endemic to his best material. 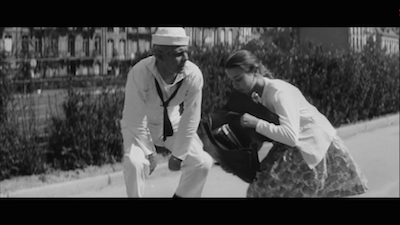 In addition to Lola, the first disc has four Demy short subjects spanning 1951 to 1962, with the last one being a segment about “Lechery” taken from an anthology film about the seven deadly sins. Of all of them, the earliest, Les horizons morts, best fits with the director’s early features. Demy actually stars in this silent slice of despair as a jilted romantic who considers ending it all. The documentary “Ars,” about the mythology surrounding a long-dead priest whose body never decomposed, also shows the filmmaker’s fanciful approach to mysticism and belief. He re-creates the clergy’s steps, using his camera as a point of view object, to navigate French streets as they were in 1959, but with the intent of discovering where they led this sainted figure. 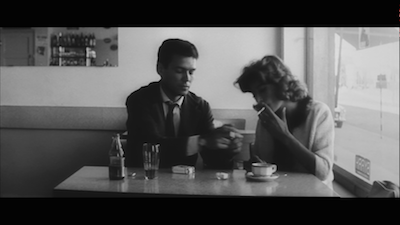 It's strange that you call Lola's restoration "lovely," as every other reputable Criterion reviewing sites have said that it's right up there beside Children of Paradise as Criterion's worst high-definition transfer.

I can only go by what I see and rarely pay attention to what others say about a particular disc. I didn't notice anything that drew me out of the experience. In comparison to other black-and-white movies I've watched lately, it struck me as conscientious and careful with the materials available. I know some folks have called it flat, but I wasn't struck as such; sometimes new eyes see things differently than those that are familiar with the movie, however, and if that makes me disreputable, so be it.

Oops, hit enter and posted before I could add my second paragraph...which was to say thanks for reading, though, and I do appreciate readers who politely keep me on my toes. :)