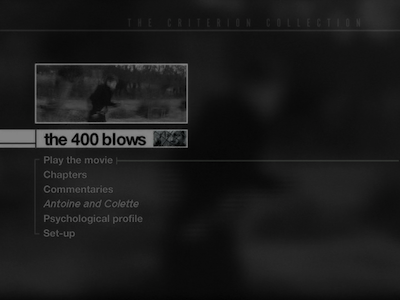 I've been meaning to undertake this project for a while. It's to my great shame that I have, as of yet, not ventured beyond The 400 Blows in Francois Truffaut's decades-spanning Antoine Doinel series. Though a revered and influential staple of French cinema, since the release of Criterion's The Adventures of Antoine Doinel boxed set several years ago, the films have waited on my shelf, eternally marked as "for later."

The idea has always been to have an Antoine Doinel summer. This was inspired, fittingly enough, by real-life circumstance that involved both youth and romantic folly. For a couple of years in the mid-00s, I worked in a mom-and-pop video store that specialized in less-mainstream fare. We had a popular "directors wall" where films were organized based on who made them. Most of the famous directors had sections. Featured artists were chosen based on their body of work and reputation. Some filmmakers, like Tim Burton, would lose their space after too many turkeys. The old guard, like Truffaut, however, had a permanent rack. 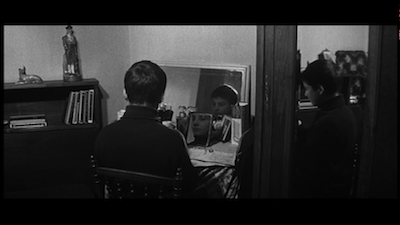 One summer, a college-aged girl and her mother came in and rented The 400 Blows and stated their intent to watch the Doinel series front to back as a joint venture over the girl's seasonal break. The girl had been in before. She was studying film and was friendly to talk to. She was also very attractive. We didn't have cards at the store, customers were stored in our database and rented movies by giving their name. Accounts could also have nicknames, and we would give them to customers who we wanted to remember because we liked them or because they were jerks. After conversing with this girl about her summer viewing plans, I changed her nickname to Truffaut. All the guys working there knew about her. She was very crushable. We weren't skeevy about it (or I hope not) but one always looked forward to being able to say "Truffaut came in today..."

There's more to this particular story, but I'll save it. I am guessing it might fit one of the later films. Or it will be the ending to my personal survey of The Adventures of Antoine Doinel. It only really has one other facet, and it ends in the summer of 2007, when Michelangelo Antonioni died. (It wasn't his fault; it just seems significant that it was the exact same time.) 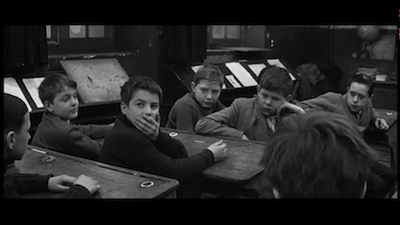 The 400 Blows is a film marking many firsts. It's the start of the series, but it's also Francois Truffaut's feature debut. Though the second picture for star Jean-Pierre Léaud--he was in an adventure movie directed by Georges Lampin--it was his first lead role. The young actor was 15 years old at the time, and The 400 Blows would set him off on a grand career--Léaud is still working, and recently had a memorable part in Le Havre [review]--but he will always be best known as Truffaut's double.

Antoine Doinel is a young boy growing up in Paris. He is an imaginative child with an active sense of humor and not much interest in his schoolwork. Antoine regularly gets in trouble with his teacher, whom he has nicknamed "Sourpuss," and his mother (Claire Maurier, Amelie) is at her wit's end with the kid. His father (Renoir-regular Albert Rémy) is a joker, too, and is for the time being more sympathetic to Antoine's growing pains. This balance will shift multiple times throughout The 400 Blows. The Doinels are not bad people, just inconsistent. 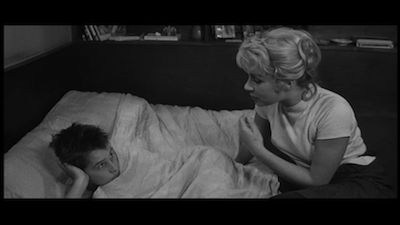 After several mishaps--including lying about his mother being dead to get out of being punished for ditching class--Antoine is suspended from school and, rather than go home and face parental wrath, he decides to run away and learn to make his way on his own. He hides out with his best friend René (Patrick Auffay), and they spend idle days scamming money and watching movies. Not a huge deal is made out of it, but mention is made that Antoine is obsessed with cinema. Random shots on the Paris streets regularly show him passing by movie theatres, and we catch brief glimpses of their marquees. The happiest time we see the whole family enjoy together as a unit is when they go out to see Jacques Rivette's Paris Belongs to Us. Mother, father, and son all debate its merits in the car on the way home--Dad says it wasn't funny, but Mom praises the film's depth--and Antoine is actively engaged. 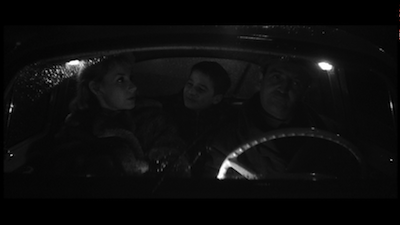 It all goes wrong after that. Ironically, in trying to do well, Antoine blunders and that is when he is bounced from school. Eventually, he gets busted for returning a typewriter he stole--another ironic comeuppance--and he is sent away to reform school. Or, as they call it, "observation center." What will be observed is the boy's behavior, and it will be decided where he should go after that. One of the best scenes in The 400 Blows is a montage of Antoine's psychiatric evaluation. Henri Decaë's camera acts as the interrogator, staring across a table at the delinquent. Antoine opens up here. No equivocation, no storytelling. With no more reason to lie, he explains himself in reasonable terms. Jean-Pierre Léaud owns the scene. He is comfortable and natural, talking directly into the lens, living every memory as if it were real. 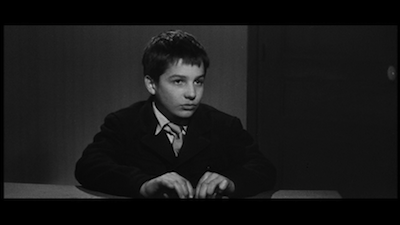 The success of The 400 Blows is really the success of Jean-Pierre Léaud. Truffaut and Marcel Moussy have written an excellent script, crafting a detailed coming-of-age narrative that is unique in its details and honest about the confusion of adolescence; yet, it's territory that is familiar and requires a true personality to sell it. Léaud commands the attention of the screen, but he never seems to be acting. His technique is transparent. He is up there just behaving. One can guess that Truffaut gave him a lot of free rein, and certain scenes suggest playful improvisation, as if the director had concocted scenarios that would encourage his young actor to be himself and roll with the moment. A sequence like the one where Antoine rides the spinning wheel can't be faked. That's really Jean-Pierre Léaud fooling around in there. 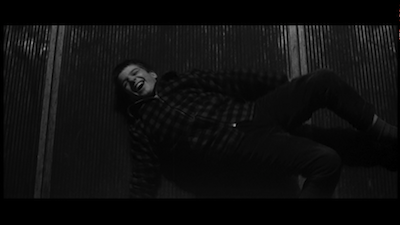 At this stage, Antoine has much in common with classic rebel figures. There is a rather obvious nod to James Dean, with Léaud more than once pulling his black turtleneck up over his mouth. Yet, unlike, say, a Holden Caulfield, Antoine still has a certain amount of innocence--he is scared to go to hookers; he is oblivious to the wrongness of plagiarism--and lacks a destructive nature. He never really resorts to violence or random vandalism; there doesn't seem to be a desire to obliterate the self. His problem is he's itching to do something, anything, and he's not sure what that would be. He is waiting for his "Eureka!" moment, the one he read about in Balzac (quoting Archimedes). 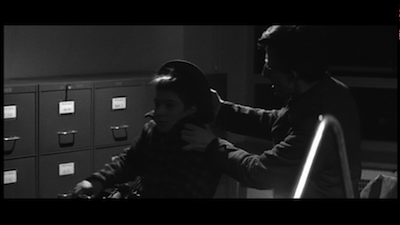 No discussion of Antoine's coming of age or of The 400 Blows is possible without talking about its ending--so cover your eyes if you haven't seen the film, here there be SPOILERS. The last shot of The 400 Blows is a famous one. After escaping from the reform school, Antoine keeps running until he reaches the sea. On the beach, he heads straight for the water. Is there freedom out there in the waves? Or could this be a suicidal impulse? Neither, probably. Léaud's face is almost blank. He is drawn by the metaphor of the open sea, but driven by impulse more than conscious design. Regardless, Antoine actually stops before going into the water. He stops and turns, almost as if called, and looks directly at the camera. Freeze frame.

We are left to ponder Antoine's expression. It's ambiguous. Some might argue it's hopeful, others might argue uncertainty, but for me, it suggests he has had some kind of "Eureka!" moment at last. He has reached the edge, and peered out into the openness and realized there is nothing beyond him, only what is behind him. He has his freedom, but it lacks definition. He might have undone the shackles, but now it's up to him to make something of himself. There is no one else who will do it for him. It's the same thing we see on the faces of the newlyweds at the end of The Graduate [review]: this is not what was promised.

Will he take those next steps into manhood? Will Antoine Doinel become an adult? Only time and the next movie in the series will tell... 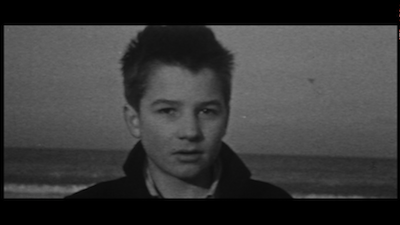