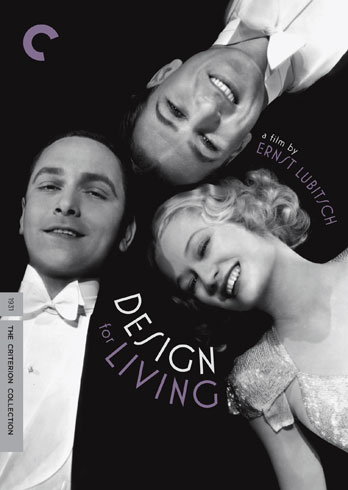 The first scene of Ernst Lubitsch’s 1933 romantic comedy Design for Living is so perfectly composed, it tells you everything you need to know about the film’s trio of main characters and their relationship to one another before any of them even speak. A blonde woman enters a train car to find two men asleep, shoulder to shoulder, heads back, leaning in. She is amused by their pose, and, sitting across from them, she pulls out a sketchpad to draw them. When she is done sketching, she goes to sleep, too. She puts her feet up on the bench between the two men, her decidedly feminine shoes nestled between their masculine frames. One of them drops his hand in his slumber, and it rests on her ankle. The other fellow leans in closer. Here we have a classic love triangle.

The girl is Gilda Farrell, a commercial illustrator played by the delightful Miriam Hopkins (Trouble in Paradise, Virginia City

), two not entirely successful Americans living in a flop in Paris. Gilda is American, as well, but unlike the boys, has a successful career. Banter comes naturally, as does romance. On two consecutive days, Gilda has a date with each man. As she explains it, George makes her feel all heated from head to toe; Tom’s fires start stoking down at her feet and work their way up to her head. Both men fulfill something different for her (in a sense, one is brawn, the other brains), and so she proposes that she not choose between them, or ask them to sacrifice their friendship. Instead, she will date them both simultaneously. 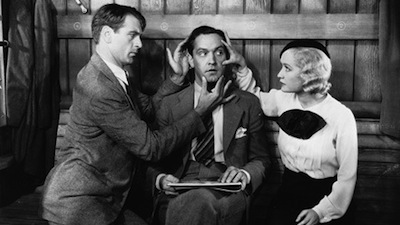 Design for Living is based on a play by Noël Coward, and adapted for the screen by Ben Hecht (Notorious [review], His Girl Friday

). Lubitsch helmed the production before the Hayes Code, and so Design for Living maintains a surprising frankness. Coward created three intelligent characters who choose an unconventional method for cohabitation, and rather than shying away from it or moralizing, he lets the love story play out. The dialogue is witty and biting, establishing believable connections between all three participants. The tone is erudite, the jokes snappy and clever, and the overall philosophy progressive. Gilda is an example of early feminism in cinema: she has her own income, and thus her independence. When she suggests the open relationship, she states quite clearly that if she were a man, she’d be allowed to sample as many partners as she liked without having to settle. Why shouldn’t a lady be afforded the same luxury?

In fact, the pact between the triangle is referred to as a “gentleman’s agreement,” though the terminology will prove troublesome. The three swear off sex. Not even kissing is allowed. Instead, Gilda will put her energy into helping the men’s careers, judging their work with a harsh critical eye until they are good enough to sell. In more conventional terms, a sort of domestic partnership is created, with the three living together, honoring the pact, keeping each other honest. Thomas is the first one to have success, with his play being picked up for a production to London. (In another example of pre-Code frankness, Gilda connects Tom with a gay producer; if his sexuality weren’t evident in his decidedly non-caricatured flamboyance, Gilda’s crack that he’d like the script because it’s “a woman’s play” is an amusing tip-off.) This leaves Gilda and George alone, with no buffer between them. As Gilda says, moments before giving in to her sexual impulse, “It’s true we have a gentleman’s agreement, but unfortunately, I am no gentleman.” 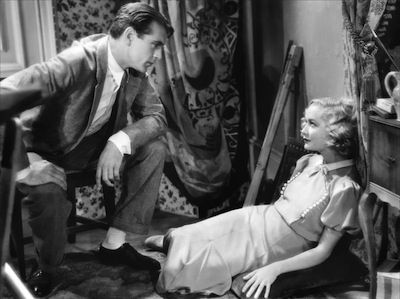 This, of course, brings complications. There is a back and forth of temptation. Gilda really does love both of them, and there is no choosing one or the other for her. Thomas’ return from London, where he finds his old friends living in luxury following George’s blossoming as a painter--in fact, George is out of town--turns into a tough display of feelings and then a randy expression of lust. Thomas’ old typewriter serves as a rather effective visual metaphor for their mutual sex drive: only Gilda can ring his bell.

Miriam Hopkins is wonderful in this scene, as she is in the entire movie. She is confident and charismatic, feisty with a cutting tongue, and also perfectly feminine. She doesn’t sacrifice beauty or glamour for career, and her nurturing of the two manchildren in her care even supports more “traditional” interpretations of male-female relations. The only thing she has to give up is sex, but that’s not to have a life denied women, it’s to have the life they all three pursue in the face of conflicting social mores. Hopkins provides Design for Living’s center, and the others all orbit around her. March and Cooper make an excellent comic team, perfectly cast in their opposing yet complementary roles. March is droll and a little smarmy, while the towering Cooper is clumsy and blunt. Their expertly timed back-and-forth absolutely sells the completeness of their friendship. 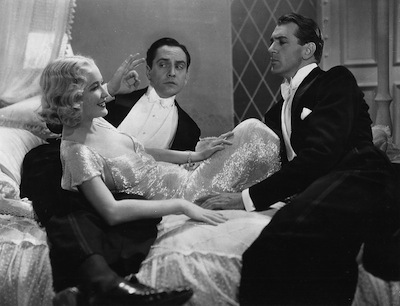 A friendship that Gilda ultimately won’t sacrifice. She leaves them rather than destroy their bond, and she ends up marrying her old boss. True domestic bliss is not to be had, however, as sublimating her will to be the dutiful wife is not in Gilda’s nature. It’s rather sly; Design for Living validates and promotes equality amongst the sexes by removing the sex. Which isn’t to say that man and woman can’t have a physical relationship and the woman not be allowed to be herself within it--Gilda could have had that with either of her suitors--because where the characters end up ultimately lends support to monogamy, as well. The three lovers here are pursuing something imperfect, but possibly more pure. A Platonic ideal, perhaps. An artistic existence. Artists tend to live outside of the norm, after all, dedicating themselves to their work in a way that is usually beyond the understanding of their friends and family. It’s that creative exuberance that Gilda is afraid to extinguish, just as much as she is afraid of destroying the men’s friendship. “Stay an artist,” she tells George when she’s leaving him. “That’s important. In fact, the most important thing.”

Gilda can’t be an artist with a man who would be her boss. She can only be who she is with men who see her as a peer.

With as much as can be read into Design for Living, its true achievement is that it’s never didactic. Though I’ve been pulling subtext up by the roots for this essay, Lubitsch is careful to make sure that it always remains exactly what it is: subtext. The up-top is important above all: the relationship and the interaction of the characters. Design for Living is a facile romantic comedy, full of hilarious one-liners and even funnier escalating, conversational jokes. One need never pause from the laughing to think about all that’s going on. The laughter on its own is enough. This, surely, is the quality that Preston Sturges wanted us to remember when he namedropped his fellow director in Sullivan’s Travels [review]. John L. Sullivan wanted to create motion pictures that mattered, and had he known Lubitsch’s work, he’d not have had to travel so far to discover that all you had to do was leave the audience smiling, and that mattered enough. 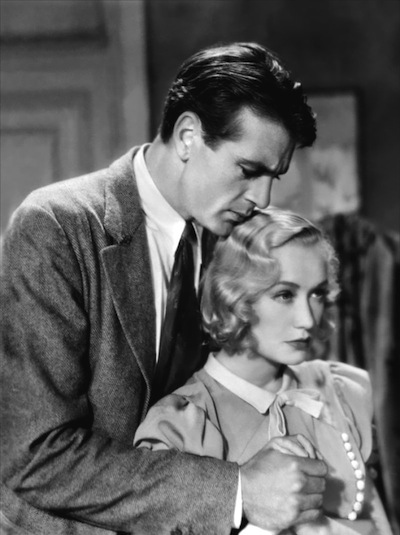 It’s amazing to think that the first time I saw Design for Living, it was buried on a cut-rate Gary Cooper boxed set, given little fanfare next to some of his historical adventure pictures. Thank goodness Criterion saw fit to rescue it and give the film its own release. The Blu-Ray restoration looks fantastic. While not all lines and scratches could be whisked away, the high-definition resolution is otherwise flawless, light years away from the banged-up, dark transfer on the old disc. If I recall, that one had a soundtrack full of hiss, as well. Criterion’s uncompressed mono has nary a crackle.

Also of note on this disc is the inclusion of a two-minute sequence Lubitsch contributed to the anthology film If I Had a Million in 1932. “The Clerk” stars Charles Laughton as, well, a clerk who receives a check for a million dollars. While merely just a gag piece, the comedic business here is flawlessly executed, working a slow-build to lull the audience into a comfortable spot before hitting them with a rather simple, silly, and effective punchline. Even at such a short running time, Ernst Lubitsch manages to say it all! 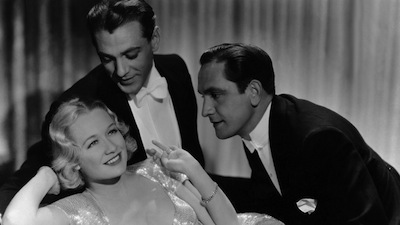 For further reading, please visit Kim Morgan's site and her piece on Design for Living (also included in full in the disc's booklet). It should be noted that I took some of the images here from Sunset Gun.
Posted by Jamie S. Rich at 12:16 PM