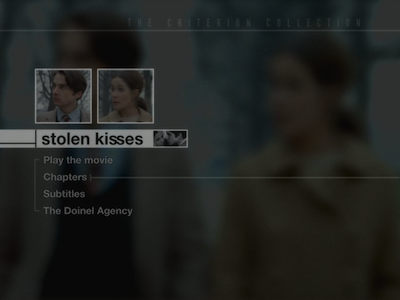 The second entry in the Antoine Doinel series is actually a short segment from an anthology film featuring directors from around the world telling stories about first-time love affairs. Made in 1962 and running just thirty minutes, Antoine and Colette picks up with Antoine a few years after The 400 Blows (and it's included as a bonus on the 400 Blows DVD [review]). He is 17 and on his own. He has developed a love for classical music, and he works at a record company, first inserting the platters in their sleeves and then hand-pressing the albums himself.

He spends his nights going to music performances and lectures, and that's where he spots Colette (Marie-France Pisier, Diary of a Suicide [review]). She is a fidgety girl and doesn't really seem focused on the performance, but rather than see that as a red flag, Antoine is drawn to her. He starts to look for her at shows, and eventually talks to her and befriends her. Truffaut captures the excitement and confusion of young love, both in success and failure. Antoine spends much of Antoine and Colette aimlessly yearning, wandering the streets and waiting for Colette to come home, waiting for her to notice him, waiting for his attentions to be rewarded. He makes progress, but also makes a fatal mistake in moving into the apartment building across the street from her family and befriending her parents. 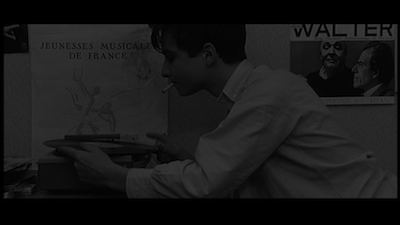 Jean-Pierre Léaud gets the restlessness and the empty pain of infatuation. Antoine appears lost and indecisive for most of the movie. This, to my experience, is accurate. Likewise, Marie-France Pisier's inscrutable behavior is going to be recognizable to anyone who has ever had an unrequited relationship, regardless of gender. There is something about how she is both engaged and yet absent, not really committed, that makes her appear unfathomable--though if you really watch, Antoine's lack of understanding is just denial. The signals are there if he'd choose to receive them.

Truffaut and cinematographer Raoul Coutard manage to create a light, breezy tone with their visual storytelling. The way the screen boxes off certain elements of the frame, zooming in on specific details while the rest goes to black and setting up a transition, comes off as both old-fashioned and playful. It is a kind of seduction, the filmmakers leading us to what they want us to see, suggesting where we should apply our attention, while enticing us with the mystery of what might appear when the image is restored. 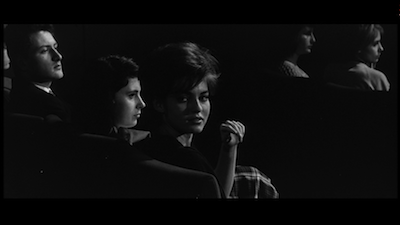 This same technique is used once in the second full-length Doinel picture, 1968's Stolen Kisses. This follow-up makes for a more natural double feature with Antoine and Colette, as our hero is suffering from the same romantic maladies that plagued him six years prior.

Stolen Kisses opens as Antoine is being discharged from the army. He has spent his enlistment either in military prisons or escaping and going AWOL, proving that once he is back in an institutional system, the boy behaves the same as ever. Fed up with his antics, the army is sending him back to civilian life. Antoine immediately falls into his old routine, including pursuing the girl whose hot-and-cold indifference caused him to run away to the military in the first place. Christine (Claude Jade, Hitchcock's Topaz

) is so like Colette, we'd think that Truffaut just swapped the girl's name when he swapped actresses if it wasn't for the Colette cameo midway through the picture. Whatever relationship she and Antoine had before the army, he has been relegated to the friendship zone, no matter how hard he pushes. Antoine doesn't know what to do. 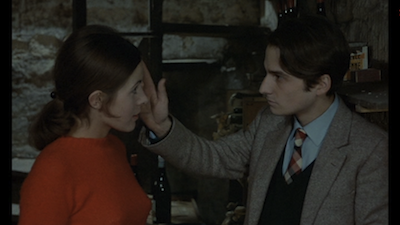 Things take a turn for the better when Antoine joins a detective agency. Though the cases tend to involve mainly following other people around for ludicrous and selfish reasons, it gives Antoine a sense of purpose. Ironically, it's when he got embroiled in an adultery case while working the front desk of a hotel that Antoine got the investigator job, and it's also adultery that will be both his undoing as a private eye and allow him to succeed as a lover. While undercover in a shoe store in hopes of finding out why everyone hates its owner, Antoine is enchanted by the boss' wife, an elegant older woman played by a radiant Delphine Seyrig (Last Year at Marienbad [review]). She responds to Antoine's fumbling affections, and though Christine doesn't witness their scandal first-hand, she does sense the tide has shifted. As these things go, when her admirer stops being a sure bet, she suddenly wants him. (It also probably helps that his being ushered into manhood this way makes him less needy.) 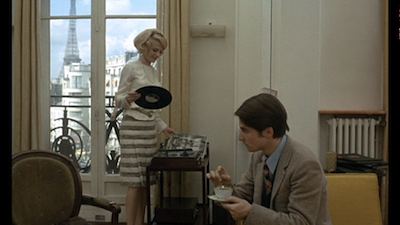 There is a lighter quality to Stolen Kisses than was evident in either The 400 Blows or Antoine and Colette. It's more fleet of foot. Truffaut applies the most delicate of comic touches to much of the movie, allowing for brief moments of physical comedy as well as the semi-ridiculous scenarios that the detectives sign up for. Léaud is charming and natural regardless of the situation (at times maybe too natural--the way he keeps pushing his bangs back was driving me nuts). He is a clumsy romantic lead, too overcome by passion to ever be suave. His declarations regarding Seyrig's character are overblown and silly, and his physical advances toward Christine--as they were with Colette--are desperate and pushy. The "stolen" descriptor is literal, that's how he kisses! 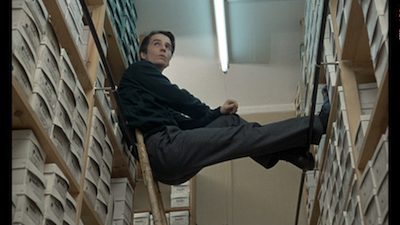 Christine is more sympathetically written than Colette. Her rejection of Antoine makes much more sense, he's got a lot of growing up to do. Nevertheless, her transformation is maybe a little too easy. Perhaps it would have been more convincing had she seen more of Antoine's education in the arms of the shoe lady, rather than just having a change of heart the first time she discovers he is unavailable. Actually, it's not just the bedroom business between Léaud and Seyrig that is missing--for a sexy romantic comedy, Stolen Kisses is almost completely lacking in sex or physical contact of any kind. It's as if Truffaut used up his flesh quota at the start when he showed the cheating wife's breasts.

Despite the chaste distance between the movie's lovers, Stolen Kisses is agile and entertaining enough to keep that from mattering too much. The maturing Antoine Doinel is every bit as charming as he was when young, and there is a looseness and unpredictability to Truffaut's plotting that keeps us wanting to know what happens next. 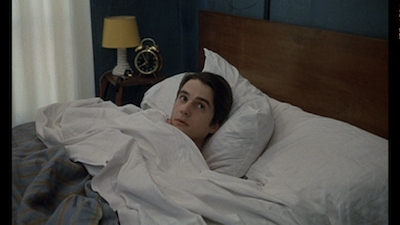 Since my Adventures of Antoine Doinel reviews began on a personal note, I'll keep it going by mentioning I had a similar experience to the one Antoine has when he runs into Colette in Stolen Kisses. In the years that have passed, Colette has gotten married and had a child. The husband/father is the guy she jilts Antoine for at the end of Antoine and Colette, no less. Seeing her this way only serves to irritate Antoine, and not just because he's on a stakeout.

I had a similar girlfriend, one who was seemingly unwilling to define just how much of her affection she was prepared to send in my direction. I pursued her for quite a while, including enduring a period where it was between myself and another guy. He ultimately won out, and they got married. I ran into her many years later in a supermarket, and she had her husband and children in tow. Rather than reviving the heartbreak that had ravaged me when we split, seeing her in that way just made me feel relieved. She looked tired, and frankly, what I saw of her life in just that brief glimpse made me tired, as well. This was a fate I had escaped. Perhaps there is something more to Antoine Doinel's propensity for breaking out of prisons than is immediately evident...?

Two more movies to go before I can be sure! 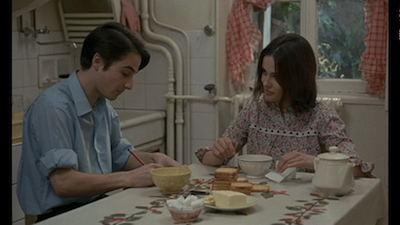